One of the most anticipated launches this year from Vertigo. Reader discretion is advised… 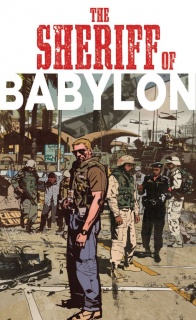 Baghdad, 2003. Florida Police officer-turned-military contractor, Chris Henry is tasked with training a new Iraqi police force. When one of his trainees ends up dead, Chris is forced to team up with Nassir, the last remaining cop in Baghdad. Pulling the strings to bring them together is the mysterious Sofia, an American-educated Iraqi who has returned to take control of the city’s criminal underworld. This miniseries is a thrilling wartime crime drama told amid one of the most tumultuous times in modern history.

THE SHERIFF OF BABYLON is a new eight-issue miniseries pulled from GRAYSON cowriter Tom King’s real-life experience as a CIA operations officer and is illustrated by Mitch Gerads, cocreator of The Activity

When I was in college, the United States was on the verge of war with Iraq. Meanwhile, on the other side of the region, they were battling in Afghanistan. I thought to myself, why Iraq? What is that going to do in the long run? I immediately sought out my copy of “The Art of War” and found the above quote from Sun Tzu. The point isn’t do destroy your enemy, it is to defeat them without harming yourself.

Chris Henry is much like a Sun Tzu follower. He is a police officer sent to Iraq to help train the new Iraq police force. Henry feels the futility in this process, but he is in it for the long haul. When he is confronted with a situation at the camp, he uses all of his skill to defuse the situation. However he finds out very quickly things work different in this world. On the other side of the new Iraq, Sofia is attempting to carve out her stake in this new world. And finally Nassir, a man who is loyal to Saddam Hussein but crushed by the loss of his daughters. These three are the future of the new Iraq.

Without giving a lot away, Tom King has created an incredible mystery and world based on his own experiences. King does not shy away from telling things like it, which is refreshing and off-putting at the same time. There are no grand political gestures, things are presented as they are seen. The Chris Henry character, essentially is King, although with a different background. From the first introducing, Henry is portrayed as a fish out of water. While being a police officer and a solider are in 2015 the same, in 2003 the lines were more separated. When Henry goes into the tent where they alleged suicide bomber is, he uses his training to handle the situation. Rather than go in guns blazing, he attempts to reason with the bomber. While it is totally unclear what her motives are, King doesn’t let Henry get bogged down in the politics of it. After the would-be bomber is shot, Henry is left to contemplate why he is doing what he is here in Iraq.

Where King shows off his story telling mastery is with Sofia and Nassir. Both are native Iraqis, who are simply trying to survive in this new jungle. Sofia is calmly ruthless, understanding that she needs to be strong in order to survive. King does not let her mince words at all, she is here for results and she will get them. On the flip side, Nassir is someone who has been ruthless under Saddam for so long, that he is starting to show cracks. Without spoiling, there is a fascinating moment during his introduction when Nassir is a character with incredible depth. All three are realistic, with flaws and areas of excellence, making it hard to judge them for their actions.

Enhancing this is the gorgeous work of Mitch Gerads, who also handles the colors this time around. The colors are sun drenched, making the reader feel like they are right in the middle of the desert. The sweltering heat is a character, showing the difficulty everyone has in this unforgiving terrain. The same can be said for the violence in the book, which has a disgusting sense of realism. Blood is splattered, bodies are damaged and it is show in all its glory. Gerads does not shy away from showing the true horror of war, or in this case human to human violence. There is a real sense of danger viewing these things, almost as if this were the storyboards for a documentary.

Gerads gives excellent facial expressions and superb body language to each character. Henry’s reaction to the death of the bomber reflects this perfectly. Henry has his hands behind his head, showing his frustration to his situation. The same can be said for Sofia, who has her eyes down and keeps her body stiff during a ruthless execution. Little details like this sell the idea of the dangerous chess game all are in. However, my favorite panel(s) come near the end of the book which is one of the best piece of art this year. The page is broken down into three very evenly distributed panels. On the top is Nassir, the middle Sofia and the bottom Henry. Each of them have done something and all have a different reaction to the outcome. All three are looking away or down, so the reader cannot see their eyes. To show how connected they are, a phone is ringing inside of each panel. This is a masterful stroke of genius, with a subliminal hit to show no matter what you do, you are a part of this here.

Another highlight is the amazing background detail Gerads is able to render. Showing Baghdad as the crowded city is no easy task. The vastness of it along with the campiness is done amazingly well. Gerads shows things from both an up high level and ground level. Both perspectives put the reader in the story, which is something I really enjoyed. All of the military equipment is done with amazing care as well. That shows how much research Gerads did prior to drawing this book, adding to the overall feel King was going for. Seeing this first hand is an incredible sight to behold.

Finally from the art perspective, I would be remised if I did not include JP Leon. Leon is a cover artist extraordinaire who I first found from “The Massive.” Leon, like Gerdas, has an amazing level of detail in his work. Henry is front and center, but Leon gives a lot of stuff to look at. There are the famous Swords of Qādisīyah in the background, solider, helicopters and the remnants of the ongoing conflict. Leon packed the entire story thesis into one image. If my thoughts on the story didn’t sell you on this book, judge the book by the cover. That should win you over.

At the core of the story, there is a murder mystery. King & Gerads do not make it 100% clear who the culprit is, which sets the issue’s finale in motion. By showing the individual lives and actions beforehand, setups a ton of intrigue as the story unfolds. In the back of my mind, I am going to think it could be anyone of these three, even if that is not clear. It keeps things from getting stale that is for sure.

Beyond that, this could have easily been a political story getting into a lot of details. Happily, that is not at all the case. I could see that being a point to drive readers away and understandably so. The political situation is merely a backdrop to the mystery. Where my curiosity is piqued, is if King will bring any kind of clarity 12 years after the fact. That might be jumping ahead a bit, but there is still plenty of time to make a statement with the story as a whole. Even if he doesn’t, “The Sheriff of Babylon” is the type of outside story comics are made for. Regardless of your political affiliation or feelings, this is a look at the circumstances after the invasion. To once again quote Sun Tzu, “If you know the enemy and know yourself, you need not fear the result of a hundred battles.”

Final Verdict: 9.7 – Without question this is one of the best single issues for a new series in 2015. The intrigue, realism, violence and overall feel are incredible. Tom King has done a masterful job of creating a tense story without a lot of political overtones. Mitch Gerads knocks it out of the park with phenomenal details and excellent style. Highly recommended!