At the time of this writing, stories have flooded the media in response to the Trump administration’s “travel” ban against seven majority-Muslim nations. Stories told by American veterans about self-sacrificing Iraqi interpreters seeking a promised welcome in America. Or news profiles of refugees now waylaid by blunt policies after years torn from their homes and families. Against partisan fearmongering predicated on faceless “others,” these stories always take care to say the names of the people they describe. Saying their names seems the minimal decent thing to do.

In Tom King and Mitch Gerad’s “Sheriff of Babylon,” protagonist Chris Henry sits across a coffee table from Bob, the flippant and unctuous American “Green Zone security” agent.  As Bob makes cold reference to the human collateral damage around them, Chris insists that he say their names: “Her name was Fatima,” he says, straight-faced.  “Ali. Ali Al Fahar.” It seems the minimal decent thing to do. 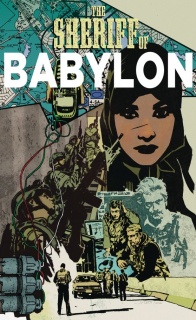 Written by Tom King
Illustrated by Mitch Gerads
In these chapters from THE SHERIFF OF BABYLON #7-12, things are heating up in Baghdad. What started as the search for one man’s killer has turned into something much deeper, and everyone lost something in the violence that followed. Now Nassir is in the hands of the men who may have been responsible for all of it. What they want from him is unclear, but it’s a payment they intend to take in blood. Deals with the devil rarely go right, but in Baghdad, the wrong deal could get lots of people killed…

This decency is doubly important because, rather than a slick SEAL Team, special ops story that reads like a mindless first-person shooter, “Sheriff of Babylon” is about something much weightier than “winning”: the specific indecencies of the American presence in post-invasion Iraq. It’s all distilled through a small group of characters, primarily the three principals at the center of King and Gerads’ twelve volume war noir. There’s Chris Henry, American police trainer; Sofia/Saffiya, US-educated Iraqi peace and power broker; and Nassir, an ex-Saddam enforcer whose fierce devotion and necessary compromises make him perhaps the book’s most fascinating figure.

The trap in representing this morass of embroilments through a small cast is to reduce characters to thin proxies for parties or ideologies. Instead, King and Gerads draw these three with enough ambiguity and faltering intentions to keep them convincing yet unpredictable, right through to the story’s taut end.

Indeed, the second half tightens the plot even more wrenchingly on the principals. Nassir’s troubled backstory, Sofia’s impossible bargains, and Chris’s slow-dawning helplessness converge into a perilous plan that produces two new triads of tensions. One is a scene of Sofia, Nassir, and another Iraqi, brilliantly stretched out over multiple issues like a Russian play. It’s three talking heads in a room, yet as rife with tension as any in comics. The other new triad that brings the story to its climax is the backstage of the American mission, with Chris, Bob the NCIS blowhard, and Franklin the middle man, whose managerial calm belies his out-of-its-depth operation. These three Americans metaphorically triangulate the coordinates of the road to hell paved with US military intentions.

Tom King has admitted in interviews that “Sheriff of Babylon” began as a novel, pitched to unresponsive publishers, before he converted it into the Vertigo project that has been part of his rise to comics prominence.  In this and his other two 12-issue opuses (“The Omega Men” and “The Vision”), King speaks in crafted formalisms, more an architect than a documentarian. In my opinion, the creative team pulls it off, never giving me the impression this should’ve stayed a novel. “Sheriff” is Alan Moore dipped in Kathryn Bigelow, an emotionally explosive batch of turmoil bursting at the seams of its nine-panel grids and rhythmic widescreen close-ups.  (Witness issue 8, four pages fixed on Saffiya al Aqani on a cell phone, Gerads’ posing and Travis Lanham’s letters adorning King’s utterly gripping text.) Gerads’ desert-desaturated and limestone-filtered compositions are brutally perfect, the visual storytelling equivalent to the hectic elegance of the John Paul Leon covers. Early in the series, one issue’s backmatter revealed how Gerads poses himself and family members for photo reference, and yet the characters never betray any falseness or artifice, a credit to Gerads’ mastery of just the right bodily moment, just the right scene framing.

Perhaps the most satisfying aspect of the story is this: At the story’s start in the first arc, Chris is our POV character, but by this arc, Nassir and Sofia have undergone such personal pain and political indignities that they have wrested our sympathies, if not the control their characters jostle for in the turmoil of their homeland. As an American reader, I am grateful their names have left a more indelible imprint than “Bob” or “Jim,” that they are at least equal partners in the dance of trios that King and Gerads spin around any simplistic notions of the parties in Iraq’s struggle.

The second arc’s hinge point, issue 9 (‘You’ll Hang Here’), opens with a scene that’s such prescient political caricature that its glad-handing hucksterism will leave you wanting to wash with soap. Notwithstanding the creators’ not-so-subtle ironies and juxtapositions (narrative captions of “George Washington” over paintings of Avicenna, Nassir’s “SDPD” and “Army” t-shirts during debasing interrogations, etc.), “Sheriff of Babylon” carries out its own collapse of confidence with pitch perfect emotional devastation. In issue 10, when the Chris/Franklin/Bob triad tries to decide how to proceed in a muddled mission, the self-congratulatory Bob declares, “It’s on. It’s so on,” while a horrified Chris mutters “Jesus,” the opposite poles of the impossible situation.

And without spoilers, the poignancy of the titular “Pow,” from the arc’s beginnings to its final pages, leaves the sordidness of war’s violence as fraught as ever, yet always with the tantalizing possibility of sweet redress that pulls us back again and again into its grip.

By now we’re wise to Tom King’s tricks, and they’re less fresh here now that we’ve seen them elsewhere. I was high on Vision’s tragic synthezoid ennui, entranced by the astropolitical intrigue of “The Omega Men,” and even content with the recent King and Gerads “Batman” efforts. But for my money, “Sheriff of Babylon” is King’s truest work, where he is on the surest footing, even as he and Gerads pull us into the moral sands of war’s complexity.

Final Verdict: 8.5 – King and Gerads wind down this war tale to a gripping, harrowing end.