“Shoplifters Will Be Liquidated” #1 hits the ground running with an interesting concept, but doesn’t spend enough time stitching up the edges of its story to make for an effective first issue. Warning: spoilers ahead. 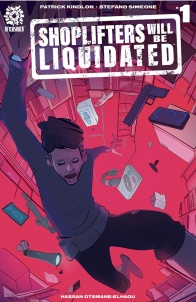 Cover by Stefano Simeone
Written by Patrick Kindlon
Illustrated by Stefano Simeone
Lettered by Hassan Otsmane-Elhaou The largest retailer in the world requires the best-trained loss prevention staff, and Security Officer Nussbaum defends the company interests at any cost. Life, human rights, rational thought are all secondary concerns. But his world is upended when he finds a society living under the retail outlet – a culture that challenges his notions about consumerism and sense of self. Is he ready for the message? Imagine Judge Dredd working for Amazon, and you’ve got a hint of what you’re in for.

“Shoplifters Will Be Liquidated” #1 hits us with an intriguing if familiar premise: late-stage capitalism’s officially taken over. The mega-store is king. If you’re not buying, you’re not truly living. Our first issue takes place in the Caucasus Superstore, where shoplifting is not tolerated. And that’s putting it lightly.

Kindlon and Simeone throw us right into the action by introducing the trigger-happy Nussbaum as a protagonist and a nameless and very unfortunate shoplifter as his first victim. Though the concept is great and the flair around the edges decent enough, the main problem with this comic is its lack of effective pacing. We don’t get too much interiority except for a brief training montage that’s pretty effective in demonstrating how committed he is to his job. Most of the character development’s spelled out in dialogue, and we’re juggling a few too many characters in this first issue for any of them to really stick. It’s unclear how important Lance will be or how interesting he will be, either, and Nussbaum’s superior doesn’t seem entirely believable in some of her more violent dialogue. Still, there’s an element of chaos that runs counter to Caucasus Superstore’s ethos, and while it might not be entirely intentional, it mostly works.

Nussbaum’s proclamation at the end doesn’t seem merited, however, even though he’s stated several times in this issue that he’s a company man, and dedicated to his job. A few more visual cues would suit well here, as well as an indication that he’s physically adept. He’s a bit too spindly to be believed as a physical force, and his dedication is questionable given the reliance on dialogue to communicate the character trait. We’re left wondering if he’s trying to convince himself when the intention is to show zealotry, and that’s a bit of a mixed message upon which to build a convincing storyline and character twists that’ll come down the line. There may be time to build that focus up into something compelling and heart-rending, but as the book stands now it’s not clear where we’re headed in terms of believability.

Simeone’s style flirts with unnecessary roughness and odd angles at times, but the general effect is decent given the subject matter. It’s an off-kilter world, so off-kilter angles suit. The first page features a 9-panel grid that’s done pretty well in that the three strips marry plot, physical details and colors, and the final spread is a nice reveal even if it lacks a bit of plot punch given its abruptness. However, facial details are hard to parse when they change dramatically from panel to panel, and several of the characters are easy to confuse given the limited color palette. Sticking to blues and reds means the backgrounds lose some intricacy at a distance, and the overwhelm becomes less about the unending stream of consumer goods and the violence around them and more about the blur on the page. The colors do add an appropriately clinical mood, but a confined location means that it all blends together pretty quickly.

Otsmane-Elhaou’s work on this issue is a bit disappointing. There’s a lettering problem in the first panel that sticks out immediately and should’ve been caught by someone before going to print. The final letter in the second line of dialogue bleeds out into the gutter and breaks the panel border. Add that to some balloon butting that appears to show an edge against the top of the panel and what’s now a pretty recognizable font, and what should be a polished finish disintegrates a bit. Kindlon gives Otsmane-Elhaou too much dialogue to contend with, which is a common issue, but the butting is strange and sticks out because it’s such an anomaly. The font doesn’t necessarily clash with the art, but it’s either a go-to or a slight variation on one that doesn’t give us too much visual interest to balance the problems in this issue.

Overall, “Shoplifters Will Be Liquidated” #1 is a book that feels a bit rushed, both in plot and in production. Simeone’s art style is angular and strange enough that there needs to be tighter control on character development, plot details or pacing to help it really shine. Kindlon relies too heavily on dialogue as a tool in this issue and punctures some of the tension with repeated violent interactions. Stripping out a few of those would make the final scene resonate a bit more, and give us more insight into Nussbaum’s psychology and character. He’s unlikeable, but there are ways to make that earned. Nussbaum hasn’t entirely earned our disgust or disdain just yet, which means the sympathy we might need to dredge up later on won’t be earned either. Still, there’s clear intention to make this a skull-crushing, melodramatic story all about consumerism, and it’s interesting enough to give it another issue or two to see how things pan out.

Final Verdict: 6.0 – “Shoplifters Will Be Liquidated” #1 goes for edgy too soon and stumbles a bit because of its zeal.