“Sideways” #3 continues to explore and expand on the origin, characters, foes and supporting cast of Derek James. With an issue that does not slow down, it is hard to tell apart where the series is succeeding on creating a compelling new corner of the DC universe . . . or if it is only treading familiar comic book waters in a fresh coat of paint. 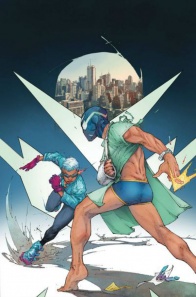 Life is moving pretty fast for Derek James…and unfortunately, things are about to get even faster as he is forced to fight a super-speedster hell-bent on destruction-all while wearing no pants! Can Sideways move through space and time quick enough to stop a new villain born out of the recent Speed Force Storm: Killspeed? Also, what better way to learn about Derek’s powers than right from the horse’s mouth-featuring a backup story hosted by Sideways himself!

One of the initial series to launch under the ‘New Age of Heroes’ imprint by DC, “Sideways” has, for the first three issues of its inaugural arc, tried to establish Derek James and his Sideways alter ego as a young, modern teen, going through the trouble and trials that follow an inexperienced individual obtaining amazing powers with little training or preparation. But by trying to use every tool at its disposal, the creative team loses its focus more than it controls it, making this arc, and this particular issue, disjointed.

Starting with the positive, there is not enough praise for Rocafort as an artist. There seems to be little that he cannot make look exciting, from the typical end-of-the-world scenarios (complete with lightning storms and bus explosions) to the absolute mundane (the interior of a hospital, complete with patients in light green gowns). Rocafort is particularly effective in the way that he uses Sideways’s powers to mash with his panel design: as the hero uses his abilities to create portals across dimensions, so do the panels on this issue open up. In one particular scene, Derek James is seen opening his gates in similar hand gestures as one amplifying his images when browsing through a smart phone. These are very interesting visuals that really seem aligned with the narrative at hand.

Colorist Daniel Brown is another important piece of the larger art package. While not particularly inventive, Brown is at his best when making each character skin tone unique and beautiful, as well as on the more explosive moments, being able to imprint a specific energy signature to Sideways’s powers and making it stand apart from the other lightning and explosions filling the page.

It is, however, on plotting and dialogues that “Sideways” #3 comes short, in similar fashion than the other first issues of the series. While one can argue that all superhero stories have already been possibly told (in one shape or another), here those similarities are too obvious to not let it influence the enjoyment of the final product. Sideways’s powers are almost identical to Marvel’s Blink. Derek’s attitude and personal challenges are far too similar to Spider-Man’s. Even the antagonist of this issue takes an origin story from DC’s own Godspeed, at least on what comes to how her powers came to be. And, despite some direct, fourth-wall breaking comments about ‘great power and great responsibility,’ the issue does not read like a critique or study of comics, coming off simply as ‘more of the same.’

To be completely fair, there are moments where truly unique ideas come forth and they are a breath of fresh air. Despite the generic origin to her powers, Killspeed does have a reason to behave the way that she does, and that should make readers see tones of gray on her actions. Derek, despite still being in the early stages of learning to use his rifting powers, does utilise them in inventive ways, from creating mini-portals across town to pinpoint where his antagonists are, to realizing that the edges of his rifts are rock-solid and not portal-like, allowing his to use them not only as means of transportation, but also as barriers to stop his enemies. But those moments, despite their isolated surprises, are too few and far between to compensate for a story and plot the majority of the book’s audience should feel very used with. That over abundance of familiar themes and plot solutions, with a low level of self-awareness, ends up making this issue too generic to most comic book readers, without going into the creative arena of discussing these generic traits in a more questioning light.

Final Verdict: 6.5 – For a series that launched under a label that promises bold, new heroes and concepts, “Sideways” has still not found a way to be unique and relevant with issue #3. Not a bad comic per se, and with truly beautiful art, but one that seems content on telling an old story with just touches of new ideas.