The Silver Surfer has always been one of the most poignant and interesting characters in the Marvel universe, serving occasionally as a point of view for readers, and at other times a Doctor Who analog. With Jason Latour writing and drawing this one-shot meant to bring the Surfer back to the Defenders, we seem to be getting a more nomadic style protagonist, but someone still subservient to Galactus. Can Latour tell a unique spin on the classic Herald? 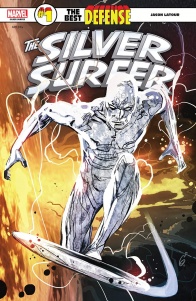 “THE BEST DEFENSE” PART FOUR! Shall not the Judge of All the Earths do right? Norrin Radd is not so certain. But it falls to him who is the Silver Surfer to decide which planets will live…and which will feed the unending hunger of the world-devouring Galactus! A single honest person can tip the balance…if only the Surfer can find one in time! And the Train rolls on…

The cast of characters assembled in this issue is a well-balanced lot, enough to give focus to the Surfer, or Norin Radd, but enough so that everyone around him feels fleshed out because of his intervention. Radd works here almost like an out-of-town Sheriff in a classical Western story. He comes in to find someone worthy of his judgment, before becoming emotionally attached in some way to the conflict of this ethereal train/meteor planet. He’s a negotiator of sorts, trying at first to bring all the scattered parties together, before rallying with the young Goldie to recover a Roxxon artifact. Radd’s interactions with Goldie are especially interesting. In Goldie, Latour has created a scrappy, scavenger type of kid who isn’t afraid to start a fight, but from what we see in flashbacks, had a troublesome mentor that has continued to live in the back of his mind constantly warning him on his every decision, often prodding him into a fit of rage. Radd balances that out, quite literally through a psychic connection that allows him to empathize with Goldie, turning him into a calmer, but still angry and rebellious version of himself. It’s a great way to depict the Surfer as the link between human and divine forces, as one who can embody elements of both to bring out the best in each.

In the vein of Jack Kirby himself, Latour doesn’t skimp on bringing high concept ideas to the table and taking them in exciting directions. The very premise of the story, that Galactus is sending Radd on a reconnaissance to check out a cosmic train that is both “from a time and space that is beyond even [his] knowing” and “A great engine hurtling across the cosmos”. From this fantastic concept, we get a setting on said “train” to explore smaller ones. The idea of a post-apocalyptic style warlord taking offers from other survivors brings a good antagonist to combat for Radd and Goldie. Not only that but having Goldie use Yaka arrows adds a little classical Marvel Cosmic lore, while the addition of a super Roxxon weapon used to kill a planet adds huge stakes that feel grounded in street-level mythology. Latour could’ve continued with this big ideas, but balances everything out at the end. We’re shown the terrifying reality of Galactus consuming a planet here with a tone that very much conveys business-as-usual, while Radd and Goldie sit by whitling sticks. It’s great that while Latour can make the big moments huge, he can also balance quieter moments even in bizarre situations.

Latour is truly a unique and masterful cartoonist, and this talent is on full display with his artistic skills here. What we’re given aesthetically here is all the madness of a Kirby drawing, yet distilled and quietened with a modern restraint that makes it feel like its own beautiful entity. We see moments of the former in scenes like the introduction of Scab Tongue the warlord-esque character. The scenery here is brimming with life, with dilapidated camps pitched in between broken pillars, and a cool-as-shit spacecraft hanging next to it, with as many bells, whistles, and angular patterns as you could ever want. However, we see more of a softer side to this worldbuilding in other scenes, too. From the first moment we appear on the Train, the scenery is painted in a detailed environment with no solid black linework, giving a picturesque and truly wonderous tone to the world we are about to explore. Similarly, Latour’s depiction of outer space is reminiscent of Kirby, but a more acid-tinged take, with every cosmic feature blending into each other like the best rainbow fever dream you’ve ever had. Latour reminds you of classic Marvel visual storytelling with his setting work but filters it through a modern lens to create something wholly original.

Of course, the action sequences in this issue are high octane. Latour injects every movement in this comic with laser-point precision, from smaller scale moments like Scab Tongue being hurled away by his neck, to grand cosmic moments like watching the Train spiral and pierce its way through the universe. In these moments, Latour also cleverly pairs back the background work, using negative space to highlight scenes like the human being pierced by Goldie’s omega beam-esque Yaka arrows. This means we get a closer attention to detail on character work too, which Latour continues to steamroll. Seeing Latour’s chunky yet stoic and intimidating take on Galactus is huge because Latour draws all the attention to his figure. Witnessing the Train’s conductor, who’s “a god unlike any before seen” is a visually satisfying not just because of the accompanying dialogue, but because Latour places him on a stark, orange and white background. But the biggest draw of the issue happens in a splash page that depicts all the major moments in Radd’s life in a carefully constructed, ornate tapestry set within Radd’s own head.

The color palettes of this issue blend cosmic and desert post-apocalyptic in fantastic ways. In the beginning, we’re safely introduced to the story with more of the former, as Latour shows us Galactus exploring new worlds dipped in soft purple, blue and green hues. The very next page, Latour explodes with fantastic beams of light, each with a soupy, crayon-like texture that looks and feels ethereal for the eye to follow. In the midst of that, we get more solid orange and blue hues for the desert scenery, in which Latour might sneak in an ornately colored dusk sky, depicting soft clouds and trickling lights. The issue is finished in a grandiose way, however, bringing back the bombastic palette from the beginning, but smudging it all together in a scene of Radd watching muted color creep out of a bleeding, vibrant galaxy. It’s clear that Latour is no stranger to this art, and this reflects heavily in his work here.

Jason Latour does classic, cosmic Marvel proud in this beautiful, self-contained story. The characters play well off each other, the worldbuiling is high in scope, and Latour’s art, pencils and colors, are dreamy, beautiful and ultimately fun to take in. If this is any indication of the quality of the upcoming “Defenders” series, then I’m all in from here.