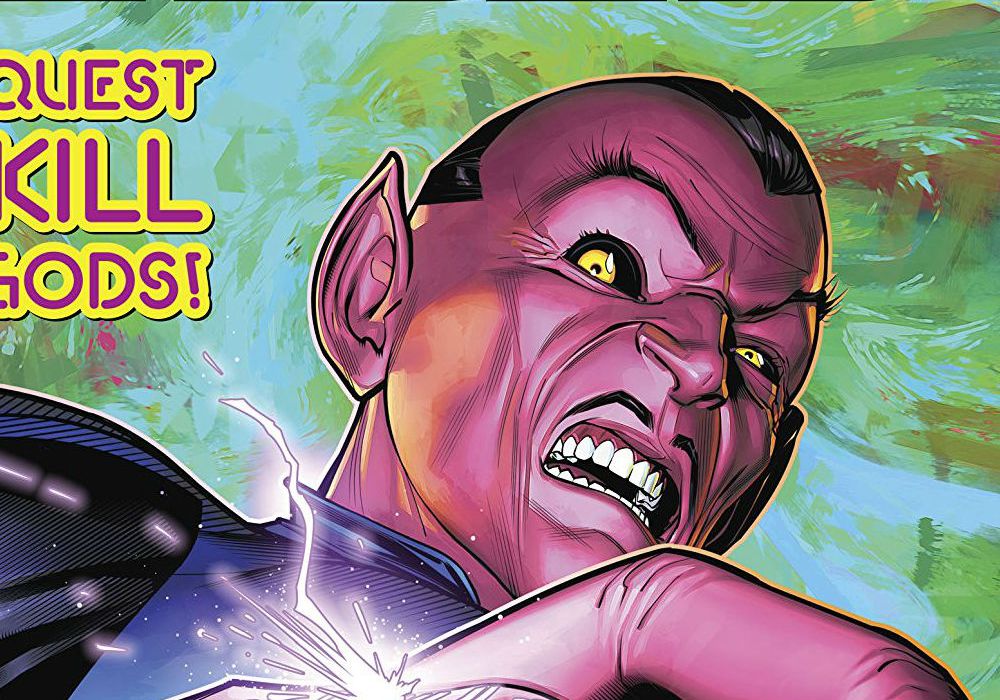 Remember when it was first announced that Jonathan Hickman was coming back to Marvel? Before it was revealed he would be writing an X-Men title, Marvel put out a simple ad. Just a date and his last name. They knew it was enough to get fans excited. DC had a similar strategy when Brian Michael Bendis came aboard. Their ad was a close-up of Superman accompanied by the bombastic text: ‘Bendis is coming!’. In both cases, you don’t even need the first name. You already know full well who they’re talking about, you’re likely familiar with their work. Even if you aren’t a fan, at the very least, you’re intrigued to see what they might do. What other writers would you get excited for, just off their last name? I like Priest. Rucka. Ewing (I mean Al but Eve’s “Ironheart” has been fantastic). Morrison. Ahmed. In recent history, I would add ‘Russell’ to that list of writers. 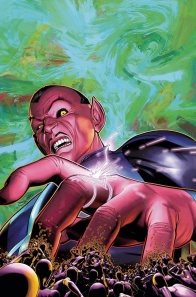 Written by Mark Russell
Illustrated by Yildiray Cinar
Lettered by Steve Wands
Colored by Hi-Fi
As the universe tilts towards doom, great forces awake in an effort to stop Lex Luthor’s mad plans. Dispatching Sinestro, Luthor sends the former Green Lantern to bring these old gods under control or destroy them before they reach Earth. Now, wielding the power of the ultraviolet spectrum, Sinestro finds his new foes even more dangerous and perplexing than he expected, when realizes any damage he inflicts is immediately repaired.

I was completely surprised that I loved Mark Russell’s take on “The Flintstones” as much as I did. While set in the Stone Age, the Hanna-Barbera cartoon reflected suburban life in the 20th century. Mark Russell updated that idea, this time reflecting our 21st century. The writer examined society, capitalism and religion and it was all hilarious and heartfelt. All of his work has been consistently good as far as I can tell. I don’t even like Snagglepuss but I absolutely loved the “Snagglepuss Chronicles”. “Wonder Twins” has been amazing. I knew that “Sinestro: Year of the Villain” #1 would be good before I even opened it.

“Sinestro” certainly has a strong story. It starts with a simple enough mission. Massive aliens called Paragons are rampaging across planets out in deep space. They present a threat to the Legion of Doom’s plans so Lex Luthor sends Sinestro to take them on. These Paragons can regenerate so the typical comic book method of dealing with problems (punching, zapping, etc.) is ineffective against them. Upon further study, Sinestro learns that these giants house entire microscopic societies. These beings, dubbed Microns, life spans only last 0.8 milliseconds and that entire time is devoted to regenerating and healing the Paragons. Unable to take on the massive Paragons physically, Sinestro has to use his intellect to take them out through the tiny Microns.

I really like that Sinestro secures victory through his mind and not his power. He sends out four copies of his consciousness to get different perspectives from the Microns. He attempts to confront the aliens with the truth of the Paragon rampages and convince them with logic but they don’t care. The Microns have such rapid-fire life spans, they don’t have the time to care. So Sinestro gives them more time, another 0.2 milliseconds. It’s so insignificant to us but that’s one-fourth of a Micron’s life span. Generation after generation rapidly passes and over time with that free time, they develop culture, music and entertainment. Some protest their work while others question the very existence of Paragons. Eventually their work is abandoned. It’s interesting that through it all, readers are given the sense that Sinestro cares for the welfare of these aliens. He’s trying to do something good in an evil way or something evil in a good way. I like ‘anti-villains’ as much as anti-heroes. Sort of like Doctor Doom, Magneto or Baron Zemo back in his Thunderbolts days. Yes, Sinestro has saved these Microns.

Then he turns heel and reshapes their society to trust and work for him so he has a Paragon in his thrall. Sinestro goes from benevolent figure to mustache-twirling villain so fast, I laughed out loud. This issue is full of dark humor like this. Comedy is subjective but it sure cracked me up. The artwork helps enhance that humor. One page shows the alien children playing with regeneration guns and at a funeral, that same gun is laid on the casket. Again, very dark but still funny. There’s other fun bits like alien hippies and hipsters, Sinestro walking away in the giant palm of a Paragon and perfectly timed exploding planets.

It’s also great how the issue explores the theme of service. The Microns serve with a religious fervor and see the Paragons as god-like beings because its all they know. The forces opposing the Paragons think the life of a Micron is sad not realizing the irony. Their lifespans are longer but the other aliens are doing the exact same thing. Meanwhile, Lex has another alien army ready to serve and die fighting the Paragons. On top of that, those that are being served couldn’t care less about the people they put in harm’s way. A single Micron doesn’t realize that he isn’t at all special to his god. The God-Emperor Garf that the other army is fighting for is zipping away from his planet’s destruction the very first page. Everyone is using or being used, right down to our protagonist. Sinestro is investigating on Lex’s behalf and Luthor doesn’t care if he dies, so long as the mission is complete. Everyone’s going to serve someone…that someone might as well be Sinestro, evil mustache and all.