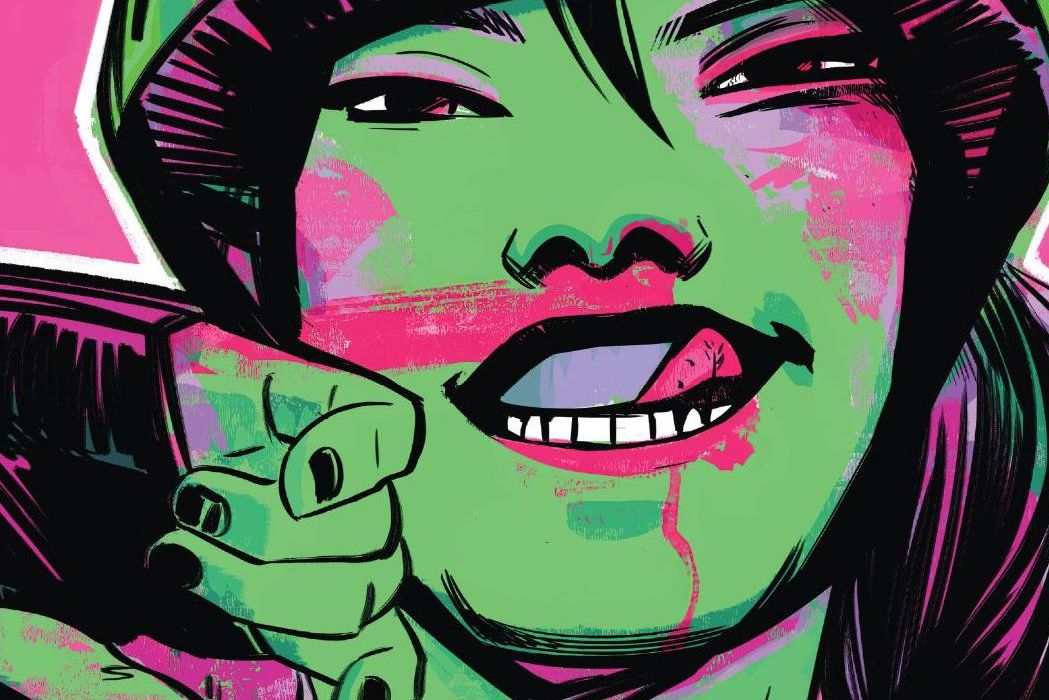 Come on and slam and welcome to “SLAM!” #1, the first issue of a new series by Pamela Ribon and Verconica Fish about roller derby, of all things. Well, it’s also about love and femininity and the rejection of societal norms over embracing a connection with one another on your own terms, but we’ll get to that. For now, it’s a comic about roller derby and it’s great.

Read on below to find out why you should be strapping on your skates in order to check out “SLAM!” #1.

Written by Pamela Ribon
Illustrated by Veronica Fish
Best-selling novelist (Why Girls Are Weird, You Take It from Here), animation writer (Moana, the Wreck-It Ralph sequel), and comics writer (Rick and Morty) Pamela Ribon and artist Veronica Fish (Archie, Silk, Spider-Woman) dive into the fast-paced, hard-hitting world of roller derby! Jennifer Chu and Maise Huff (aka Knockout and Ithinka Can on the track) have been best friends since their first day of Fresh Meat Orientation for the Eastside Roller Girls, but when they get drafted for two different teams they’ll have to figure out if the bond between them is stronger than the pull of a team when a win is on the line. You get slammed on the track and slammed in life, and in both cases you have to take your hits and get back up again!

It’s not often that sports comics come around and it’s even less often that a sports comic would focus on love and feminism. Now, before you immediately click off the tab and start searching for my twitter to send me hatemail for being a feminist, note that “SLAM!” #1 is a feminist comic in it’s own style. It uses roller derby as a backdrop for the dissolution of societal pressures that are pressed on women in order for them to gain a sense of self-assurance in attaining goals set for and by themselves. It’s about sticking up your middle fingers to the society that wants to punish them for being women before strapping on skates on putting yourself through absolute hell in the name of finding a community that will support you. Okay, now you start sending the hatemail.

What makes “SLAM!” stand out is a sense of innocence. Despite the comic being about a fast-paced and intense sport like roller derby, writer Pamela Ribon and artist Veronica Fish are more focused on the inter-personal relationship between the two main leads. The structure of this issue is built more to introduce the feeling that you get when you dedicate yourself to a sport like roller derby more than the activity itself. Building montages within flashbacks, this comic has a genuinely cinematic structure in how it uses the narration like a voiceover to these smaller vignettes that explore each girls’ lives before and after experiencing roller derby. Literally, their introductory graphics are split to show who they were before joining and who they are now.

This is less a sports comic about roller derby and more an emotional journey that explores how derby can be the emotional catalyst for taking what you want from life. The focus on two women whose lives couldn’t have been more different before discovering derby only to become the best of friends through joining is something wholly unexpected, but it works. That sense of unrelenting innocence feels almost like a political statement in the current climate of not only comics, but the world; this is a comic about women and it is a comic about friendship and love and connection through strife and striking back at the world. Roller derby is a world where women are allowed to vent their frustrations of a world that expects everything from them without the need to be perfect and feminine and beautiful and Ribon and Fish lean heavily into that.

The art team of Veronica Fish, colourist Brittany Peer and letterer Jim Campbell work perfectly on this issue. From the first page, there is a sense of visual storytelling that combines a focus on character body language, environmental design and evoking mood through colour. It’s clear a lot of effort went into how information is relayed to the reader as from this first page, you get an immediate sense of tone as well a sense of character before even really meeting the characters. Veronica Fish really comes into her own as an artist here with a softer style of linework than she employed on “Archie” which brings an almost animated quality to the page. This is brought to life by the vibrant, neon-like colour palette of Brittany Peer that nails the day-glo feel of a roller derby league.

I’ve mentioned the cinematic quality of the artwork previously and I want to note that that doesn’t mean that Fish employs widescreen panels to evoke some kind of awe-inspiring scope as we’ve come to define the term cinematic in describing comics. No, “SLAM!” #1 feels cinematic in the way Scott Pilgrim Vs. The World does. By using montages of panels, cutting from location to location and character to character, Fish gives a broad yet fast-paced encapsulation of the life of each of our main characters. It comes hand in hand with a sense of design so that when you turn the page to find each character biography in turn, you can almost see the Scott Pilgrim-esque transition with the punk, D.I.Y. aesthetic of a zine page.

This all mounts up to a sequence near the end of the comic where the reader, after seeing the backstories of our characters and seeing how they came to join the derby league, see how their lives change in a montage of panels. Not only is this where Ribon and Fish bring them together as friends and endears the reader to their friendship, but the design of the pages that shows the panels like scrapbooked memories taped to a wall brings an intimacy to the world. Maybe it’s because I look at the world through the lens of being a lesbian, but this could very easily have been the start of a romantic love story as much as a story about platonic love. Either way, simply having a comic that’s accessible to anyone and everyone that’s about femininity and love and how embracing both doesn’t mean being a perfect flower child and sometimes means putting on skates and hot pants and putting yourself through hell is progressive as hell these days.