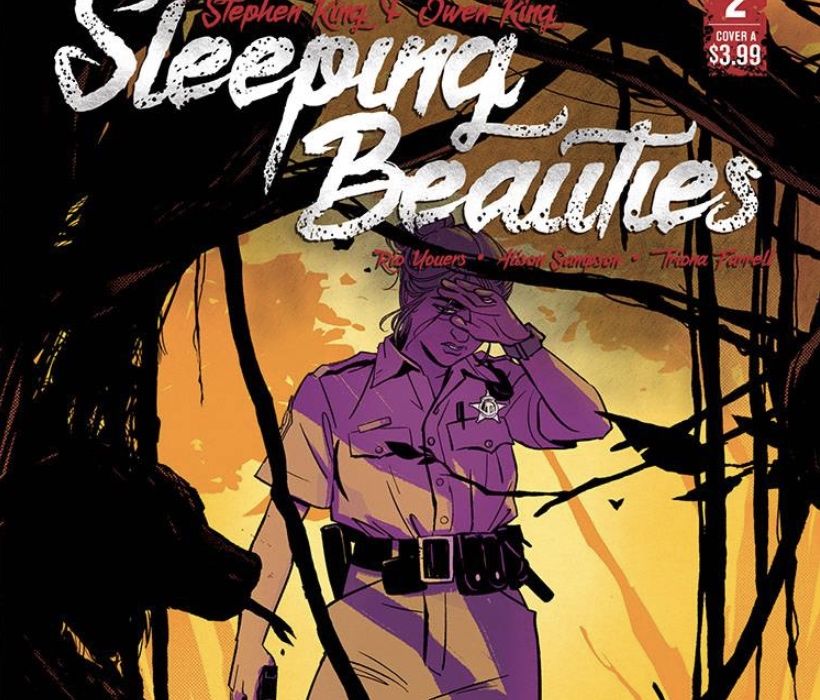 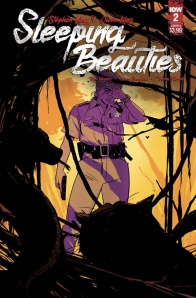 Cover by Annie Wu
Created by Stephen King & Owen King
Written by Rio Youers
Illustrated by Alison Sampson
Colored by Triona Tree Farrell
Lettered by Christa Miesner A strange sleeping sickness, known as Aurora, has fallen over the world, and strangest of all, it only affects women. In the small town of Dooling, a mysterious woman has walked out of the woods; she calls herself Eve and leaves a trail of carnage behind her. More mysterious: she’s the only woman not falling asleep.

Literary adaptations are hard, and King’s style makes them even more difficult. What trips up the team in “Sleeping Beauties,” however, is Sampson’s style. Frankly, it’s not a good fit for a book with this much dialogue or a book with a horror premise that requires grounding in a recognizable reality. As a writer, King always functions within a ton of edifice, and that kind of complexity can sometimes require a descent into dysfunction and oddness. Sampson’s art is odd from the get-go, and while Youers has adapted the script reasonably well, the density of dialogue inhibits Sampson’s freedom to explore the page. The conceit of this story also requires a certain equilibrium that the Aurora sickness can then puncture. While the team tries to unspool the mystery through dialogue and the scenes they choose in the comic, it’s nearly impossible to accept that there’s anything normal about “Sleeping Beauties” because Sampson’s style is so expressive and strange. Issue #2 continues this trend, and what’s served other books extremely well becomes jarring, or in some cases visually irritating, in this comic.

Sampson’s art in “Sleeping Beauties” relies pretty heavily on close-ups and skewed anatomy to communicate weirdness. There are some moments where this works, like the composite panel showing the doctor’s face from his childhood – narrated to him by Evie – and his expression now. This is a fine example of how graphic storytelling can play with time in an artful, simple way. The whole page is a good balance between the book’s curious aesthetic – small panels, insets, close-ups – and the narrative’s need for moments of pause. Bodies, faces and angles are mostly familiar, and Sampson eschews the curiously thick, jarring marker line favored in other scenes. Farrell’s work shines here with faded yellows and browns to contrast the pops of purple and blue in the present moment, and Sampson ends the page with a crystal clear panel of Evie’s bemused expression.

There are also moments where this aesthetic balance tips too far in the direction of a meaningless jumble. An earlier page features a man waking up his mother, with some brutal consequences, but those consequences are hard to grasp because the anatomy of the struggle is so unrealistic. The bottle completely obscures the mother’s hand to the point of visual nonsense, and there’s not enough contrast in the color palette on that page to add tension or truly highlight the absurdity. Left with what’s otherwise a good mix of cool tones on the page, Sampson’s jerky physiques and fine detail fall apart under scrutiny, and the moment feels silly instead of dramatic or upsetting. The final strip features a large panel that’s completely unclear – heads and body angles make no sense, and the broken glass appears to shower down from the right corner as if from space. The chaos here is meant to be artsy and intentional, but it’s unearned. We’re unmoored in a bad way, and have too much to parse to re-root ourselves before the complex story clips on.

Farrell does a lot with a lot in this book and, as mentioned previously, sometimes it works and sometimes it doesn’t. Still, most of the flavor and mood in this comic come from what Farrell does on the page, and how colors seem to emanate from characters in response to their emotional states. The prison guard scene’s birds-eye-view panel is precious but successful in its final form because of the waves of red and orange Farrell uses to punctuate the drama and terror of the moment. The strange scene in the woods features a whirl of cool tones that works to accent Sampson’s creativity.

Miesner’s lettering is a puzzle in this one, frankly. Miesner’s a competent letterer whose work on other books is clear, stylish and smooth. This project features a font that’s hard to read in black balloons with squiggly tails that, at first blush, suit the strange aesthetic. However, readability becomes an issue when the balloon tails blend with Sampson’s bolder line, and this happens multiple times. Attribution is key, especially in a book with this much dialogue, and it becomes a mild irritant on top of other aesthetic issues. Lettering a book chock full of intricate detail and unmoored visuals is a major challenge, and there’s visible effort on the page in terms of placement and some stylish sound effects. However, the book as a whole is a struggle to read.

“Sleeping Beauties” has moments of cohesion and flair, but the book stumbles over its own effort. What to do when the aesthetic of a book doesn’t serve its narrative? There’s no blame to be laid at the feet of an artist or colorist who’re trying to work within the bounds of a project. There’s no “blame” to be laid anywhere, truly. It’s a comic. The only thing to say is that the larger team, editor and publisher could’ve made their work more cohesive and successful by choosing an aesthetic and visual storytelling style that would’ve helped readers dive in.