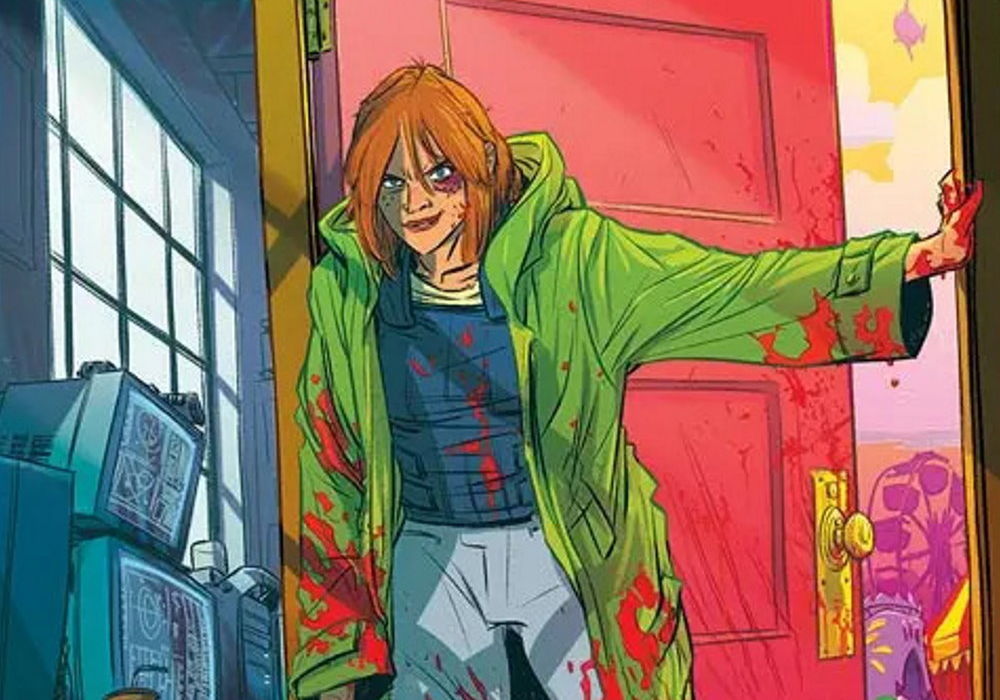 Like magic, comics seem to be an ideal medium for presenting dreams. Dreams are a place with limitless potential, canvasses where the laws of physics cease to exist, giving the artist the ability to make whatever they can imagine reality. But with dreams also come nightmares. Whimsical spaces that can instantly become a terror. If you could fight against nightmares, you could be a hero. But being a hero means you might stir up some enemies as well. In “Slumber” #1, Tyler Burton Smith and Vanessa Cardinali take full advantage of the medium, creating a surreal mystery that leaves you guessing and keeps you wanting more. 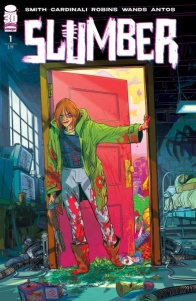 Stetson is a nightmare hunter. A dream detective. She runs a shoddy back-alley business where she helps clients sleep at night by entering their dreams and killing their nightmares. But Stetson’s past comes back to haunt her when she tracks down a literal living nightmare—a serial killer that murders people in their sleep.

There’s a lot going on in “Slumber” #1. There are a series of killings, a crew of “sleep therapists” who guarantee they can make your nightmares disappear, and a larger world about dreams. Honestly, the issue is rather busy but does an excellent job introducing everything in dynamic and exciting ways. Stetson’s introduction is the best example of this. After a few pages following a client through his nightmares, our protagonist’s introduction is quick, blunt, and brutal. Although the whole sequence is chaotic and surreal, actively taking advantage of the random logic and physics of the dream world, when Stetson arrives, it completely changes the temperature of the comic. Tyler Burton Smith instantly imbues Stetson with a manic personality, highlighted by an equal amount of snark and too-tired energy. While her methods might be extreme and unconventional, she gets results even if it means breaking a few rules.

There’s not a whole lot of explanation of the ins and outs of the rules of nightmare hunting in “Slumber” #1, but again the comic does a remarkable job of showing and not telling about Stetson and her team. Through the first case specifically, we learn a little about the technology used (a door that can be used to enter dreams,) a little about the impact of messing with people’s minds in the dream space (memory loss, mainly,) and that there are rules to this job. Again, Smith does a remarkable job giving you just enough to keep you onboard while also keeping you intrigued about learning more. Every time there’s a sequence in the dream space, everything looks and feels a little different, from the scenarios to the physics of the job. It also helps show just why Stetson acts the way she does. It’s a job that seems stressful and overwhelming, a job that you have to stay on your toes. Much like other media that explores dreams, “Slumber” has the subconscious fight back against the interloping Stetson and her partner. It’s all pretty intense stuff, and Vanessa Cardinali excels at presenting some genuinely terrifying images of the client’s nightmares, but it’s all tempered by a witty and well-written script.

There’s a certain degree of comfort to Stetson and her team. While she’s a little rough around the edges and has a loose cannon attitude, she’s a fun character to follow through the series. This is especially true with her relationship with Jiang, her flesh-eating partner. Jiang is another great example of the series using shorthand to build out the world and establish mystery. We don’t know much about Jiang, but it seems likely they’re a dream creature living in our world. How? Well, “Slumber” #1 doesn’t give us answers, but it’s a reason to keep coming back, and due to Jiang and Stetson’s playful banter, it’s a relationship about which you want to learn more. As the issue progresses, it starts to become clear that Stetson’s loose cannon attitude is more the result of a previous interaction with Valkira, a mysterious menace in the dream space, but that continues to build Stetson into a fascinating protagonist. We see her continued struggle to separate dreams and reality during the issue, a problem she seems to be accelerating by refusing to fall asleep. Again, in the premier issue, Smith does a remarkable job of giving us just enough information about Stetson that you want to learn more. She has a reason to keep diving into dreams, which perfectly compliments the larger mystery at play.
Continued below

On top of being a trippy and surreal adventure through the nightmares of innocent civilians, “Slumber” #1 also creates an intriguing mystery as Valkira seems to be penetrating the veil between dream and reality and taking her revenge out on Stetson. Again, these sequences have a remarkable degree of tension, as the Detective tasked to learn more about the “sleepwalker killings” becomes part of the mystery. While Detective Finch’s story bookends Stetson’s adventure, it provides an excellent example of what makes the first issue of “Slumber” stand out, how the art team captures dreams.

Vanessa Cardinali does an amazing job creating surreal dreamscapes for Stetson and her team to explore. In general, her art is wonderfully exaggerated, with character designs falling somewhere between Jeff Lemire and Erica Henderson, but this helps make the dreamworld feel unique. Cardinali’s designs in the dream are wonderful, equally whimsical, and terrifying, with characters going from adorable to nightmarish at the drop of a hat. However, the thing that makes the nightmares pop is Simon Robin’s use of colors through “Slumber” #1. Anything in the “real world” has a dull grey or sepia tone hue. Of course, there are the occasional pops of color, but the waking world is incredibly bland for the most part. Dreams, however, are flamboyant and vivid, filled to the brim with bright light. They almost make the dreams inviting, places you would want to stay before the nightmares take over. Yet, while the waking world tends to be monotonous, the colors begin to pop when Valkira takes over one of her victims. Even the words she says are filled with fantastic color, giving Steve Wands a chance to play with the letters, making her words as disheveled and chaotic as she is. In general, the premier issue of “Slumber” shows all creative team members working in harmony, creating a comic that is both funny and tense, whimsical and nightmarish. Comics are a wonderful medium to express dreams, and this comic proves it.

Overall, “Slumber” #1 is an excellent premier issue, giving you just enough information to invest in the story but keeping you asking questions. A lot is going on, but at no point do you feel lost or overwhelmed, even when the comic starts blurring the line between reality and dream. The creative team has created a book that threads the needle of creating a mystery you want to return to, and what a dream that can be!

Final Verdict: 8.5 “Slumber” #1 takes full advantage of the medium to create an exciting and surreal adventure where you don’t want to wake up.