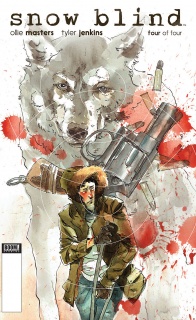 Final issue! Teddy and his family aren’t safe at the cabin when Trent escapes police custody.

Pace might be the most important, and difficult, story element for any mini-series to get right. Given the warring speeds of “Snow Blind”s duelling genres, the slow, atmospheric floe of Alaskan Noir and the racing speed of a Thriller, Masters and Jenkins’ fourth issue manages, for the most part, to land on that elusive sweet spot.

With Teddy and his family holed up at their cabin, and Trent on the offensive, this issue starts off strong, with the icy sense of mistrust and foreboding that has permeated the previous issues is in full effect here too. While the cops offer up some measure of protection, it ultimately falls to Teddy and Billy to stand up against their family. But Teddy’s suspicions continue to flare in the face of his father’s seemingly endless shifts in personality, and his familial loyalty is pushed to breaking point.

As previously mentioned, Masters has managed to skate between a few closely knit genres throughout this series. He’s employed a variety of familiar techniques, most notably and often a terse, overarching narration, but the key to this book’s success lies in his ability to abstain from the more melodramatic end of the scripting spectrum in favour of more naturalistic narrative and action. As a result, though the violence in this series is relatively sparse, it packs a decidedly real punch.

In terms of visual aesthetic, Jenkins maintains the stark, wintery visuals that made this book’s first issue so eye-catching. Issue four provides a backdrop of crisp white snow and dark, shadowy masses of conifers for a final Mexican stand-off that blossoms with scarlet, violet, and orange. Jenkins’ watercolours perfectly represent the natural setting of the showdown, and as the pressure begins to build on Teddy Jenkins starts dropping out any extraneous imagery in the panels, forcing the reader to focus on Teddy’s indecision, set against the chilly whiteness of the snow.

As with any short story, there’s a lot that is left murky with regards to the story at large, including Teddy’s father’s past, his connection to State Marshall Stone, and even, to a large extent, the ins and outs of the exact series of events that landed Teddy and his family in Alaska. The isolated, introspective way this series has unwound means that there’s quite a lot still to resolve in this final issue, but Masters manages to mitigate any real sense of confusing by ensuring that we’re always aware what the focal point of the series is; Teddy and his burgeoning sense of self. As the story draws to a close there are elements to the story that definitely could have benefited from more inspection, one of which being Teddy’s mother’s link to the crimes that landed their family in witness protection. She’s seemed largely secondary to the narrative throughout this series and, other than a throwaway line about her involvement, she still feels a lot like a bystander even as this story reaches its most dramatic point.

But, overall, this is an enjoyable pulp romp that feels dutifully aware of its heritage without getting too tangled in the tropes of genre. Masters and Jenkins are clearly both strong storytellers and the wild, wilful vibe of this book pulls it along and makes for quite compulsive reading. What’s more, the intricate and taciturn storytelling style means that this is definitely a story that reads better in one sitting than it does waiting for it monthly, and the final confrontation felt loaded with much more anticipation re-reading these issues in a single sitting. This is an understated story, both in narrative and artwork, that evokes the isolating chill both of the bleak north and of secrets left unspoken, and fans of confident, stylised Noir should find plenty to enjoy here.

Final Verdict: 7.1 – Bleak but beautiful, Jenkins’ art and Masters’ script work together to create an eerie sort of harmony.