This dark and twisted tale of the very real consequences of vigilante justice amongst the Mexican cartels grips from the first gruesome page. 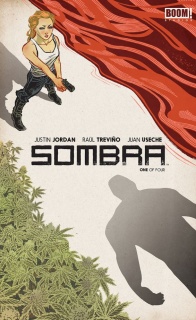 Justin Jordan (John Flood, Spread) tackles a provocative topic — the violent drug cartels of Mexico — partnering with artist Raúl Treviño, who lives in Mexico and is drawing on his first-hand experiences to inform the story. A DEA agent, who disappeared in Mexico years ago, has resurfaced and is now out-brutalizing some of the cartels he was sent to investigate. His daughter has been tasked with stopping him… by any means necessary. Perfect for fans of Scalped, the novels Heart of Darkness and Savages, or the film Apocalypse Now.

Hard boiled crime can often be a difficult genre to explore in comic book format. While there’s a litany of classic gum-shoes from the Golden era of comics, most of them have more in common with pulpy Noir heroes like Sam Spade than with anything we’d recognise as due process today. Modern policing is a lot more paperwork,  pencil pushing, and bueareaucracy. That kind of nuance doesn’t always translate well into a format now best known for punches and explosions, but in Jordan’s hands the melange of Mexican cartels and double crossing DEAs smolders with a sinister intensity.

Jordan’s premise is an interesting one. Sick of the difficulites of policing the Mexican drug trade, Conrad Marlowe, a high ranking DEA agent, goes rogue, deciding to battle the lawless cartels on their own terms. Our protagonist, Danielle, herself a stellar agent and Conrad’s daughter, is determined to track down and confront her father, who’s increasingly violent and visceral tactics have the rest of the DEA convinced he’s a lost cause. The strength of Jordan’s script lies in his ability to keep the morality every bit as murky as you’d hope in a story this complicated.

Danielle is driven and determined to track down her father, but she’s pretty much a closed book whenever any of the ancillary characters in this issue try and work out exactly what she plans to do if and when she finds him. Jordan manages to balance the severity of an agent with the desperation of a daughter, and that dynamic feels rich enough to sustain this limited run for its four issues.

Unlike Sam Mendes’ recent colourful outing in Mexico for the opening scene of Spectre, Trevino’s art feels suitably muted for a story rooted in the real world. Solicits for this book played heavily on Trevino’s native instincts influencing the tone of this book, and it’s definitely all on show on this first issue. Trevino’s character designs are distinctive, although some of his faces feel a little too cartoonishly contorted at times. They’re at their best when theyre holding pensive stares or emoting subtly during loaded conversations.

And speaking of conversation, there is quite a lot of it in this first issue. “Sombra” is definitely a slow burning book, with meticulous detective work taking the place of Bad Boys style shootouts and high octane chases. But the book uses this contrast well, building character and motivation in its quieter moments and punctuating these with visceral violence that feels all the more real because it’s so sparsely inserted.

Trevino translates sone truly gruesome pictures of death and dismemberment in such a dispassionate way that they really make you flinch. For any fans of slow burning thrillers there’s definitely a story to be enjoyed here. Given the setting and the female protagonist, this book immediately reminded me of recent sleeper hit Sicario. That film initially underperformed because people weren’t entirely sure what they were supposed to view it as. Billed as some kind of action flick, it played out in reality as much more of a subtle political thriller. That same internal conceit seems to run through the core of the first issue of “Sombra”, and I really hope it manages to keep up the ambiguity and tension as it unfolds instead of moving towards a more traditionally troden path.

Final Verdict: 6.9  – Cool and confident, with a clever conceit at the core. A comic for readers not looking for any easy answers.