With a provocative, and often disturbing first issue, “Something is Killing the Children” #1 is a very strong debut, answering just enough questions to keep its audience asking for more. 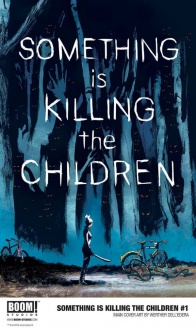 GLAAD Award-winning writer James Tynion IV (Memetic, Batman: Detective Comics) teams with artist Werther Dell’Edera (Briggs Land) for an all-new limited series about staring into the abyss to find your worst fears staring back. When the children of Archer’s Peak begin to go missing, everything seems hopeless. Most children never return, but the ones that do have terrible stories—impossible stories of terrifying creatures that live in the shadows. Their only hope of finding and eliminating the threat is the arrival of a mysterious stranger, one who believes the children and claims to see what they can see. Her name is Erica Slaughter. She kills monsters. That is all she does, and she bears the cost because it MUST be done.

Some of the best horror stories, in and out of comic form, rely on strong visuals, atmosphere, and characters you care and root for. However, there is another component that is often missed by even the best writers: the knowledge that what is not shown is as important as what is in display. Fans of “Justice League Dark” should have no trepidation, then, when realising that writer James Tynion IV is reinforcing his skills as a true horror master. Tinyon is surely comfortable on the pace of the story he wants to tell, and just how much he wants to reveal or keep hidden.

Before going deeper into plot and script, special attention is needed to the very specific, unique even, art style by Dell’Edera. At first look, readers will recognise the European influences: the thin linework, the deliberate open space on every panel. But then… the artist throws in a decidedly anime-inspired design to creature and lead characters. The deformed monstrosities seem straight out of a Japanese folklore handbook, some of the main characters have wide-eyes, and even some constructs look to be directly from the aesthetics of classic manga.

Colors by Puerto are just as impressive, especially on the duality of apparent peacefulness, versus the underlying terror. When displaying the small town environments, schoolyards, and the more bucolic moments, Puerto relies largely on pastels, soft tones that create a sense of warmth and welcoming. As an opposite force, the horrific moments are painted in deep blacks, sharp reds, and dark-tinged blues. Not only that sets the moments apart and sets the mood, but it also serves to accentuate the mindset of characters on those distinct situations.

Tynion, then, revels on that contrast. The story he is weaving plays with perception, with the expectation of its audience. If it leans too much on an obvious reveal, it will likely swerve right and insist that another explanation, other than the supernatural, is at play. And when readers grow sure of that… the writer hits them with big exposition on the true nature of the threat at hand. An additional element to this is how unreliable the series’s narrator and lead character really is. It is established fairly early on the issue that this can be an often lying little boy, so framing some sequences from his point of view and recollection of past events adds further layers and questions to the narrative.

While still early to make a determination on what is actually going on, “Something is Killing the Children” does expand fairly quickly on its roster and on the relationships these characters are building. It is not the usual first issue on that regard, especially for comics of the last decade or so, as it pushes the narrative forward unafraid of running thin in subsequent entries. That juggling act, of revealing several elements, but still keeping their nature a secret hidden behind double meaning, is a joy to experience.

All in all, “Something is Killing the Children” hits several high notes. It quickly introduces and establishes compelling characters, flaws and all, who will serve as framing devices for an unreliable narrative. It showcases an immediate threat, a dangerous one at that, of which the readers and their viewpoints inside the story have little knowledge or ability on how to deal with. It wraps those notions on dual art styles, one bright, one dark, that accentuates the notion of fear and uncertainty. And all of that in little more than 25 pages. The combination of a strong script, and a visual representation of that duality becomes one of the strongest horror launches of the year.

Final Verdict: 8.9 – “Something is Killing the Children” is a perfect blend of horror script and visual storytelling, with a fluid and mixed art style being as filled with double meaning and secrets as the story it is telling.