A new arc begins and new revelations come to light in the latest issue of the spectacular monster hunting series. Mild Spoilers Ahead 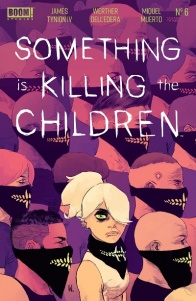 “Something is Killing the Children” #6 begins a new story arc for the action/horror series. It takes its time giving us a look at the present day aftermath of the discovery and battle in the cave, as well as a look back at the night James’s friends were killed by the beast. As he heals from being shot in the last issue, Erica is doing her best to keep the situation under control, and at the same time we begin to get a little bit of the mystery surrounding her revealed. The House of Slaughter: Part One begins here.

The issue opens up on the night that James and his friends snuck out while playing Truth or Dare during a sleepover. Because we know what transpires on this night, it’s a great, foreboding start to this chapter. We have gotten a lot of action and a lot of terror at this point, but we have not gotten many answers. So while this is a re-tread of something that has happened, we are getting more detail and a much more detailed look at that night and, possibly more importantly a look into James’s head and personality. We learned that James is homosexual and had a crush on one of his friends, but we are now understanding that his closest friends knew this about him. He was open with them and they were accepting of who he is; even asking them for dating advice, which is a great and detail.

This revelation of just how close this group of boys actually were makes their deaths, and the fact that James is blamed, and by some, accused of their deaths all the more tragic and terrible. The dialogue in this opening sequence is fairly believable too. It never really feels overly dramatic or forced, but rather pretty natural for a group kids this age. They joke, talk over each other, and reassure one another as they make their way through the dark woods to fulfill the last dare in their game. It’s fun and heartwarming chatter, a small light in the dark night, and horrifying events that are about to happen.

The artwork for this sequence is beautiful, and downright spooky. The team of Dell’edera and Muerto has been spectacular throughout this series, but it is sublte moments like this where their talent shines. Rather than trying to focus on something other-worldly or out and out spectacular, it is the quieter moments with the right sense of design that ends up being the greatest parts of these issues. The first panel of the boys standing in front of floor to ceiling windows as they make their way outside, reminded me of the final scenes of David Fincher’s Fight Club and Bong Joon-Ho’s Parasite, among other dark thrillers/satires. While mostly unrelated to that genre, it is an aesthetic that always works.

Speaking of design aesthetic, this team makes great use of double page spreads. Allowing the panels to flow and move as necessary to tell the story, rather than being bound to the usual panel size and spacing relegated to single pages, or just doing a large splash piece across two pages. It is done to great effect more than once throughout the issue and it truly makes for a different reading experience. It feels a bit more cinematic, and immersive all at once. I hope choices like this are made for most of the issues moving forward. Keeping things fresh without totally moving away from a uniform style is one of the best things this series does.

As the issue moves forward, we see that the events of that night being replayed in James’s head, so while it seems that that is how the events played out, we can’t truly be sure that there isn’t a dreamscape spin being placed on it. Only time will tell for that. Erica checks in on James and then runs into Tommy. Tommy, being the headstrong young man that he is, believes that just because he knows about the monster and wants to avenge his sister’s death, that he can join Erica in her crusade. She quickly uses her words and her fists to dissuade him of these delusions.

As the local law enforcement tries to figure out how to handle informing the families of the dead children of what has happened and keeping the press out this, it is clear that even the officers we have been following up to this point aren’t exactly all cooperating with each other when it comes to these details. It is just a few quick moments, but it is clear that these discussions are setting up future confrontations.

The issue more or less ends with Erica sitting down with Bian at the police station, coloring, and matter-of-factly discussing the events in the cave, and exactly what Erica will have to face. This conversation is wonderfully mapped out and with the exposition coming from the mouth of a young, yet intelligent child. It is done so well, the quiet calm before the storm. We get just a glimpse into who Erica is deep down, and who she would have been if she wasn’t destined to hunt monsters. And with the end of this conversation we get some brief answers as to where Erica comes from, and yet some more hints at coming problems headed towards our heroine.

This is a chapter of conversations. Quiet conversations in the dark, in the privacy of a closed room, and it raises just as many questions as answers. It is a perfect way to move from one arc to the next, allowing readers to catch their breath, but still give us plenty of terror and unsettling moments. Tynion’s script really resonates from start to finish and paired with this fantastic art team, this sixth issue shines just as brightly, in new and exciting ways, as the previous five.

Final Verdict: 8.5, Quiet moments of reflection and revelation in the dark set this series apart from most other horror books.