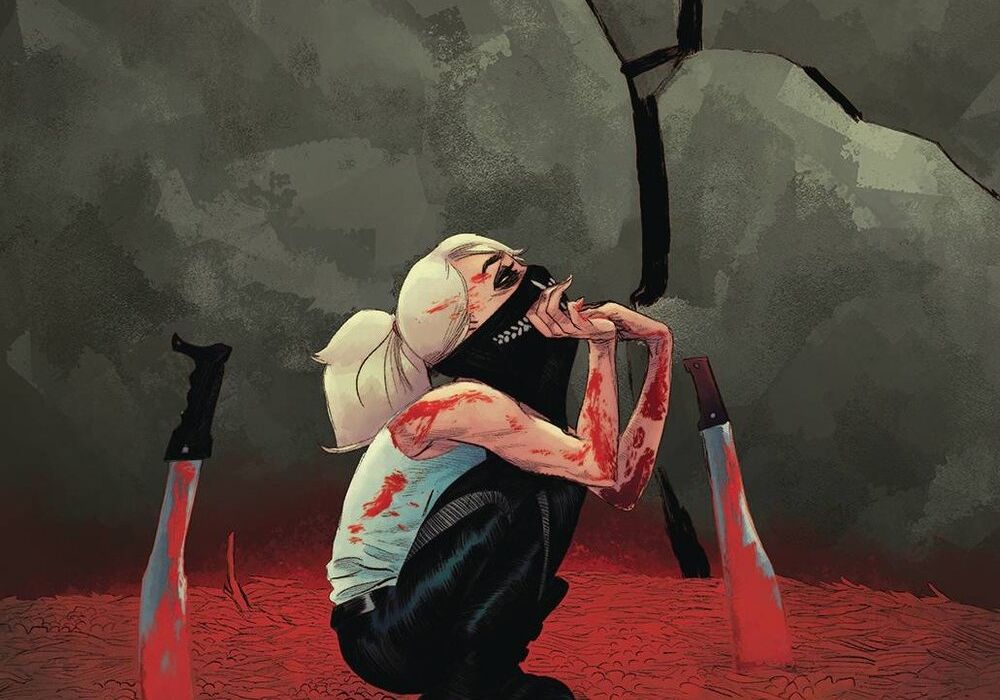 What should have been just another mission for Erica Slaughter has steadily gotten out of hand. In ‘The House of Slaughter’ Part 3, myriad new factors arise, which means things are about to get a lot more complicated. Mild Spoilers Ahead 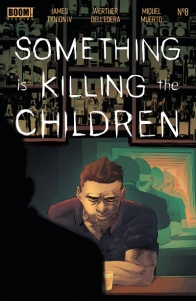 Erica has killed the monster terrorizing Archer’s Peak. This is the point where she should be packing her bags and either heading home or to her next assignment, but the horrors have yet to cease. The monster had begun giving birth, and the caves where it was hiding are now filled with its spawn. At this point more of our periphery characters are being brought into the fold, the town, believing it is time to heal, begins its journey back to normalcy, and Erica’s handler decides to make things even worse for everyone. This is a chapter of conversations, each important, moving towards their ultimate goal, but each ending unresolved.

This issue is the ‘So, what happens next?’ chapter of the story. The monster is dead, a few of the characters, and we, as the omnipresent reader, know the terror isn’t over. The majority of the town believes a serial killer is responsible for the deaths, because of course why would anyone believe in monsters. And a few of the characters have seen too much to know the problem is something supernatural or at least inexplicable up until now. As everyone is coming to grips with what has occurred, tensions begin to rise again.

Tynion uses this issue to discuss the morality of these characters, specifically Erica and her handler Aaron. While Erica was typically willing to do whatever she needed to to take down a monster, this is the first time where so many innocent bystanders have continuously been in her path. And Aaron is so wrapped up in his duty and allegiance to the Order of St. George that he is literally willing to do anything to succeed in his mission, and that means harming anyone in his way, child endangerment, and using Erica in any way he sees fit to achieve his goal. He is a perfect example of someone so dead set on killing monsters that he has become a monster, devoid of any compassion or empathy.

The use of Aaron as just another problem in this already messy situation is fairly typical in stories like this, but he is a necessary evil. Having him show up in Archer’s Peak to come face to face with Erica and those she is trying to save has him serving as a mirror for Erica. How far is she willing to go? Is she as far gone as he is? It is these questions that are the only part of resolution in this chapter.

The issue opens with the Sheriff visiting James in the hospital and their conversation is a beautifully quite scene. These two characters say so much to each other without saying much at all. The Sheriff opens up about what he thinks is going on, while trying to get answers from James without pressuring him for answers. The writing of the scene is great and subtle, but it is is the layout that really makes the whole opening act work so well. We all know comics are a visual medium, and for the storytelling to work, the art and the writing must work together in a symbiotic relationship. Otherwise you just have text over some pretty pictures, and it never comes together.

This hospital scene is the perfect example of how to make this relationship work. As these two characters connect and begin to discuss what has happened, Dell’edera changes the scene from a single page with 7 panels to two double spread pages 32 panels. This layout is implemented a few more times throughout the issue, and while a technique like this could easily come off as a gimmick, it is flawlessly executed here as a storytelling tool. Something like this is so rarely done in comics, especially in current books. But there is a reason for it. As the sheriff and James come to understand each other a bit more, and they begin to realize that maybe things really aren’t over, the number of panels change. Cutting back and forth between the two gives the pacing a feeling of camera cuts between actors, and allows your subconscious to take over, feeling the tension rise before you fully notice it. There is a lot of pain, fear, and confusion in these opening pages. More-so for the characters than for us, but it allows that creeping sense of dread to set in as we turn each page.

The issue as a whole has an interesting sense of time and pacing. The issue itself is an incredibly fast read. It was over before I realized I had reached the end. It jumps from moment to moment without stopping for air, but surprisingly, with each scene, time seems to slow down. We are fully immersed in each conversation because they consist of only 2-3 people at a time and give off a real sense of importance. The dialogue isn’t heavy so each word feels that much more important. Our feelings for these characters are also in a constant state of turmoil. So as we try to decide who to side with, or who is doing the right/wrong thing, that internal struggle pulls us in like wind tunnel. There is not a single moment of disengagement in this book.

This series has really leaned into its episodic nature and issue #8 is one of the strongest cases for that. This feels like an episode of a dramatic horror t.v. series from start to finish. Tynion’s script is simple, to the point, and doesn’t cater to new readers. You’ve either been here from the start or you are lost. Dell’edera uses his art and the layout to imitate something that at times feels like camera edits and living, breathing moments that we feel a part of. Muerto’s inks and colors have been an absolute highlight in every issue, and this one is no different. His use of light and color really captures the settings for each conversation, allowing us to sit in these scenes and feel like something true to life, even with Dell’edera’s stylistic take on the world. By the time we pivot back to the horrific supernatural side of things, the art feels like it is dragging us back into a nightmare after a, if not reprieve, then at least a sense of normalcy. This creative team is one of the best working right now, on one of the best horror books hitting shelves.

It may feel, at first glance, like very little happens in this issue. That may be true in the sense that there are really only three scenes with a handful of characters, and just a few plot points are discussed, but that’s only if you look at it with no emotional connection and sit down to count things out. If you engage with this issue like you should, you will know that content is so much more than what you see at face value. This is a perfect example of how to pivot a story into a new direction, while taking a moment to breathe. If you are a fan of horror and comics, but haven’t started “Something Is Killing The Children,” you are doing yourself and this team a disservice.

Final Verdict: 8.5, A series of conversations, revelations, and re-evaluations are the central focus of issue #8, another stellar entry in this outstanding horror series.