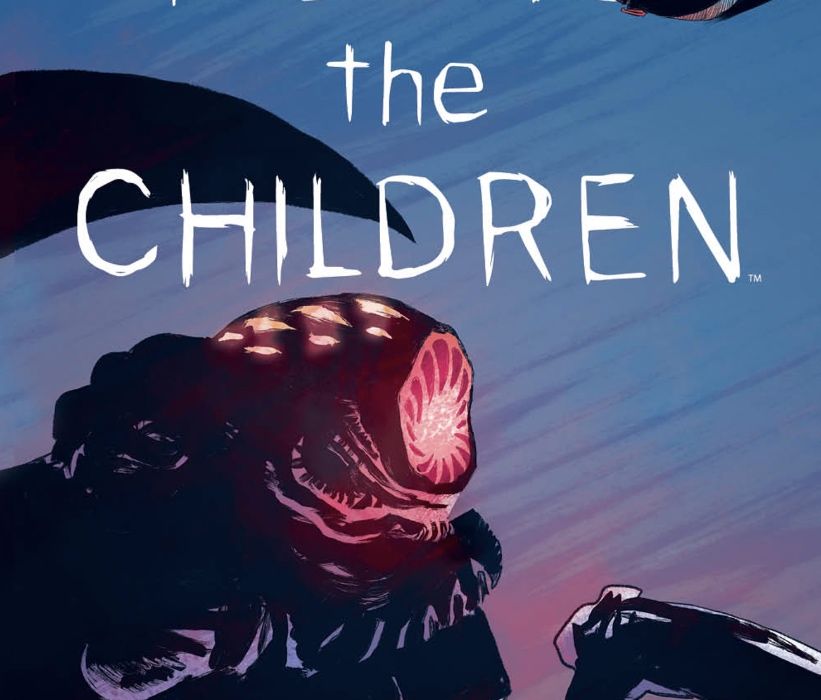 “Something is Killing the Children” #5 features Erica in action, a few misunderstandings, some serious violence and a bigger framework at play. Warning: spoilers ahead. 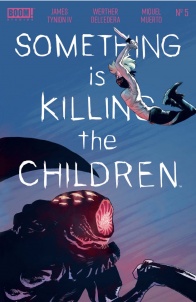 Cover by Werther Dell-edera
Written by James Tynion IV
Illustrated by Werther Dell’edera
Colored by Miquel Muerto
Lettered by Andworld Design The time for investigation is over. The hunt begins, as Erica Slaughter brings her namesake to the monsters of Archer’s Peak.

“Something is Killing the Children” succeeds so far because of two main factors: Erica, and the aesthetic. Tynion crafts dialogue for Erica that hints at deeper emotions, frailties and authenticity than the typical badass, mysterious female character. She’s a trope, yes, but she’s got some depth and some sympathy that needs to be here in order to follow her story at such a measured pace. Dell’edera and Muerto put together a fine visual feast that’s distinct from its peers, and Dell’edera’s style makes this book feel a bit off-kilter and out of the norm. Going for realism would do the grave tone a disservice, and going too cartoonish would limit how sinister the book can get – and as evidenced in issue #5, the team isn’t afraid to be ghoulish to get their point across.

“Something is Killing the Children” #5 is an action oriented issue that’s well-timed after four issues of careful exposition and mystery. Tynion and Dell’edera pace this series with care, and this high action beat hits when we need it to. There’s a bit of bumbling around in the cave that doesn’t entirely work out, however, and a few bumps in the road before we hit the good plot-building in the latter half. Setting an issue in a confined space and balancing action between four characters (including several shocking moments and reveals) is a difficult sell. Tynion and Dell’edera pull it off, but there’s a sense of knocking against the figurative and literal walls for a few pages before everything smooths out. The monster’s off-panel for a few moments which feels off given its size and level of menace stated by Erica and its physical action in this issue. Still, some high stakes are established, and the story ticks on.

Dell’edera’s creature and character designs are both stylish and endearing. As angular and spindly as some of the characters get, there’s a softness in each face and some of the details that balances the intentional alienation and coldness. Erica’s eyes and lithe figure dominate our perception, but there’s also the cheerful bobble of her ponytail. James’s glasses obscure his emotions and help him hide from his trauma, but the way his hair flutters around his face and the dwarfing angles Dell’edera uses in his panels communicate his helplessness and make his tenacity more endearing. Tommy’s face is largely twisted in rage, fear and pain in the cave, but he carries softness in his gestures of confusion and bewilderment. What reads as careful tenderness in quieter moments becomes calculated hazard in issue #5, and as we see there’s a price to be paid for rash violence all around. Dell’edera creates a brittle aesthetic that hides a beating heart, and that duality ups the mood and stakes for our protagonists.

As for the monster, it’s a swath of splashy brushstrokes and amorphous limbs, and Muerto’s colors render it in nightmarish detail – or lack thereof. Dell’edera’s line and Muerto’s work make the monster feel as if it’s bled into our reality and now occupies some horrific in-between. Muerto also does excellent work on Erica’s eyes overall, but in this issue they glow in the darkness and provide a focal point whenever she’s on the page. The initial green wash as we enter the cave communicates the alien tension up to this point, but the switch to blue makes everything just a bit too homogenous in the later spread. Dell’edera favors spreads with numerous narrow panels to help slow down the action and fit as much into a page as possible, and some of the blood and close-up faces blur together because there’s not enough contrast at play. Still, Muerto picks a red that glows and often lines it in scratchy purple for a welcome surreal effect, and there are tons of these small contrast details at play in this book to build an interesting and unique visual experience.

As for lettering, the backgrounds don’t support a lot of white space in this issue and Tynion cuts some of the chatter appropriately. Andworld Design’s an excellent studio, and the work on “Something is Killing the Children” has not disappointed. Economical balloons boast a drawn stroke that helps situate them against the cave backdrop, and the font has a few pen details that make it feel almost hand-drawn. There’s a hint of an uneven join on the Os and and a bit of peakiness on the Ds that give it character and help sell the overall mood. A few drawn sound effects are nicely augmented by some monster sounds, done in complementary colors in their respective panels.

Overall, “Something is Killing the Children” #5 bumbles about a bit but gets to where it needs to go. It offers a taste of the metaplot and some good action as a payoff for our patience thus far, and it’s as entertaining and moody as the previous installments.

Final Verdict: 7.5 – “Something is Killing the Children” #5 gives us the action break we need and builds enough intrigue to keep our attention.