DC’s ghoulishly great new title features a resurrected and reimagined Jack Kirby classic character with a decidedly modern twist: And all just in time for Halloween. 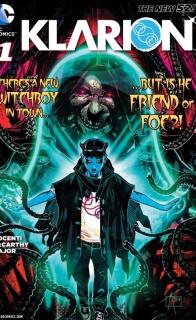 Tired of the rules of his world, Klarion takes a trip to a place where freedom reigns: Earth!

It’s not quite all Hallow’s Eve but DC have certainly seen fit to serve us up a slice of something spooky this week with their newest addition to the New 52, Klarion. Despite having been featured on and off in the DCU since his creation in the 70’s, you’d be forgiven for not having much insight into this character going in (unless you caught him in the criminally cancelled animated series Young Justice). In a nutshell, Klarion is a young Witch from an alternate version of Earth where the dark arts are widely practised but heavily policed. Eminently talented, but bored of his world’s rules, he takes a trip through the Multiverse to find somewhere he can use his powers with a little less restriction.

And that’s really all you need to know to jump right into this title. Nocenti and McCarthy have done a great job of streamlining what little ‘origin story’ Klarion might need into one, beautiful, opening page. While a lot of the New 52 openers got bogged down in exposition or clunky retconning, “Klarion” #1 is a book with its sights set firmly on the future.

Nocenti’s characterisation for her titular protagonist is superb from the get-go. We open with Klarion standing at a crossroads – both literally and figuratively – and weighing his options with all the carefree jour de vivre you’d expect from a little lord of chaos. He’s not sure where he’s going, but he’s damn sure going to enjoy the ride.

The spirit of this book is split pretty evenly between a creepy coming-of-age drama and a fairy-tale (albeit more Brother’s Grimm than Beauty and the Beast) and the tone for much of the dialogue, along with many of the characters we meet, are decidedly ‘teen’ in nature. Nocenti’s Klarion is still learning more about himself and his powers, as well as the new world he’s jumped head-first into, and her colourful cast of supporting characters seem to consist of similarly misfitted youths and inscrutable adult mentors.

But, as you might expect when your protagonist is as demi-demonic as Klarion,the conflict doesn’t come from a straightforward black/white, good/evil dichotomy in this story. Instead, the balance of power is rocked by a struggle between those figureheads who believe in the power of nature and magic vs those who believe in technology.

What really elevates this book above the masses of #1’s produced by the Big Two is McCarthy’s stellar work on the art. Dark, detailed, and thoroughly deranged, almost every page is a mind-bending maze to decipher, filled with tidbits that you’ll only notice the second time around. McCarthy’s current work on “Batwoman” is similarly impressive, and one of the main reasons I picked this title up. He doesn’t disappoint, carrying the crisp line-work and crazed panelling that hooked me in on his previous work.

A story that centres this heavily around magic and the multiverse definitely needs a playful artist to bring something new to the table and McCarthy does just that. He favours large, expressive panels that allow for his physically expressive style to flourish, and even his borders are littered with visual nods to the setting and characters. He excels particularly during moments of action, where you see him move further from linear boxed storytelling and more towards a fluid style that better represents the chaotic nature of Klarion’s abilities.

In terms of villainy (or more accurately, antagonists, since our little Klarion is hardly a saint himself) there have been some early nods made to what will clearly be the big bad for the initial arc. As with any teen runaway story, one of the main pitfalls is falling in with the wrong crowd, and Coal, Nocenti’s twist on the modern-day Fagan – equal parts Catfisher and cult leader – makes this possibility seem tangibly terrifying. Her villainous scripting treads the fine line between plotting and monologuing, but her choice to keep the motives’ of the adults on both sides of the divide shrouded in mystery makes me confident that there’s a good yarn here to be spun out for many issues to come. McCarthy does well to distinguish Coal and his followers from the rest of his cast of creatures both through character design and more subtle switches in colour washes and panel bordering.

Issue one barely scratches the surface of what this comic has to offer, but it is a very confident debut from a creative team with both history and innovation on their sides. The character of Klarion is instantly likeable, and there’s enough story within the mystery that ,even though every character has some kind of hidden, ulterior motive, you don’t feel like you’re being kept waiting to get to the good stuff. Plus, while it’s not explicitly stated in this issue, it’s been suggested that the city Klarion has found himself in is Gotham, which opens up a whole world of possibility for an extended run: Definitely something to keep an eye on.

Final verdict – 7.9. Beautiful art and black magic by the bucketload. “Klarion” demands your attention from the first page.