I am exactly the target audience for a Bill and Ted comic. I owned the Bill and Ted’s Bogus Journey soundtrack on cassette (Primus holds up, Kiss doesn’t); I can tell you the name of the water park in San Dimas (Waterloo); when drunk, I have been known to scrawl “Be Excellent to Each Other” in bathroom stalls (don’t judge me). And yet, while reading this issue, I couldn’t help feel like this was not the most excellent comic I was anticipating. Keep reading for a spoiler-free, but occasionally bogus, review. 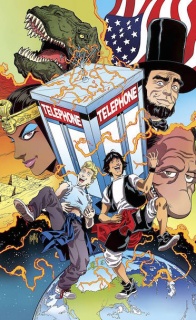 WHY WE LOVE IT: Similar to our Big Trouble in Little China comics, we’re returning readers to one of our favorite—and most excellent—cult-classic properties with a new Bill & Ted adventure of epic proportions. And because we’re fans first, we’re making sure it’s something WE would read. Wyld Stallyns forever!

WHY YOU’LL LOVE IT: If you’re a fan of the films, our comics will pick up where they left off. Main creative team Brian Lynch (Angel: After the Fall) and Jerry Gaylord (Fanboys vs. Zombies) bring you all the silly humor and likable characters mixed with some cool historical science fiction you love! Plus, each story will have a back-up adventure! This issue features a tale of tech terror by Ryan North (Adventure Time) and Ian McGinty (Bravest Warriors)!

WHAT IT’S ABOUT: Following the time-traveling historic epic of Excellent Adventure and the turbulent life and death of Bogus Journey, Bill and Ted must now fulfill their destiny as the inspiration for galactic harmony! How can someone hate the Wyld Stallyns as much as the evil Chuck De Nomolos? With the power of time travel, Bill and Ted set their sights on turning a young 27th-century Nomolos’ non-non-heinous attitude into something most outstanding and metal!

A licensed comic is always a bit of a tricky situation, as you have to appeal to both hardcore fans of the original property, as well as translate the concept into sequential art that is appropriately interesting to casual fans, who might be interested because of a creator or publisher, or who just likes the look of the cover. On this criteria, “Bill And Ted’s Most Triumphant Return” falls on its face. The first five pages are packed with so many references and characters from Bogus Journey that all but the biggest fans of that film will be using Wikipedia to figure out what the hell is going on.

Bogus Journey is by no means the piece of the franchise that most casual fans identify with, and so seeing the book take place literally five seconds after the film ends instantly draws a line in the sand: either you are 100% on board with a direct sequel, or you’re not. Most fans of a certain age can tell you about Rufus, the Princesses, and probably Napoleon, but throwing characters like Station and the Evil Robots in with no explanation is a surefire way to alienate anything but the most diehard of fans.

If you happen to fall into that category, then this book is somewhat of a dream come true. Writer Brian Lynch nails the conversational tone of the films perfectly, with Bill and Ted sounding like the smartest dumb asses in Southern California, and Rufus sounding like the learned prophet from the future. The specificity of the tone is extremely important, as that is pretty much the key to this book’s success – it is the calling card for the characters, especially as the time travel element isn’t an instant piece of the story.

The lack of crazy time travel is the biggest problem the book has – sure, people ‘care’ about the story, but they care way more about seeing Napoleon on a water slide, or Abe Lincoln saying “PARTY ON, DUDES!” The reason the first movie works so well is that it never stops moving – there’s no time to get bored, because you’re jumping from time period to time period. Sure, the main characters are fun, but they’re more fun as the tour guides through insanity than the focal point of the story.

The book eventually goes into the future, but it isn’t nearly as fun as it could be. Aside from things like a water slide entrance to the school, the future scene serves to further the overall plot of introducing the villain of the series: and, without spoiling it, it is also a character from Bogus Journey. Sigh.

Jerry Gaylord’s art brings an early 90’s film to animation feel to the book, not unlike the Beetlejuie or Police Academy cartoons. This is an interesting, and I feel wise, choice for the book, as it roots in a particular pop culture time – which also happens to be when the book is taking place. He is able to accentuate the silliness and absurdity of the script, and he manages to capture the physical likeness of Keanu Reeves and Alex Winters well enough. Who he doesn’t capture at all is Rufus, who goes from George Carlin in an oversized trench coat to a broad-shouldered Charlton Heston.

Overall, the art tries to make up for the lack of kinetic energy in the script. Gaylord’s approach is refreshingly not cinematic, but rather plays with typical comic conventions, like stacking panels and overdone facial expressions. If you were to just look at the book, visually, you’d expect the plot to be far more bombastic than the one we actually get.

The most effective part of the book, however, is the backup by Ryan North and Ian McGinty, titled “Bill and Ted and the Bogus Virus.” In it, the Bill and Ted robots get an email letting them know that their “evil uncles in Nigeria” died, and get scammed into downloading a virus. This is an ingenious example of taking the established framework, adding in a modern twist, and hilarity ensuing. In fact, I think it would be far superior to have this type of a story launch the book, where all you would need to know about the property would be that there are these guys name Bill and Ted, and they have robots. Far simpler, right?

Overall, there’s nothing egregiously bad about the book – it just feels like a lost opportunity and, sadly, one that so many licensed comics make. I am not advocating for having the first issue be a totally fresh start, but there’s no reason to expect the audience to be an encyclopedic fan to pick up the series.

Final Verdict: 6.2 – The potential for greatness is here, but it is just too bogged down to get there.