“Witchblade” co-creator Brian Haberlin comes back to the grind of monthly comics with David Hine and other collaborators for “Sonata”, a series which looks to explore the more extraordinary aspects of series like Haberline’s previously mentioned creation but with a more full-blown fantasy setting. Does this prove to be another breakout Image debut? 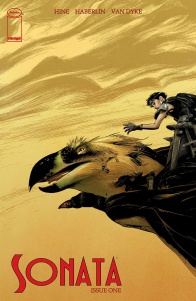 “THE FALL” In this all-new series from DAVID HINE (THE BULLETPROOF COFFIN), BRIAN HABERLIN (WITCHBLADE), and GEIRROD VAN DYKE (SPAWN, MEDIEVAL SPAWN/WITCHBLADE), two cultures clash on a planet they each believe is their Promised Land. The Rans are a peace-loving people, but the Tayans are a race of warriors who seek to colonize and control. The mysterious Sleeping Giants also call this place home, though no one knows if they’re monsters or the gods of legend. And amidst all this, a young woman named Sonata is willing to break all the rules to find her place in this world—and she’s not about to let sleeping gods lie.

Hine and Haberlin have set up a super interesting world here, with the basics conveyed with basic but inoffensive narration towards the start of the game. We have a hybrid sci-fi/fantasy type world, which seems to draw as much influence as it does from European sci-fi as it does Final Fantasy and similar JRPGs. The planet Perdita is packed with warring tribes, historical intrigue, and giant, ever-present god-like beings, not unlike the stories it takes inspiration from and seeing it explored through a comic book medium is always a lot of fun. Hine and Haberlin have a lot of fun fleshing out the unseen forces of this world to make it feel authentic. The giant god/monster Sleeping Giants are super interesting and have a clear motive and role to play in the story, but it’s the overlooked-yet-intricately-created things that I appreciate, like the solemn nobility of the Lumani, or the fact that the Rans are led by a powerful matriarchal figure. It’s high fantasy functioning at it’s best, and fans of that genre will lap this kind of thing up.

Looking deeper into the characters, our protagonist Sonata is a chirpy enough led to follow, if a little one-note and stereotypical at times. She’s a plucky explorer type who breaks the rules, doesn’t listen to her Dad, and is constantly cut down by authority. However, it’s a ton of fun watching her interact with her pet Kee, and the native Lumani like Treen, as we see her share mutual respect between every living creature or inhabitant of this comic, something which feels like a key theme considering the macro themes of classism running throughout this comic. Everyone else feels trite, unfortunately. Sonata’s father is one of the biggest culprits of this, falling into the stereotype of the father who just can’t let his only daughter out into the big, bad world. The antagonist, Kantor of the Tayans, has some Victorian-esque charm but ultimately falls pretty squarely into the racist/elitist type of villain. It helps to have a protagonist who’s likable enough to follow, but more needs to be done to make the surrounding characters pop just as much.

Brian Haberlin handles the art here as well as plot and injects as much of that Euro sci-fi/Japanese RPG influence into the designs as much as the narrative. As soon as you open this book, you’ll be hit with some lovely, striking designs like the parachute-based satellites or the intricately rendered architecture adorning the raised platforms of the Rans’ settlement. Haberlin’s signature digital drawing method may be a bit of a pet peeve for me at the best of times, but it does at least give consistent intricacy across the environmental and architectural designs that make it easy to immerse one’s self in the comic world. Beast and costume designs are also really solid here if a little gloomy and post-apocalyptic at their extremes. The most striking design is the Sleeping Giant, who works just as well narratively as it does visually. Haberlin makes sure to render it just barely visual so that we still get a sense of mystery, but the looming gigantic eye-hole and wrinkled, skeletal face is a great mixture of fantastical and terrifying. Sonata’s costume design is also effective, with enough intricacies to stand out but not too many to feel too visually cluttered. The goggles feel iconic and like a purposeful callback to steampunk and anime protagonists of old, and the red scarf is a nice touch of color to prevent the whole outfit from feeling too gloomy.

My main problem here is, unfortunately, the same problem I have with a lot of Haberlin’s art, in that the digital rendering makes it feel a little too stiff and computerized at times. Fortunately, the art is more than passable at times and often uses the digital aspect to work well sequentially. The scene of Sonata talking to her pet Kee at the beginning uses the same shot with Sonata moving around in it to great effect, in that it feels like a natural continuing conversation. Haberlin’s crisp, heavy inks also do a great job at immersing the reader and removing some of the alienating digitalized aesthetics, especially in scenes like Sonata’s discourse with her father. However, the pre-rendered backgrounds used heavily in sequence can feel a little static and cut off from the foreground, making scenes like the introduction of the Tayans look like screenshots from a video game. Similarly, when the scene moves to the Lumani village, the foliage has that blurred PS2 era graphic effect that stands out like a sore thumb and takes readers right out of the immersion. The digital rendering process may help a lot at times visually but stands out too much in key moments to feel like a complete positive.

Geirrod Van Dyke supplies colors, giving us a planet Perdita that feels like a solid mixture of natural elements and industrial colonization. We see this work well when differing between each tribe’s setting. The Rans’, being an allegedly more peaceful race, have a village that pops with vibrancy, with a few browns to show some human interference but none that feel unpleasant. The Tayans’ village is a lot more muted, reflecting this more integral example of negative human interference with the environment. There’s much more grey steel reflecting against the decidedly colder blue sky, and it does may be too great of a job at positioning them as antagonists, to the point where it’s hard to visualize the Tayans as anything else. Van Dyke’s color shading also helps a lot to get rid of the digital feeling nature of Haberlin’s art, especially in closer ups of Sonata’s face that could have easily looked unnaturally smooth and blatantly computer generated.

“Sonata” #1 is a fun fantasy series debut with a lot of worldbuilding depth to sink into. It leans a little too heavily into the trappings of the genre at times, but Haberlin, Hine and Van Dyke do a solid job a creating an intricate world filled with great little details that might not have been as achievable without the help of computer-generated imagery. As long as they can work on making the aforementioned CGI more immersive down the line, “Sonata” #1 is worth checking out.

Final Score: 7.0 – A solid fantasy debut from Image Comics, “Sonata” #1 will appeal to fans of the genre but leans too hard into its conventions at the best of times.