It’s Sonic’s 25 birthday, and he’s celebrating with a fun-filled first issue of a classically styled story that aims to appeal to nostalgia heads and new fans alike. 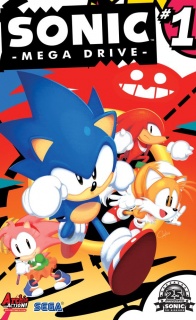 Sonic spins into a brand new, Classic-styled, SUPER SPECIAL one-shot “Mega Drive”! Join Sonic, Tails, Knuckles and Amy Rose on a brand new adventure—set after the fall of the Death Egg! The nefarious Dr. Eggman is trying to build a new engine of destruction: the MEGADRIVE, and it’s up to Sonic and his whole crew to stop the mad doctor and save the day! Join Sonic and his friends in this special commemorative issue celebrating the 25th Anniversary of the Blue Blur!

Sonic is one of my most enduring childhood memories. Growing up I played the games on my cousin’s Genesis, and “Sonic: The Comic,” the 90’s fortnightly, might actually have been my first exposure to the world of collectable comics. I doodled more versions of Sonic and the gang in the corners of my school books than I could count, and my dream was always to end up writing an epic storyline for the book. While I must admit I’ve fallen pretty far from those heady days of youth obsession (I’ve probably not read a “Sonic” comic in almost a decade by this point) I was really taken with the idea of a throwback issue that refreshes the classic Sonic vibe for a new generation.

But there was also a little trepidation as I started Flynn and Hesse’s one-shot. With so many good memories attached to Sonic and the gang, would this book live up to the legacy? Would their interpretation of the world’s fastest rodent (pending footrace with Speedy Gonzalez) butcher my childhood right before my eyes?

Well, the short answer is, they’ve kinda nailed it.

Right from Hesse’s gloriously soft-shaded cover, which could have been a discarded variant for a Sega Saturn-era Sonic title, you feel immersed in a simpler, slicker style of storytelling. Flynn lays out the premise pretty early on; Eggman is searching for a collection of ancient gears to power his latest superweapon, the mysterious ‘Mega Drive,’ and it’s up to Sonic to stop him and save the cute little inhabitants of a dozen different zones. Along the way, Sonic’s usual collaborators show up for the ride, and we’re introduced to Tails, Knuckles, and Amy, and get to see them foil a couple of the fiendish Dr. Eggman’s plans before the issue’s out.

This is definitely an All-Ages title, and younger audiences with a limited knowledge of Sonic will find heaps to enjoy in this issue. That being said, Flynn’s Sonic hold the reader’s hand or waste time with an origin story. He springs to the page fully-formed, cracking wise and crushing badniks from the very first panel. Flynn knows the tropes of the genre well and manages to tread the line between parody and homage. As Sonic attacks a heavily-armoured ‘super-badnik’ he spares a moment to make a throwaway comment about the timeless technique of hitting “the giant enemy crab in its weak spot for massive damage”. It’s fun, and irreverent, but it never slips too far from the earnestness that makes Sonic and his crew so endearing.

Hesse feels like a fantastic fit on artwork. His representation of Sonic and his crew is spot on, but the way that he manages to keep each character recognisable even when reduced to a bright blur is what really makes this book stand out. Sonic is a kinetic book, and Hesse captures the feeling of constant, urgent movement that made even the earliest Sonic games feel so frantic. There’s scarcely a panel that doesn’t see Sonic skipping forward, Tail’s signature whirling tails in full flow, or Amy’s Piko Hammer in a devastating swing. Hesse’s understanding of the flow of his panels really helps hearken back to the linear fluidity of the games, and eagle-eyed fans will definitely recognise some gameplay easter eggs as they go.

As the book continues and Sonic’s crew gets bigger and stronger they manage to lay some seriously slapstick smackdown on Eggman, to the point that you almost feel sorry for the poor schmuck. The “banter, rinse repeat” approach to battling that Sonic ascribes to has an innocence that feels decidedly refreshing. Much in the vein of similar throwback books like “X-Men 92,” or “Street Fighter X G.I. Joe,” “Sonic: Mega Drive” feels like a honest, wholesome piece of nostalgia from creatives who really know what it is that made those titles so engaging at the time.

Ostensibly billed as a one-shot, Flynn and Hesse manage to cram enough into their limited page count that this story doesn’t really need a resolution. However, there’s a promise on the final page that “Sonic: Mega Drive” will continue in November, and there’s more than enough vibrant, high-velocity fun that I’m already doing that impatient Sonic foot-tap waiting for more of the same…

Final Verdict: 7.0 – As frantic and fast-paced as its namesake, “Sonic Mega Drive” is a primary-coloured primer for anyone wondering what made the 90’s so fun.