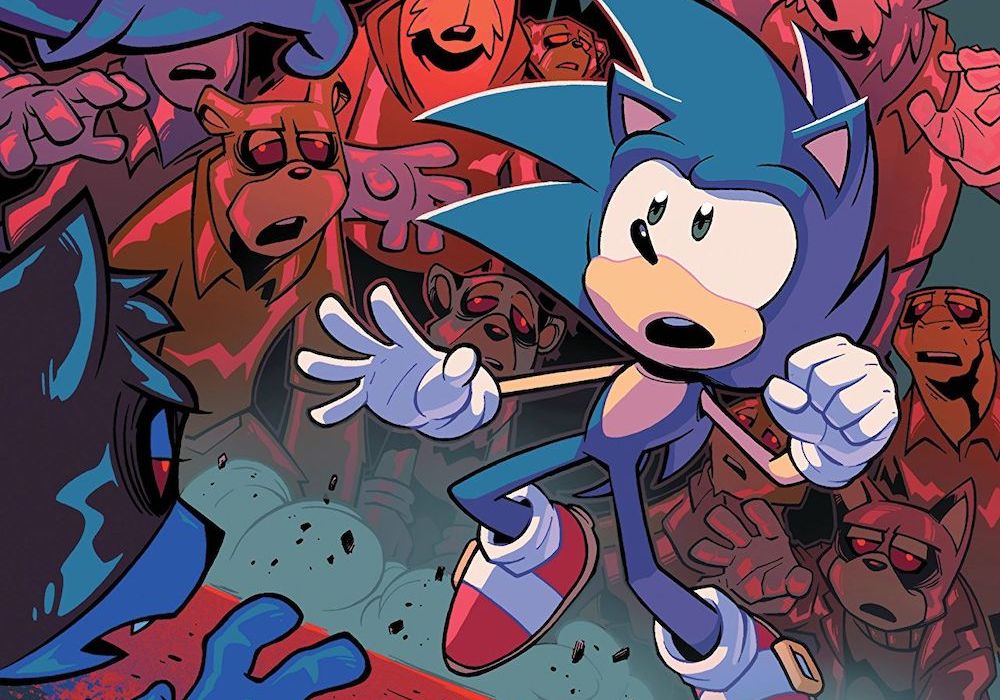 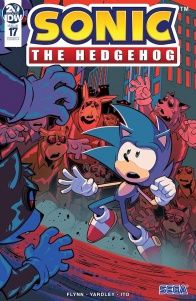 “Plague!” As the infection spreads across a helpless city, the Chaotix Detective Agency stands alone against the horde. Will even the world’s fastest hedgehog be quick enough to provide back-up, or will the city fall? The Chaotix take the case as things go from bad to worse!

Ian Flynn is a veteran of “Sonic the Hedgehog” comics, having been writing them since the comic’s previous run at Archie Comics and stretching back to 2006. As such, he is intimately aware of how exactly to portray the cast of Sega’s most popular franchise, what makes them tick, and how to utilize the elements in unusual ways. Such a level of expertise is definitely important to the current arc, where a disingenuous showing could create a mundane, soulless narrative in keeping with the brainless antagonists at the front and center of “Sonic the Hedgehog” #17.

Luckily, Flynn is definitely up to the task with the plague of “zombots,” a take on the often-used “this story, but with zombies” plot. Every character feels very true to the video games from which they originate, with their own personality quirks on display in spite of how dire things may appear within the city. Furthermore, each cast member demonstrates how he or she is unaccustomed to this “undead” infestation, which itself would not normally appear within a “Sonic the Hedgehog” plot. From the core focus characters to more secondary ones, every member of the cast feels like they fit in with a lighter tale, both bringing together a kinder world and showing how the current horror leaves them out of their element, from needing to figure out the rules of this kind of plague to finding ways to combat it.

By turning focus to Team Chaotix, Flynn is able to develop how the heroes of the Sonic world in general are making an attempt to handle things. The trio of Vector the Crocodile, Espio the Chameleon, and Charmy Bee act as a different, at times somewhat darker group in contrast to Sonic and his closer friends, with the different forms of maturity in the conflicted Vector and the stoic Espio balancing against the youthful idealism presented by Charmy. By splitting the plot between the three trying to fight off the zombots and Sonic trying to continuously run in order to keep from the infection taking over his body, two different kinds of “zombie” stories are shown at the same time, each of them classics in their own right, but without much of a showing for “Sonic the Hedgehog.”

With this expansive world, Flynn does produce a story that is rather horrific on its surface, but simultaneously has quite a lot of heart buried underneath, driving readers to eagerly await what comes after “Sonic the Hedgehog” #17.

Having been drawing “Sonic the Hedgehog” professionally as long as Ian Flynn has been writing the comic (in fact beginning on the same issue), Tracy Yardley’s artwork is integrally linked to the franchise and Flynn’s work itself. As such, he has become very good at knowing just how to draw “Sonic” characters and their surroundings.

As would fit “Sonic the Hedgehog,” Yardley’s art style is very cartoonish, with exaggerated expressions given just enough weight to be taken seriously without sacrificing some underlying good humor. Charmy Bee’s very emotional nature is shown well through his varied facial expressions, from joy to horror to sadness to determination and more. Meanwhile, there is a bit more subtlety to the expressions of Espio and Vector, enough to add their own brand of comedy to some of Charmy’s statements.

More than just similar to a cartoon, Yardley’s style is very animated, its dynamism working very well into the general hyperactivity so common in Sonic the Hedgehog properties in general. For example, aside from Charmy’s overall varied posture, Yardley of course makes good use of motion lines when showing “Sonic the Hedgehog” #17’s eponymous supersonic animal.

Even with the relatively cartoonish artwork, the smoothness of the zombot infection on those who are infected remains very creepy. In contrast to some of the rougher edges or otherwise exaggerated proportions, the silver sheen is not unlike something out of the T-1000 of Terminator fame, further showing how it feels as though it does not belong in this series at all, in a good way.

Leonardo Ito doesn’t have quite the same amount of veteran experience on “Sonic” comics, but his presence is still felt very well through “Sonic the Hedgehog” #17’s colors. Everyone who is not infected is very lively, from the blue tornado left by Sonic’s arrival to the varied colors on different fur hues in general, all of which is put in contrast against warmer coloration for surrounding buildings. Shading helps to showcase both lighting sources and characters’ moods.

Ito further demonstrates his ability with the colorful backgrounds, each of which are capable of easily portraying the tone of a scene without requiring much in the way of additional pencil work, ranging from simple exposure of a time of day in the form of a red or orange sky to a focus in on the action to come with a brighter, warmer color than prior scenes.

Each of these “natural” colors work in contrast to the unnatural sheen of the zombots, each of which have a seemingly in-built lens flare on their metallic skins to show both how tough they are and how inhuman they have become at the same time. Their pupil-less reddish-orange eyes enhance the abominable image.

Final Verdict: 7.5– Showing heart in a mindless plague, “Sonic the Hedgehog” #17 continues to show what a creative team intimately familiar with a property can accomplish.