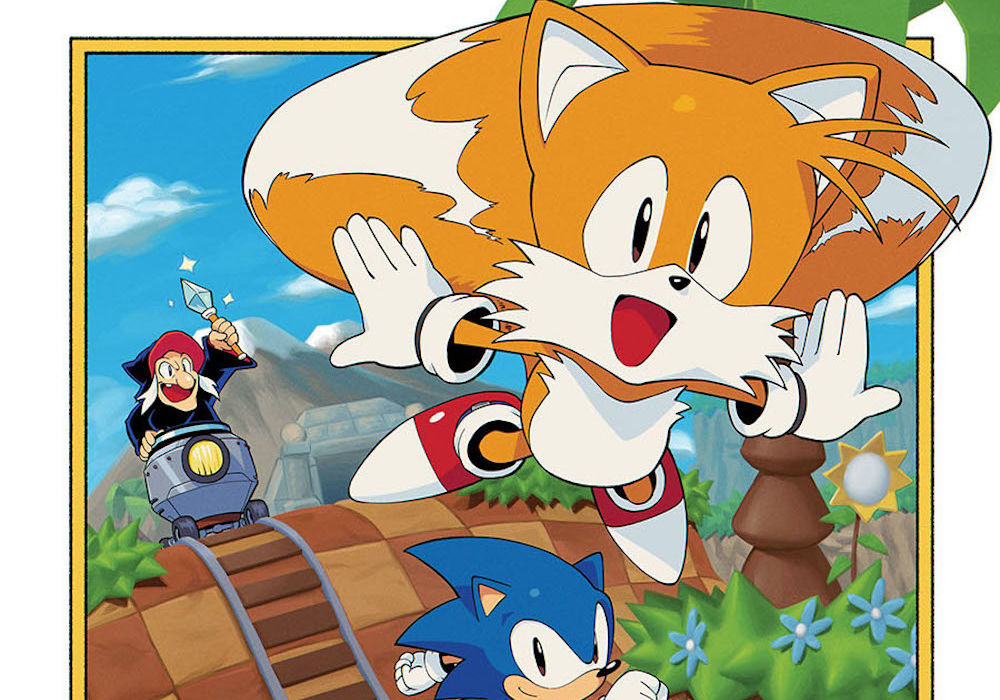 Celebrate thirty years of the Blue Blur’s most consistent ally with this anniversary celebration for Miles “Tails” Prower! 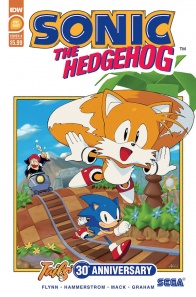 Join Ian Flynn, Aaron Hammerstrom, and Reggie Graham in celebrating Classic Tails’s 30th Anniversary! A comic all about the cutest, smartest, bravest fox around?! Heck yeah! Best buds Sonic and Tails are off to Flicky Island for a much needed vacation! But the relaxing beaches and beautiful mountains have been replaced by railroad tracks and giant crystals–scaring off the Flickies! Tails will have to put on a brave face to defeat the magical villain: Witchcart!

Miles Prower, better known as “Tails,” is a longtime supporting character to the Sonic the Hedgehog franchise. A two-tailed fox who is several years younger than his best friend, he is best known for his brains and ability to fly, mostly used to help the super fast hedgehog achieve his own goals. However, with some rare exceptions in the games, he rarely has a chance at the spotlight. Thankfully, we have a thirtieth anniversary issue to help with an attempt to rectify this situation. While Ian Flynn has been writing many of the “Sonic the Hedgehog” comics (not to mention more recent writing on the video games themselves), it is a rare occasion when he focuses on the oftentimes sidekick instead. How well does such a prolific “Sonic” writer do at bringing Tails into the spotlight to show how he can be a heroic force of his own?

Flynn has long shown he is well versed in Sonic franchise lore, and “Sonic the Hedgehog: Tails’ 30th Anniversary” #1 is by no means an exception. By diving deep into franchise history, Flynn shows that he is more than up to the task. Using a classic era villain from the 1995 game Tails’ Skypatrol, Flynn brings the two heroes back to basics without taking away what makes them great. Sonic is good at what he does, but is not the focus, which lies on the young Prower. Tails is shown to be very good at not only being a hero in his own right, but also a close friend of the various Flicky birds, to the point that they seem like his sidekicks. Even without his later gadgetry, Flynn’s take on Tails is shown as very smart and a bonafide hero, even if he does look to Sonic for approval rather often. While Tails is shown as having issues with his confidence, there is still an inkling there to show that he does not actually need to be a sidekick if he does want to show what he can do, particularly when it comes to his intellect and ability to make closer friendships with the wildlife of Sonic’s world.

Even outside of the hero, Flynn’s writing is very fun. The use of the classic era gives a definite sense of whimsy to the one-shot, and Witchcart is a perfect choice for a villain for this purpose. The use of rhymes and relatively simple magical powers give a lot of room to tell about how comedic she can really be while still being a threat in her own right. From Sonic to Tails, the banter is excellently written and very funny, especially when verbally tearing apart moments of her plot.

The cast present in the one-shot is relatively small, limited to some supporting birds, Sonic, Tails, and the villains, but this minimalist cast works in Flynn’s favor. Rather than being forced to show a lot of different people, he dials down into a rare few, thereby enabling him to give what amounts to, if not actual character development, at least some very heartwarming moments.

Aaron Hammerstrom’s artwork is excellent for this story. As “Sonic the Hedgehog: Tails’ 30th Anniversary” #1 takes place in the earlier days of Sonic stories, the thick, rounded lines of Hammerstrom’s pencils, coupled with Rik Mack’s complementary inks, really bring forth are more lively, expressive, and cartoonish mood for the entire story. It is not without its dire straits, but the focuses in on individual characters, coupled with exaggerated body language, makes the entire product come together akin to a cartoon for younger ages from decades past.

The expressions, coupled with the characters themselves being relatively fantastical, really makes the entire piece feel more relaxed and enjoyable, something the audience can read to settle down from long days. Even the main villain, who is theoretically one of the few humans in the franchise, is drawn with wild, at times wacky expressions, encouraging any given reader to laugh rather than feel uneasy. As a result, this style fits especially well into a one-shot story, particularly one set in such an early period of this multimedia (though primarily video game and comic book) franchise.

Reggie Graham only further enhances this happy, relaxed feeling with the colors of the “Sonic the Hedgehog: Tails’ 30th Anniversary” #1 special. Rather than use deep shadows, the overall use of color is rather bright, as if making an effort to push back a potentially darker tale. As such, even when things feel their worst, the way that Tails and Sonic seem to light up a villain’s lair continues to shine through, helping readers to see that everything will be alright in the end.

For those who may be unaware of or otherwise not well versed in Sonic continuity or games, this one-shot may not inherently draw them in for further tales (no pun intended), but it may be understandable enough for a one-off to perhaps pique curiosity.

Final Verdict: 7.5– Perhaps a bit childish, but not in a bad way, this one-shot is a quite good showing for a sidekick’s anniversary celebration.