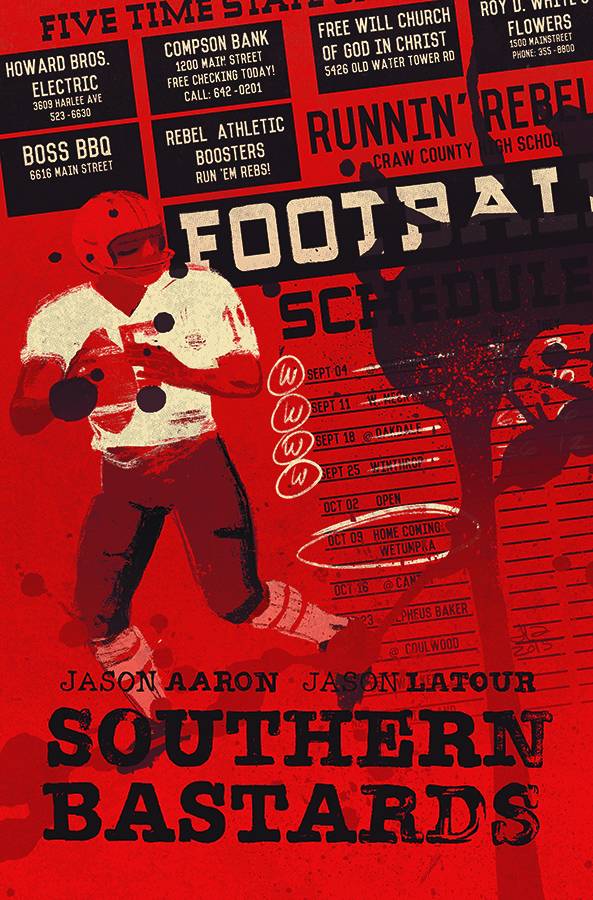 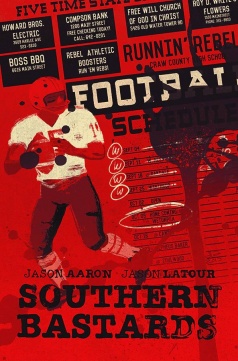 The Summer of the Bastards begins with a new arc, as the Runnin’ Rebs are gearing up for the big homecoming game against arch-rival Wetumptka County. And what better way to start homecoming week than with a murder?

After the shocking and bloody conclusion of the first arc, “Southern Bastards” took a dive into the past of Craw County and followed the grim and violent rise of Coach Boss. There’s always another football game on Friday, however, and these characters are far too restless to dwell on the past. Jason Aaron and Jason Latour have now returned to the present, where it seems that Coach and his cronies can’t help but cause chaos and death throughout the county.

The thing that Jason Aaron loves to do in “Southern Bastards” is use the point of view of the story to subvert the basic expectations of the reader. As the clear protagonist of the first arc, it was surely only a matter of time before Earl Tubbs rallied the townsfolk against their football-obsessed overlord. And Coach Boss, a crude and mean villain as there ever was one, certainly won’t have history that elicits understanding and, dare I say, mild sympathy. The third arc shifts it’s perspective once again, and focuses on Sheriff Hardy, who to this point has appeared to be the embodiment of every stereotype of corrupted and dirty law enforcement.

The sheriff and Coach Boss have stumbled to across the body of assistant Coach Big, who appears to have blown his brains out against the office wall. While Hardy views the situation as a pretty clear cut case, Coach Boss refuses to believe that his mentor could have met such an end. Boss perceives this as an attack on the town, himself and, most importantly, the football team. The high school football coach orders the sheriff to investigate how the rival team from Wetumptka County got away with Big’s murder.

Aaron could have turned this into a story of a crony blindly following his boss’ orders and wanders across county lines to start busting kneecaps. Instead this quickly become a character-focused story that follows one man wallowing in his own impotence. Another set of brief flashbacks highlight Hardy’s previous life as the veritable king of the high school. It looks like Hardy is on his way to becoming the next Emmitt Smith, when a younger but just as mean Coach Boss decides that such an upwards career move does nothing to help his own interests.

Twenty years later, Hardy has turned into a man with the shadow of power and a bad limp. Aaron fills the character’s narration to the brim with bitterness and cynicism towards everything and everyone. It’s not even that he’s angery, as all his anger seems to have been burnt out. He just seems tired of it all. Even the few fleeting moments that remind Hardy of his glory days aren’t enough to cause him to change or re-evaluate himself. He knows what he is, and he can’t even muster the effort to pretend that he’s something else.

As the history of Craw County and its inhabitants continues to expand and grows, so does the artistic portfolio of Jason Latour. After the previous issues sent entirely in the past, he handles the shorter, punchy flashbacks with the same level of attention and finesse. Latour continues to act as his own colorist, and while the color palate is intentionally limited, the artist creates two completely separate tones for each time period. The colors are all darker in the flashbacks, like the memories themselves have become rusted and corroded over the decades.

Latour’s character models for the past and present Sheriff Hardy tell just as much about this character story as the narration. Present-Hardy is a tank, but high school aged Hardy is tank with a rocket propulsion system strapped to the back. He is the lean, mean king of the football team, with the wicked flattop to prove it. While present-day Hardy is still clearly bench pressing in the triple digits, the only six pack he has seen recently is the one in his fridge.

The fact the Latour draws young-Hardy as such as physically powerful character makes his brutal beat-down at the hands of Coach Boss and his goons even more shocking. Coach Boss is so powerful, that even the strongest and fastest person in Craw Country isn’t strong or fast enough to get away from him.

Jason Latour presents the the violence in this issue in a way that is not gratuitous or expletive, but instead as stark and emotionless. Jason Aaron subverts expectations by focusing on the corrupt sherif, only to reveal another victim of Coach Boss. If the origin story didn’t make it clear, it’s now apparent that Boss truly views the people around him as mere x’s and o’s to be lined up and moved around. And, as the ending twist reveals, Boss’ completed disregard for other people is infecting the next generation of Rebel fans. “Southern Bastards” may have returned to the present, but in Craw County all that means is that the violence is a little more fresh.

Final Verdict: 9.0 – “Southern Bastards” continue to get better as Craw County gets more and more twisted.