As Cloonan and Belanger amps up the mystery in issue two of “Southern Cross”, we take a closer look at twists and turns of this deep space whodunnit. 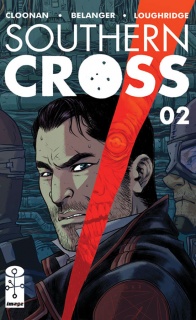 Day two on board the SOUTHERN CROSS’s five-day voyage to Titan, and the mysteries are already piling up. The plot thickens as BRAITH starts making connections, leading her through doors that should have been kept shut.

Issue one of this new series from Image was one of my favourite releases of last month. The dark, moody tone and the gritty, tangible textures of Belanger’s spaceship interiors felt heavily influenced by Alien, one of my all-time favourite films, and Cloonan’s concept felt like a fresh take on the murder mystery mold. The issue’s pacing felt great, and Cloonan managed to deliver the slow, creeping feeling of dread that all good horror movies strive for. Cloonan found success through a number of mini-series, and the initial concept for this book – a five day voyage to Titan – sounds like it has a ready made ending, so I was intrigued when I found out this was being billed as an ongoing. Given the book’s close-knit, claustrophobic vibe, I’m still not sure it wouldn’t work better as a limited run, but I’m definitely enjoying it enough to give some serious investment to an ongoing.

Issue two opens pretty much as you’d imagine, on day two of our protagonist, Alex Braith’s journey. This book manages to encapsulate both time and space in a way that I’ve not really seen in many other comics that I’m reading at the moment. That might seem like a pretty huge statement but allow me to clarify. Belanger’s art fluctuates between panels that show the city-sized Southern Cross floating minutely in the immense void of space and tight, cramped panels of the ship’s interior that really make you feel like the passengers are crammed in like sardines. His meticulous eye for detail and heavy, dark line-work combine to give this book a view of the future that feels utilitarian and grimy, kind of like if you wrapped four walls around Blade Runner‘s depiction of Los Angeles. within the first two pages the reader is completely aware of the submarine-like life that SC’s crew are living, as well as the staggeringly huge abyss that surrounds them. As far as manipulating time goes, the pacing of the second issue is slowed to the point that you feel every second. As Braith makes her way through her day, frequent insert panels capture micro-changes in expressions and posture from both Braith and the people she interacts with. There’s very little in terms of time jumps, and there’s a lot of purposefully slow interactions, both of which give the reader a feeling of creeping, almost unsettling calm.

But, from the way I’ve billed it so far, it kind of feels as though nothing much happens in issue two. Really, this couldn’t be further from the truth. Cloonan has clearly planned an intense personal, and at times internal, journey for her protagonist and this five day trip is going to see it unravel. Given that this is a confirmed long running series, there are definitely going to be sub-plots and characters that need to be established in order for the book to go the distance and this issue sees some of the seeds begin to be sown with regards to that. Braith wakes up to find her bunkmate has disappeared, seemingly without a trace, and she re-meets a number of her fellow shipmates as she tries to establish ‘how you get lost on a ship?’

From the surly Captain Mori to his right-hand woman Zia, right down to the mysterious Kyril, who’s bunking in the room opposite her, every character seems laden with secret knowledge about the enigmatic Southern cross. While it does come across as a little infuriatingly vague at times, it’s a relative staple of the mystery genre for characters to hold out on spilling the beans until the absolutely have to. What’s more, as artist Belanger put it “The scariest stories, the most successful thrillers are the ones that start as a subtle tease, then build to bloody crescendo.” so those of you who feel like this series is moving too slowly, bear with it.

One of the most impressive elements of this comic, in my opinion, is the way that it seems to defy genrification. It’s being billed both by Image and its creators as a sci-fi horror, and the elements are there for sure. There’s a space-ship, there are spooky goings on, and the colour palette is full of ominous, Francavillaian secondary colours. But it’s equally as much a claustrophobic neo-noir mystery book, with as many suspects as characters, and a plot that’s clearly going to be driven by revelations of secrets and morally suspect admissions that mean you’re never sure who you can trust. What’s more, there’s a touching narrative of sibling love and the lengths someone will go to protect their family nestled at the centre of this story that offers a softer side to the tough exterior of Braith. She comes off slightly like a hard-boiled gumshoe at times but, when you consider the root of her fascination with the ship and her complicated relationship with her sister she becomes a lot more than a stereotype.

Last but not least, there are the elements of potentially supernatural goings on that have been hinted at in the corners and at the cliffhangers of both issues so far. Cloonan and Belanger have managed to balance an impressive amount of story elements without the book ever feeling overcrowded (except in the physical sense). While it might feel like slow going at times, this horror-sci-fi-mystery combo is definitely a slow burner that has lots of sweet story calories still to be released.

Final verdict: 7.6 – A page-turner that pits a bunch of mysterious strangers against one another in a confined space on the edge of the galaxy. Need I say more?