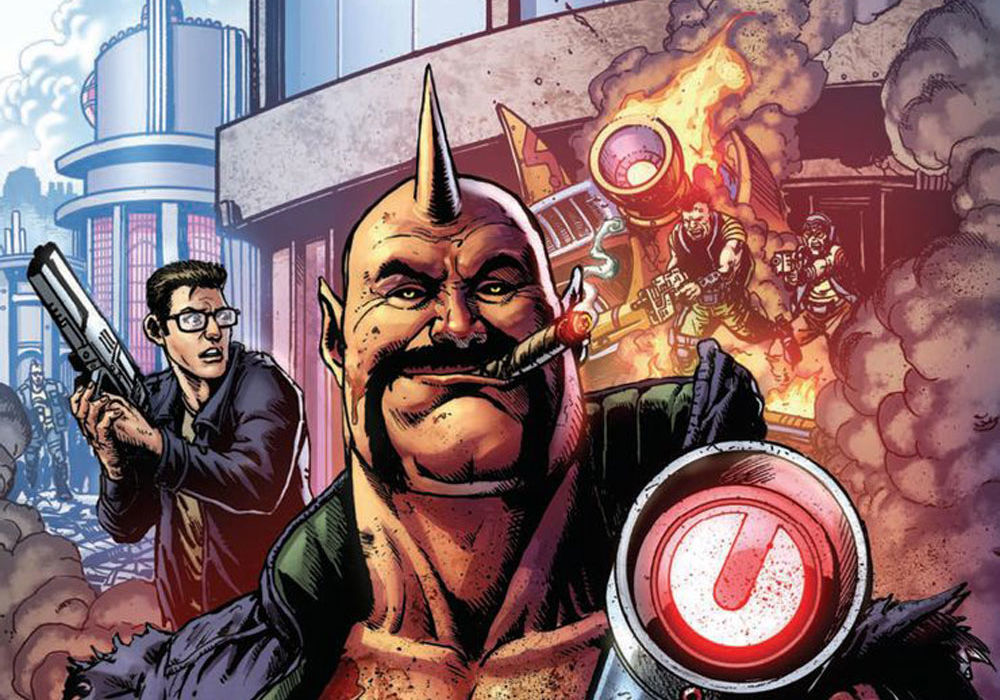 Sometimes, a creator makes all the difference. If I had been given the synopsis for “Space Bastards” without creative team, I would have likely passed it by without too much notice. But given that it is illustrated by Darick Robertson, I went from ‘pass’ to ‘gimme gimme’ pretty quickly. Was the hype worth it? Find out in our spoiler-free review. 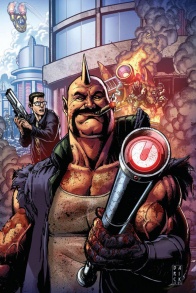 Acclaimed artist Darick Robertson (The Boys, HAPPY!) joins writers Eric Peterson and Joe Aubrey to bring you the tale of the galaxy’s most dangerous employers: The IPS! ONGOING SERIES. In the future, unemployment and job dissatisfaction are sky-high. When you’ve got nothing left to lose, you join the Intergalactic Postal Service (IPS). Its postal fees are steep—and they go only to whomever ultimately fulfills the delivery, making every run a comically violent free-for-all between the most ruthless mercenaries in the cosmos! The interplanetary ensemble cast of Space Bastards, under the volatile leadership of Postmaster General Roy Sharpton, are constantly at each other’s throats trying to settle scores and earn big money. But when a rival corporation’s teleportation technology threatens to make their role in the galaxy obsolete, the Bastards must work together to preserve a job they’ve come to love.

“Space Bastards” has a few things going for it, but none more than its incredibly simple plot, which lends itself to action, new settings, and new characters. In this world, packages are delivered by mercenaries who are out to hurt and kill each other for better packages to deliver. Every time a package changes hands, the price goes up, so you want to pick off a delivery at the last moment to maximize its value. This lends the book an almost Wacky Races tone to it, and leads to no shortage of weird characters who pop up for a panel or two.

The character designs are really where the book shines. Robertson has the benefit of a visually milquetoast lead against which he can play any number of more interesting characters. Roy Sharpton is the head of the Intergalactic Postal Service, and he is a pastiche of every slimy 70s action movie character in one: sunglasses, mustache, headband, vest without a shirt underneath it, dreamcatcher necklace. There are robots, strange looking aliens, and, of course, Manny.

It is hard to talk about “Space Bastards” without mentioning Lobo. With just a slight squint, this clearly becomes a Lobo comic, where the Main Man gets a job delivering packages. Robertson’s artwork pulls off a moderate 90s tribute throughout, and Manny, the secondary lead here, chomps a cigar and is basically playing the role of the Bastich himself. This isn’t exactly a bad thing, as Eric Peterson and Joe Aubrey know what their script is leaning into, and so can be taken as an homage, not a theft.

Manny walks through the pages like he owns the book, all attitude and frontal horn. He pushes the protagonist, David, into accepting his role and embracing the cut-throat, full throttle position he’s taking at the IPS. He doesn’t do this in an ‘old cop showing the rookie the ropes’ way, but by blatantly disrespecting him and pushing him to the brink of what he is able to accept before cracking. While there may be a little cheering from the reader when David stands up for himself, it is not the fist-pumping celebration that may be expected. Although David is clearly a loser, the situation is more complicated than just someone pulling themselves up by the bootstraps.

Robertson’s art does almost nothing to glamorize the IPS, even from a fun action standpoint. David is able to survive to the end of the issue not through doing cool shit, but by stealing and good luck and losing his humanity a bit along the way. It’s not a triumph, it’s a shrug.

It is that attitude that allows this book to not feel like a retread of a 90s space comic. While there was always a wink and a nod with Lobo, it was never quite this bleak. By centering the book on a regular human, there is more danger than there would ever be in a Lobo story. But that attitude is undercut by the humorous touches, both visually and in the script. I enjoyed these, but it somewhat scrambles the tone. Yes, there is a place for both in the story, but this first issue doesn’t exactly nail the balance. If we cared more about David, the drama would work better, but if we focus more on Manny, the humor would sing a little more. Until the book establishes the right balance between the two tones, it will always read a bit uneven.

Ultimately, there isn’t a ton to say about “Space Bastards” #1, outside from heaping more praise on Robertson’s artwork. The more sedate sequences, his panel work is very traditional, but when things get interesting from a plot perspective, so does the way that Robertson constructs the page. But Robertson’s real skill is in his character work. David’s acceptance into the world of the IPS isn’t telegraphed by any dialogue. Robertson, instead, slightly tweaks his body language, and it makes all the difference in the character’s perception. David goes from dud to chicken shit to bad ass with slow, almost imperceptible changes over the course of the issue, and when it all hits, it feels both earned and still unexpected. No disrespect to Peterson and Aubrey’s script, but that doesn’t happen without someone as masterful as Robertson behind the pencil.

Final Verdict: 7.0 – A visually fun, if ever so slight, space action book.