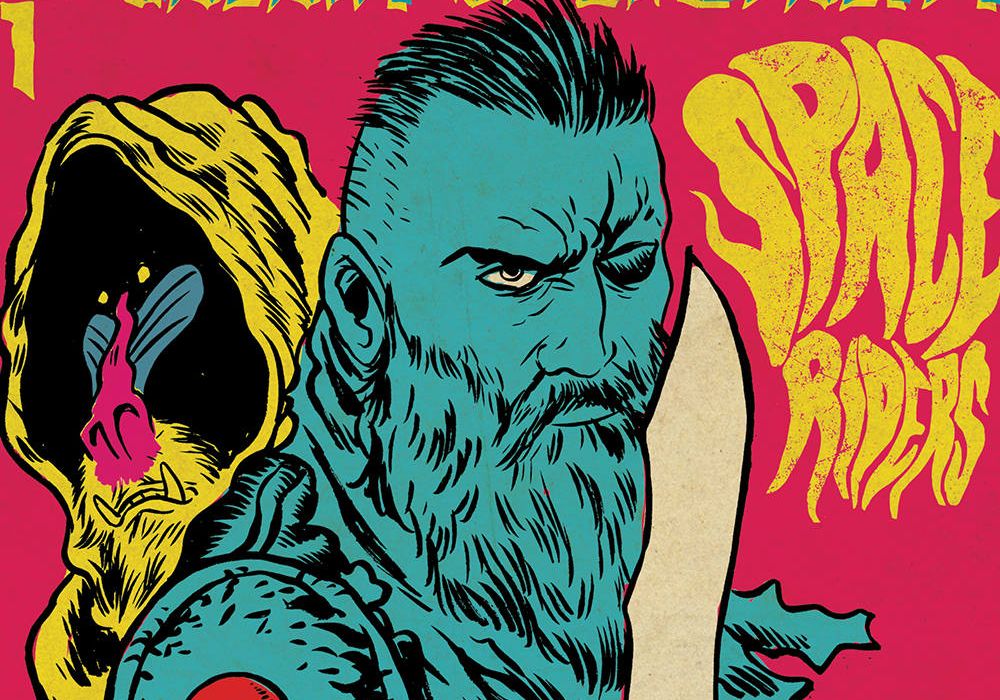 What kind of comic book is “Space Riders: Vortex of Darkness” #1? Well, it’s the kind of comic where we get to see someone ride through the void of space with little to no protection on a motorcycle with the literal head of a cobra on the front. Oh, and he’s on his way to fight a space goddess who gained her wicked powers by having literal sex with literal devil, chopping off its head, and then bathing in its blood.

Yeah, it’s that kind of comic. 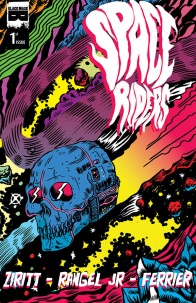 It’s been twenty years since the riders defeated the DESTROYER GOD OF EVIL and saved the galaxy. But when THE MOTHER OF ALL EVIL GODS appears and threatens to take control of every dimension and every strain of possible reality, the now cybernetically-enhanced ex-riders will come together and travel into her mind to ASSASSINATE HER SOUL!
It’s a suicidal mission into an infinite vortex of blood and death!

The main character of “Space Riders: Vortex of Darkness” #1 is named Peligro, which is Spanish for Danger. We get to find out how the main character lives up to his name by having him pummel, stab, and eviscerate a bunch of space aliens at what can only be described as a the sleaziest bar in the entire galaxy. After that, the comic stomps on the gas and doesn’t let up for a second as Peligro helps rescue his friend, a magic space baboon named Mono. Together they embark on crusade across the galaxy to save the universe from a queen of darkness who, as stated above, gained her powers by having sex with the devil, chopping it up into little bits, and bathing in its blood. This is not a subtle story.

The script comes courtesy of creator Carlos Giffoni, and this is his sophomore comic book effort after his debut title ‘Strayed’. If anything, “Space Riders: Vortex of Darkness” #1 is a good effort and solidifies Giffoni’s place as a writer who enjoys writing the esoteric and bizarre. The story and dialogue create the kind of hyper masculine, ultra-violent, super smutty story and atmosphere that would make a very good heavy metal album cover or the plot of a sleazy grindhouse film with a slightly higher budget. It’s so crazy, that it can’t help illicit a few laughs along the way for just how over the top it is.

With that being said, the comic does have problems. The dialogue feels stilted and awkward at times and it’s very easy to view the story as immature and childish. For every chuckle the comic creates due to the story, it generates a groan at the frankly absurd amounts of gore and sex it packs in. It’s a crude, ill refined, excessive book that lends credence to the old, tired arguments that comic books are morally corrupting readers minds. Long story short, it’s not a comic for everyone, and anyone who doesn’t like violence for the sake of violence would probably be better off not reading this.

However, what it lacks in refinement it more than makes up for in a crazy sort of energy that could have only been conceived by a pair of creators with unlimited creative freedom and a truck load of happy pills and psychedelics.

Speaking of psychedelic, that is exactly what the art looks like. The art for “Space Riders: Vortex of Darkness” #1 comes courtesy of Alexis Ziritt, and it the perfect companion to the wild and crazy script. The rough lines and weird proportions give the comic a very alternative feel to it that would probably make a book like this more at home in a 1970’s San Francisco head shop rather than the shelves of a comic book store. Of course, anyone who might look at this while on something would probably have a bad trip because the comic spills gallons of blood and internal organs with gleeful abandon and doesn’t shy away from showing gruesome acts of sex and violence. It’s wild, it’s crazy, and it’s awesome.

On top of the rough and tumble line art, special mention deserves to go to the coloring job on “Space Riders: Vortex of Darkness” #1 as well. Each panel is dominated by a single, bright, heavily saturated color scheme that makes the comic look and feel like an old Kirby book, something you might see in an early ‘Fantastic Four’ story. It even has a bit of Kirby crackle in some of the space scenes. On top of that, the book is artificially aged to make it appear like it has cracked and yellowed pages, giving the whole book the feeling like its supposed to be something you dug up in the bargain bin of the cheapest, dustiest, sleaziest comic book story you could find. It all comes together in an impressive package that makes the comic a great work of art and a great thing to look at.

“Space Riders: Vortex of Darkness” #1 is a comic that is going to polarize a lot of readers. Those who don’t like it will point out that the story and artwork feel amateurish and cheap while the comic relies far too much on shock value, blood, and smut. On the other hand, those who do like it will appreciate the high levels of energy and the willingness to commit to an absolutely over the top level of insanity and excess that makes brings this story into so bad it’s good territory.

Personally I like this comic, although I would completely understand if someone didn’t agree with it and decided to give it a pass.

Final Verdict: 7.9-The story leaves quite a bit to be desired, but the art makes this comic a joy to look at.