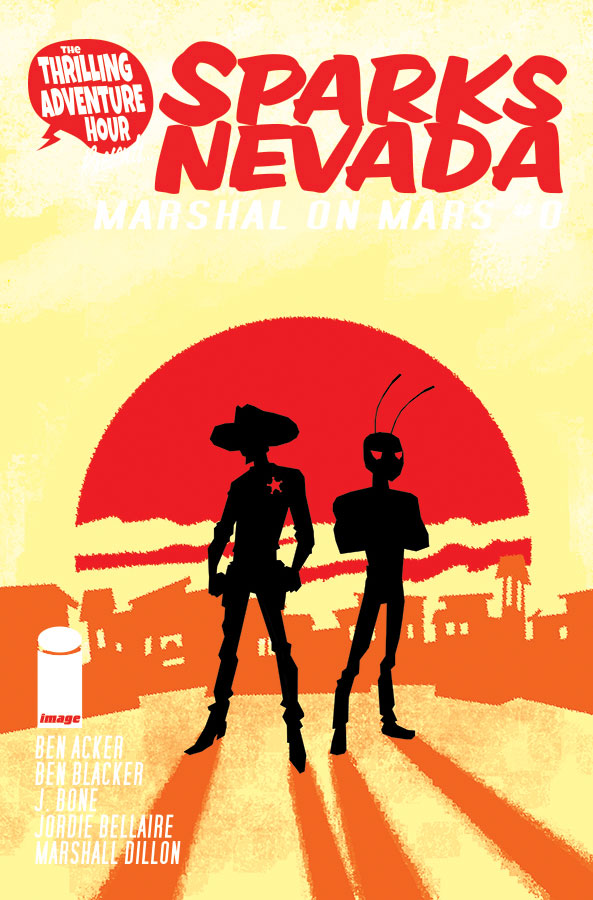 I could write an intro to this review or I could just link you to the Sparks Nevada theme song. Yeah, we thought so. Shine your astro spurs and check out our spoiler-free review below! 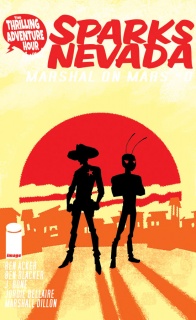 BASED ON THE HIT NERDIST PODCAST!
Shine your astro spurs and don your robot fists! Justice rides a rocket steed across the crimson plains of the fourth planet, where one man brings fear to robots and aliens…and hope to humans who make this frontier planet their home. He is…SPARKS NEVADA: MARSHAL ON MARS!

If you’re not familiar with The Thrilling Adventure Hour, it’s a podcast on The Nerdist Network (the same network that belongs to Chris Hardwick, who still hasn’t answered my challenge to fight him) and it is more or less the greatest thing ever. It’s a series of old-timey radio shows written by Ben Acker and Ben Blacker which feature your favorite comedians. Paul F. Tompkins, Aubrey Plaza, Paget Brewster from Criminal Minds, all play wild and wacky characters in radio plays performed live in front of an audience with sound effects and a whole orchestra too. Honestly, go check it out. No matter what type of person you are, you’re going to dig it, at least on some level.

One of the more iconic characters on The Thrilling Adventure Hour is Sparks Nevada: Marshall on Mars, who is exactly what he sounds like. With his partner Croach the Tracker, a Martian under perpetual onus to Nevada. If you don’t know what an Onus is, don’t worry, the duo spend about half of every episode arguing about the whole deal.

“Sparks Nevada: Marshal on Mars” #1 is a follow-up to issue #0 (because numbering in comics is confusing and terrible.) and, if possible, I’d suggest #0 (also penciled by J. Bone) first. That issue tells the story of how Croach came under his first onus to Sparks and it’s oddly charming in the way that all comics about Martian tribes, robot bandits, and black hole lassos always are. Seeing TAH characters on the printed page rather than hearing them through headphones is weird, unless you read the original graphic novel from a while back, but J. Bone does a tremendous job of really building the world of Sparks Nevada in a way that doesn’t contradict anything you’d hear on the podcast but enrich it. Bone excels at breathing life into his characters, infusing Sparks and company with the same vibrancy that makes them so appealing to listen to.

Bone isn’t bad with the action sequences, neither. One particularly great moment is the chase scene between Sparks, Croach, some caravan passengers, and an army of robot bandits. There’s a noticeable flow in the sequence that keeps the eye’s interest piqued, especially when the robot bandits are surrounded by alien bandits (it’s always bandits). Bone’s eye for what makes a great action sequence translates the actions usually covered by dialogue and imagination in the show and brings them to the page in a visceral way.

That’s not to say the grossly verbose and lethally exposition-filled dialogue that’s practically defined Thrilling Adventure Hour isn’t present in this comic. For one, there’s an entire panel practically FILLED with a kindly old man explaining the logistical reasons why any of this comic is happening. Obviously, Ben Acker and Ben Blacker are not hiding from what made their shows so distinctive with their old timey (there it is again) dialogue present in practically every part of the comic. If you’re a regular listener of the show, it should be pretty easy to imagine Marc Evan Jackson’s smooth voice accompanying Sparks Nevada. If not, the writing style is distinctive enough to recognize as a bold stylistic choice.

However, not everything in this comic is aliens and fighting. What makes “Sparks Nevada” so engaging is how human the characters are, even Croach the Tracker. The caravan riders stop to pet Nevada’s horse Mercury and comment on how cute he is, which makes Sparks proud. Croach, despite how aggravating and confusing it can be for all parties involve, deeply believes in his onus to Sparks and the friendship(?) that blooms out of that obligation is frankly adorable. Hell that’s not even mentioning scenes like Ornery Lou handing the Butterfly Kid his little hat. I mentioned that J. Bone was great with action scenes but he really excels at making you go “D’aww!” at robot bandits too.

Final Verdict: 8.6 – “Sparks Nevada: Marshal on Mars” #1 is an excellent introduction into the world of The Thrilling Adventure Hour that pushes past the boundaries of the original show’s medium. Praise Nah Notek.