I hated the ending of Man of Steel. Hated. It. The funny thing is, I enjoyed most of the film. Man of Steel has high stakes, epic action sequences, a solid Superman in Henry Cavill and a compelling villain in Michael Shannon’s Zod. None of that matters though, because it also has Kal-El snapping Zod’s neck. There are already multiple think pieces explaining how that ending is contrary to Superman’s character so we don’t have to get into that. My point is that the movie royally fumbled right at the end. A bad ending trumps everything before it. “Sparrowhawk” has been superb so far but I was worried picking up this last issue. Does “Sparrowhawk” #5 pull a Man of Steel…or does it stick the landing? 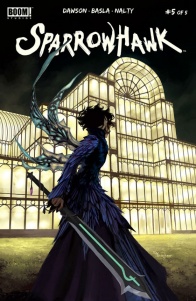 Written by Delilah S. Dawson
Illustrated by Matias Basla
Lettered by Jim Campbell
Colored by Rebecca Nalty
Art’s quest has led her to the Unseelie Queen’s palace and the terrible sacrifice she’ll have to make to return home.

Of course it sticks the landing. “Sparrowhawk” #5 is amazing, the best issue of an already stellar mini-series. This comic opens right where the last one left off, our heroine Artemisia mourning the fallen Warren. His death triggers her final transformation and she’s finally ready to return home. At the last minute, Crispin reveals the only way out of Faerie is to pull someone else in. Art sees her sister Caroline and pulls her in.

The fearsome Artemisia rides to confronts the Unseelie Queen and the two duel to the death. Art wins and reverts to normal, only to realize the horrible cost of her victory. “Sparrowhawk” ends with Caroline back in Faerie where her sister started, fresh off her first kill. A smiling Crispin promises to help her return home and kill Artemisia. Caroline has no idea who that is and the cycle of violence starts all over again.

In “Sparrowhawk” #5, Delilah S. Dawson delivers a truly tragic ending. It hits especially hard when you think about where Art first started. Artemisia was innocent and pure at the beginning of the series. Over five issues, she’s transformed into a predator, completely opposite what she was. Art didn’t want to be a colonizer like her father, just taking whatever he wanted. Yet, she has destroyed everything in her path and had no problem lopping off the Unseelie Queen’s head. Art wanted love and killed Warren, the closest thing she had to it. She wanted to avoid the violence in Faerie but became the most formidable being there.

Artemisia hated the Unseelie Queen but ended up just like her. In their duel, during a gripping exchange of dialogue, the Queen aptly refers to them as ‘two sides of the same blade’. Both have adapted to their new environments and are just as ruthless. Art especially hates the Queen for subjecting her to Faerie and ends up doing the same to Caroline. Artemisia went to great lengths to protect her beloved sister and even greater lengths to reunite with her. For all her struggles though, our heroine is granted a Pyrrhic victory at best. A temporary one at that, if the cycle does indeed continue. It was all for nothing.

Sometimes, comics have good stories but not-so-good art or vice versa. Fortunately, “Sparrowhawk” succeeds on both fronts. The art of “Sparrowhawk” has been a triumph through the entire series. Each issue demands a revisit for the drawings alone and this one is no exception. It’s full of little details that you might miss at first. For example, credit should go out to letterer Jim Campbell because the font and shape of Art’s text bubbles have changed to match her transformation and revert to normal as she does.

Matias Basla has a very distinct style that fits the fantastical and violent nature of this book. Artemisia’s gradual physical transformation over the series has been a marvel to behold. I’m a little afraid of her final form here (nothing screams demonic like two sets of horns) and I was especially terrified of Crispin on that final page. The Faerie creature has clearly been up to no good from the start but this is the first time he came off as truly chilling. That entire last page really helped the tragic ending sink in.

The final sword fight is fantastic too, it’s full of dynamic energy. Basla even gets creative with the panels. The sword zipping towards Art and escaping the confines of the panel like a 3-D image is a standout moment. The use of slanted or jagged panels (or the absence of panels altogether) really helps create a sense of motion.

The efforts of colorist Rebecca Nalty should be noted as well. “Sparrowhawk” is a violent book but it is by no means dark. The colors are vibrant and her choices are just as creative. I wouldn’t think to use background colors such as yellow or neon green but it sure is effective. Some times she uses the same color in gradually darker shades to correspond with gradually rising action. It’s clear that each member of the creative team brought their A-game to give “Sparrowhawk” the thrilling final issue it deserves.