Fan favorite writer Chip Zdarsky turns his hand to Spider-Man, and he’s returning him to the Friendly Neighborhood. Read on for our review, which contains minor spoilers 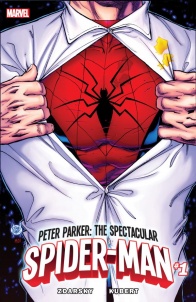 SPIDER-MAN RETURNS TO THE FRIENDLY NEIGHBORHOOD! The webslinging, wallcrawling wonder returns to New York City in the all-new PETER PARKER: THE SPECTACULAR SPIDER-MAN. A companion series to the best-selling Amazing Spider-Man series, Peter Parker is going back-to-basics for big heroics in the Big Apple. Featuring adversaries old and new, be there as Spider-Man returns to his friendly neighborhood for his never ending battle against crime and the dreaded ‘Parker Luck’.

There’ll be plenty of reviews that talk about how this feels like a classic Spider-Man story, one that takes the character back to his roots and how this book just ‘feels’ more like a traditional story than most of the recent “Amazing Spider-Man” plots. While all of that is true, what hopefully won’t get lost in the shuffle is just how well Zdarsky makes this feel entirely fresh and modern at the same time, something that is perhaps an even greater feat.

With a main story and a back-up (featuring art by the fantastic Goran Parlov,) “Peter Parker: The Spectacular Spider-Man” #1 is setting up a greater mystery with subtle clues, new and returning supporting characters, and more than a couple of intertwining plots, all spinning around each other like the proverbial plates. If this feels like a lot for a debut issue, you’d be right; there is much to unpack here, but in a way that feels more rewarding than busy. Zdarsky is clearly planning ahead, and that manifests in a richly layered world with callbacks to classic tropes sat right alongside the fresh takes. It’s a book that’s unafraid to face the legacy (a loaded word at Marvel currently) of the franchise head on, casually sending up the traditions in a way that always feels warm and never veers into the mocking tone that lesser writers may have taken.

The issue opens in a familiar way, with Peter Parker recounting his origin. But before you groan at the repetition and comment on how, despite every book being someone’s first, there’s no way that someone doesn’t know this story by now, Zdarsky is fully aware of that; it’s why, when we pan out and see that Peter is talking to The Human Torch, Johnny interrupts him, berating his attempts to tell him something that he – and all of us – already know. It’s a fun way of getting that origin out there for those, perhaps younger, fans that have come straight from the new movie into the comic shop, while simultaneously setting the course of the book moving forward. This is an approach that adheres to the traditions, but has the self-awareness to call out those tropes at every available opportunity. Further than that, what follows is a conversation between the two close friends portraying two people sharing a bond that feels genuine and open. It’s rare that modern superhero books take the time and page space to let relationships like this breathe, and while their friendship is well established by now, it’s refreshing to see the two of them just hanging out and sharing lunch. There are many moments like this throughout the issue, moments that could be considered extraneous in other, perhaps more streamlined, action oriented series, but “Peter Parker: The Spectacular Spider-Man” #1 is taking a more intimate, fun and engaging approach that unpacks the everyday life of Parker and his alter-ego.

Adam Kubert’s art matches the tone and attitude of the script, adopting an aesthetic that feels instantly classic – Spider-Man contorting his frame in wild ways as he swings in front of a New York cityscape – yet feels fresh and new. The aforementioned 6-panel origin is told in a blue-toned, sketchy style that recreates classic panels from early Ditko tales, before continuing the rest of the issue in a way that explores the whole page in a relaxed, open panel style. His characterization of Parker is captured in strong body language and a wide eyed, expressive Spider-Man mask, and the supporting cast – a vital component of any Spidey story – is strongly defined. New cast members include a love interest as well as a potential recurring ally, and both are fleshed out in ways that give them unique and interesting characteristics, Kubert and Zdarsky working together to craft an original and engaging roster moving forward.

Kubert’s pacing is superb, and seeing that his work here is structured around a script that contains many jokes – this is still Chip Zdarsky after all – his comic timing allows that humor to really shine. Some visual gags (one where new character Rebecca London tosses her card at Spidey expecting it to stick to his suit because “I thought you were – you know – sticky!”) land really well, which is deceptively complex for an artist. Here though, in moments both humorous and heartwarming, “Peter Parker: The Spectacular Spider-Man” #1 is structured extremely well.

There’s a backup story that adds a further layer to the mystery and demonstrates that Zdarsky isn’t just here for the laughs. There’s a chance that things could get very dark for Spider-Man in this series, but if the script maintains the quality on display here then there will always be a realistic and natural levity involved. Parlov’s art in this shorter story tackles a fight sequence between Spidey and an unexpected foe, and the choreography flows expertly from one panel to the next in a way that demonstrates the unique fighting style that someone with Spider Sense would adopt – a point that’s important for the narrative.

“Peter Parker: The Spectacular Spider-Man” #1 is filled with smaller, character driven beats that work together to build an issue, a story, and a world that feels instantly familiar to old and new fans whilst keeping the momentum moving forever forward. Zdarsky utilises the tropes of classic Spidey tales as a springboard into a series that feels rejuvenating for the character and never reliant on nostalgia. A sharp, witty, and natural script works in tandem with wonderful art by both Kubert and Parlov to present a new Spider-Man ongoing series that adds a brand new energy to the franchise and as such shouldn’t be missed.