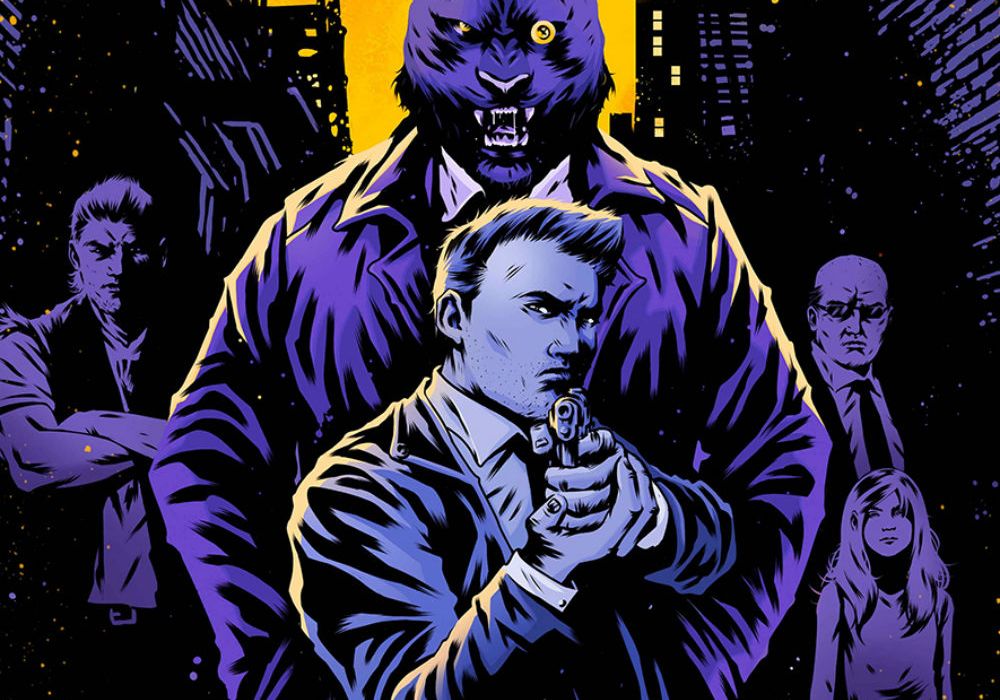 Remember that bleak pastiche of Archie comics that Brubaker and Phillips used for an arc in “Criminal”. Well, we might have to retroactively change its name to ‘Second Last of the Innocent’. Because this week, David Pepose and Jorge Santiago Jr. bring a similarly dark sensibility to their grown up analogues of Calvin and Hobbes. 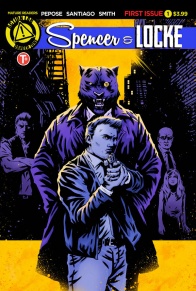 When his grade-school sweetheart is found dead, there’s only one friend Detective Locke can trust to help solve her murder — his childhood imaginary panther, Spencer. But when they face both a vicious crime syndicate and memories from Locke’s traumatic youth, can this unlikely pair survive long enough to find the truth?

Near the end of “Spencer & Locke” #1, there’s a scrap between Locke and Stanley, tattooed suspect and former childhood bully, that seems to perfectly encapsulate the series aesthetic. Across a nine-panel grid, Jorge Santiago Jr. bounces effortlessly between a cartoonish take on noir (something more akin to Michael Avon Oeming’s work in “Powers” than to Philips’s work on “Criminal”) and the classic Sunday morning comic-strip stylings of Bill Watterson. The styles tumble back and forth, panel to panel. In one, we’re in the present moment as Stanley axe-chops a chair violently to the ground, narrowly missing Locke, with broken splinters flying free of the holding lines. In the next, a blue panther tumbles around a childlike Stanley as rough-sketched stars, planets and spirals radiate out to indicate bumps and scratches.

The interplay between the two styles quickens the pace of the fight itself, but more importantly, it gives David Pepose a chance to frame how Locke sees the world. The final image in the sequence has Stanley wrenching a literal plush panther from Locke’s hands. So, two things: Not only does Detective Locke go everywhere with his actual, stuffed childhood toy, but he tends to view life through a lens that’s been very much skewed by a traumatic youth. Far from being a mere callback to its stylistic precedent, the “Calvin & Hobbes”-esque panels that are cut into the brawl show that Locke still thinks of Stanley as that playground bully. But since we only see Spencer fighting the tormentor, it gives the definite impression that the panther is more than just an imaginary friend. He’s a protector, a savior even.

While “Calvin & Hobbes” used the power of imagination to convey the excitement, wonderment and freedom of childhood, “Spencer & Locke” #1 seems like it wants to use that same lens to show imagination as a coping mechanism. By calling back to Watterson’s style in various flashback scenes, Pepose and Santiago Jr. are orienting us nostalgically towards those quaint, playful stories. It makes it all the more bleak when the floor is cut out from under that nostalgia, and we see flashes of Locke’s abused and violent childhood. But in that light it makes plausible sense that a child who imagined a jungle cat to help him through those days might grow up as a detective and keep imagining that friend as someone to help him through his nights.

And yes, it’s a bit of a silly premise. But Pepose recognizes this and plays it up to inject some welcome humor into an otherwise dour tale. After their initial investigation of the crime scene, Spencer and Locke debrief at a coffee shop. As they trade theories back and forth, a waitress approaches with a refill of coffee and asks who Locke is talking to. The panel pulls back to show him across the table from a stuffed blue panther sitting upright, but otherwise lifeless, on the other side of the booth. “Don’t judge. You probably got weirder friends,” the narration reads. Locke’s looking up towards the waitress, but he’s very much looking to us as readers as well.

Just to quickly touch on the narration in “Spencer & Locke” #1, Colin Bell delivers it as cursive script on scraps of paper torn from a lined yellow ledger. Granted, he’s not the first to use this approach, but here it’s used to great effect to sell the police procedural aspect of the story. His sound effects also integrate very well into the artwork to amplify gunfire, doors busted open, and chairs broken to kindling off a person’s face.

Jorge Santiago Jr.’s art is fantastic throughout. He handles the style change with aplomb, and absolutely nails the energetic beats in Pepose’s script. Instead of focusing on moments of impact, Santiago Jr. picks the moment immediately before or after that blow is struck. There’s a half-page panel of Stanley, chair raised overhead and just waiting to rain it down on Locke, that really ratchets the tension. In other places, he adds small details that bring so much life to scenes. When the title characters are at the coffee shop, Locke holds a steaming mug, while Spencer sips from an apple juice box. And just in general, the design of Spencer with one button eye, never lets us forget that he’s the personification of Locke’s toy, even when he’s standing six feet tall on his hind legs in a dapper suit and tie.

Now your mileage may vary based on your personal reverence for “Calvin & Hobbes”, and whether or not you want to see some pretty stark skeletons in their analogues closet. But overall, “Spencer & Locke” #1 is a great debut. Pepose and Santiago Jr. have a strong grasp on the noir conventions they’re playing with, as well as the comic strip history their pulling from.

Final Verdict: 8.5 – While Spencer plays it pretty tame this issue, I can’t help but think Pepose and Santiago Jr. are biding their time before truly unleashing the homicidal psycho jungle cat.