“Spencer & Locke 2” #1 marks its return with a deadly antagonist who feels like the other side of the same damaged coin as our hero, Locke. Spencer and Locke must find and stop a sniper before he kills again. But when Locke meets that sniper and realizes he’s been similarly traumatized, it may send his already unbalanced psyche spiraling. Especially now that he has more to lose. 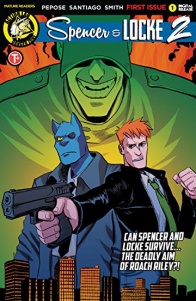 Suspended by Internal Affairs, Detective Locke grapples with the demons of his past alongside his trusty partner, his childhood imaginary panther Spencer. But when Spencer and Locke face a scarred soldier named Roach Riley, will this unlikely pair finally meet their match?

Picking up shortly after the end of the first volume, “Spencer & Locke 2” #1 does what all the best sequels do: it raises the stakes without losing any steam. Locke now has a daughter, and a girlfriend, of sorts. Before, Locke had nothing to lose. But now, he has to keep his loved ones safe, and he needs to be fully reinstated with the police force to help support his daughter. Unfortunately, Spencer, Locke’s imaginary best friend based on a childhood toy and possible anthropomorphization of other aspects of his personality, is becoming angrier, more feral. He could be a wild card in the days to come. And now, there’s a new killer on the loose. One that Spencer and Locke shouldn’t pursue while Locke is under investigation, though they will anyway.

David Pepose ensures readers don’t have to have read the first volume to enjoy “Spencer & Locke 2.” Not only does he have a catch-up page before the comic begins, outlining all the important events new readers may have missed, but he and illustrator Jorge Santiago, Jr., work hard to bring new readers up to speed, even if they skip the “Previously in Spencer & Locke” preface.

For example, in a single 9-panel grid at the beginning of “Spencer & Locke 2” #1, Pepose and Santiago, Jr., convey a vast amount of information from past and present elegantly and artfully. The panels show Locke having to take a Rorschach inkblot test to measure his sanity, reminding readers he’s unstable and leading into how he’s under investigation by Internal Affairs. It slyly shows Locke wanting to cover up his trauma, juxtaposed with scenes detailing how his mother was abusive, how he killed his criminal father and how an old friend and the mother of his daughter was murdered. And, there in the center, we see the shadow cast by Locke as he sits in the chair takes the shape of Spencer. For a 9-panel grid to tell us so much with no captions and only the barest dialogue, it’s nothing short of brilliant.

In case it’s not abundantly obvious, “Spencer & Locke” is loosely based on the classic Sunday paper comic, Calvin and Hobbes. Like a fractured fairy tale, this version looks at how someone like Calvin would be as an adult if he’d come from a broken home that left him with no small amount of Post-traumatic stress disorder (PTSD). The first issue from the first volume even started with a cartoon version of Spencer and Locke together, extremely similar to the style of Calvin and Hobbes.

The beauty of “Spencer & Locke 2” #1 is in its parallels to the first volume and between its characters. Similar to the first arc, it also begins with a cartoon in the style of a Sunday funny, but this one is closer to Beetle Bailey. It details antagonist, Roach Riley’s own traumatic experience, leading to the troubled person he is today. Jorge Santiago, Jr. and colorist, Jasen Smith’s abilities are impressive, switching up their style and palette to fit specific Sunday funnies, then back to the “real world” and the gravitas of its noir genre trappings. However, even within a world filled with moody lighting and the darker colors typically found in angsty detective stories, Jasen Smith uses pops of bold, vibrant color that feels more at home in those newspaper cartoons. It’s a reminder that there’s a little bit of that simpler, cartoon reality present, just as within those satirical versions of Calvin and Hobbes and Beetle Bailey, there’s brokenness there.

Especially with the Sunday funny theme, it’s easy to see how Locke and Roach are similar. Though each deals with their PTSD in different ways, there’s a palpable connection there. It’s a little reminiscent of the TV show, Dexter, showing a traumatized man trying to be as good as he can, yet drawn to others who have similar darkness in them. Locke seems intrigued in much the same way, hinted at in his treatment of the cockroach that foreshadows and symbolizes Roach Riley’s presence hanging heavy over our heroes: rather than stomping on the roach, as many would, he imprisons it in a glass. Locke knows Roach must be stopped, but has no intention of killing him. At least, we haven’t seen any evidence of that in “Spencer & Locke 2” #1.

Perhaps the biggest visible difference between Roach and Locke, outside of the fact that one is currently offing public servants, is the narration. Letterer Colin Bell handles each in a way unique to their character. Locke’s captions are on scraps of ruled paper, alluding to his more childish characteristics in a way similar to the Sunday funny-like cartoons that sometimes pop up in his narrative. However, for Roach Riley, we get a reversed-out copy in a typewritten font, nodding to a more evil and militaristic persona.

Bell’s sound effects work in tandem with Jorge Santiago, Jr.’s art and panel design in “Spencer & Locke” to convey action and physical trauma. Scribbled borders show when a panel can’t contain all the action inside it, just as pained shouts are cut short by word balloons and panels that are too small to convey the pain and emotion within them.

With edits from Nicole D’Andria, the entire creative team is trailblazing new territory in the noir genre. Each creator is thinking big, operating at such a high capacity, it makes for an extremely enjoyable read. Hard to believe though it may be, “Spencer & Locke 2” may end up being even better than the first volume.

Final Verdict: 9.0 – It doesn’t take an experienced detective to see that “Spencer & Locke 2” is one high-quality book.