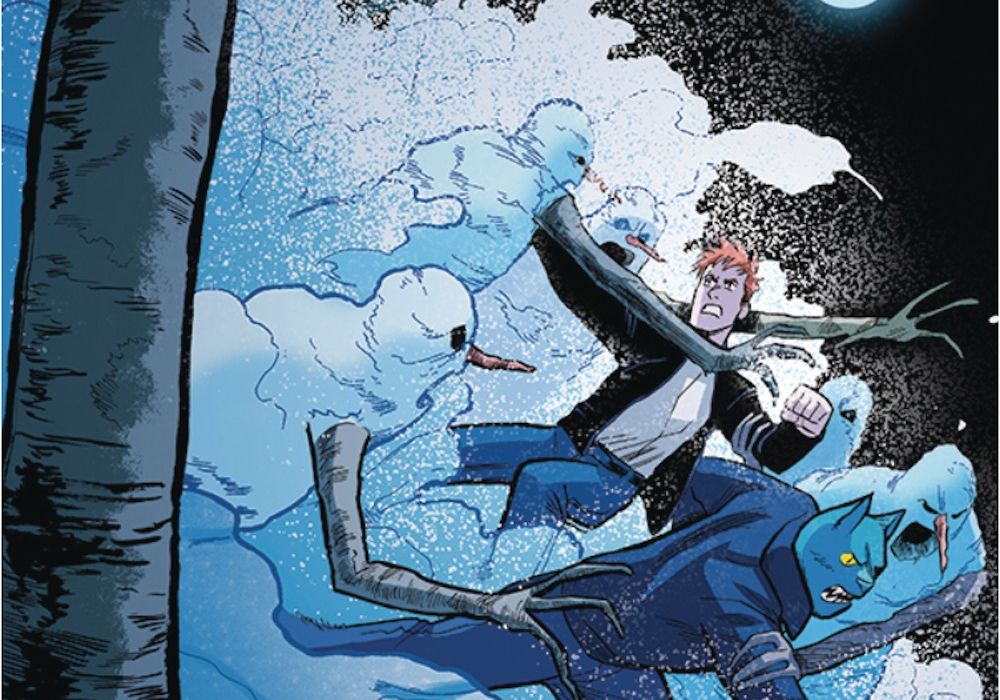 “Spencer & Locke 2” #3 takes us for a second spin inside Locke’s psyche, only this time he’s a little more in control – and hanging onto life by a thread. Warning: spoilers ahead. 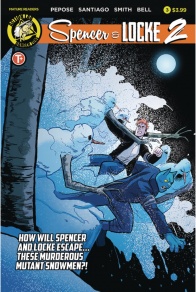 Hovering between life and death, Spencer and Locke must make the ultimate choice as they journey across a terrifying and otherworldly battlefield. Meanwhile, Roach Riley aims to paint the town red – that is, unless an unexpected hero has something to say about it!

“Spencer & Locke 2” #3 opens with Spencer (and Locke) close to death under the pile of rubble Roach Riley dropped on their heads at the end of our last issue. Spencer has some important life decisions to make, while Hero and Melinda Mercury follow their own paths out in the waking world. Issue #3 retraces some of the previous volume’s hallucinatory jumble from the perspective of a character who’s still dealing with his trauma but who also has quite a bit more on the line than he did previously.

Pepose and Santiago do great work on memory, trauma and survival in “Spencer & Locke,” and they do all this work through a sophisticated send-up of comics, and comic strips in particular. The whole book has been a love letter to the strip, and it’s continually impressive that the team can incorporate so many different characters and styles without breaking tension or verging on the ridiculous. Issue #3 features a Dick Tracy analogue and an homage to Miller’s Batman (among other things,) and Locke digs into his past and his future through a confrontation with his younger self. Pepose’s writing is fierce, tender and brilliant in this moment, and the team is not afraid to use a clear and concise visual metaphor to get its message across. Santiago chooses mostly white backgrounds to communicate the internal landscape, as most comic creators do, and it works nicely with Smith’s varied palette.

There’s also, you know, Nazi snowmen, which is a nice absurd and topical addition to the issue’s otherwise serious tone. If anything, there’s a little too much going on in this issue. Melinda Mercury continues to feel slightly superfluous. Her digging into Roach Riley’s past is useful as a plot device, but when there’s a lot to cover in a short amount of pages that perspective feels like it splits out the book a bit too much. Her presence, homage as it is to Lois Lane and all the other intrepid female reporters who’ve come before, is a bit too on the nose for the book’s pastiche because there’s not enough time to dig into her as a character. At least, not yet.

Santiago’s art impresses again with his take on the police commissioner, who’s a relatively familiar noir detective – albeit in red this time – and whose role in the book might’ve been cut brutally short by Roach Riley. Of particular note in that scene is the final panel, in which the art is framed by the sound effect of the gun. Santiago’s work gets more and more creative over time on this book, and it’s a joy to experience. Hero’s story is compelling not just because her perspective is a nice addition to the story, but because Santiago always makes sure to draw her in proportion to the big and scary world around her. Roach kneeling next to her at the end of that scene is a nice fatherly callback to the time Spencer specifically has not had to spend with her to date, and the backdrop of the city burning in the wake of his destruction amplifies the stakes and the more desperate tone of “Spencer & Locke 2” thus far.

Smith’s color palette continues to impress, with some nice accent pops and a particularly clever blue tinge to the Nazi snowmen for some visual interest and texturing when they crowd the screen. Locke’s stuffed-animal blue is a hard sell, and yet we manage to take him seriously despite his somewhat uniform and childlike color. It becomes comforting over time as the team intends, and adds a note of cool, noir seriousness to the book’s surreal landscape. Hero’s cape is a similarly cheerful color, despite her intention to have it be dark and mysterious, and all those explosions look particularly devastating against Hero in the foreground.

With multiple narrators and points of view in this issue, Bell has a lot of work to do to keep everything readable and concise. Hero’s font is nice and childlike without feeling too infantile, and Locke’s notepad narration styling continues to work nicely. That font does become a bit too difficult to read at times with everything happening on the page, but the consistency with the previous volume is nice and adds a specific rhythm and rigor to the book. Much as Locke orders his thoughts with brutal efficiency, so does the consistency here sell the veneer of control and give us a visual measure by which to proceed.

“Spencer & Locke” is a book that works because it’s earnest and because its delivery method is creative. That’s down to Pepose and Santiago’s synergy and the great work done by Smith and Bell to add clarity and control the pace of the action and some pretty sophisticated, upsetting emotional moments. “Spencer & Locke” does send-ups without undercutting its roots and deals frankly with trauma in an authentic way. There’s very little here that feels unearned, and in a book that’s trying to bring a city down around a somewhat unstable main character, that’s a very hard thing to pull off. Pepose, Santiago, Smith and Bell accomplish it very nicely, indeed.

Final Verdict: 8.0 – “Spencer & Locke 2” #3 sets a frantic pace but tempers the action with the emotional resonance we’ve come to expect from the series thus far.