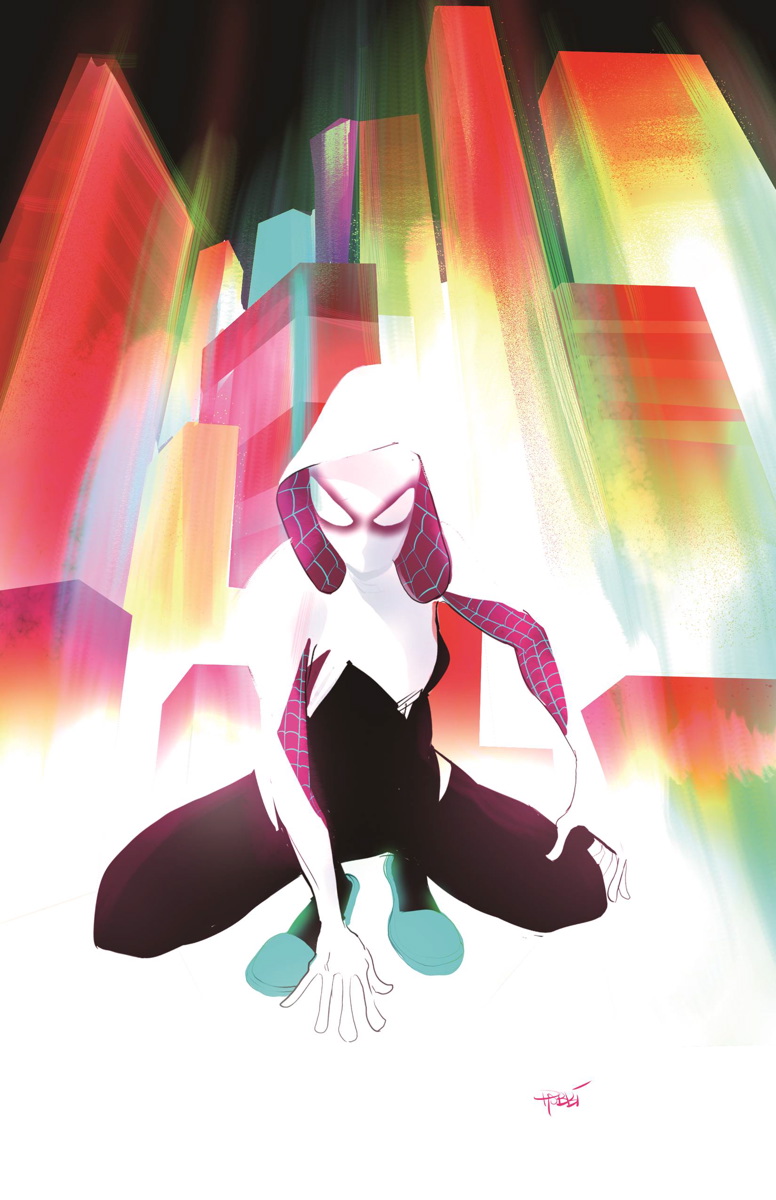 Spider-Gwen! Spider-Gwen! Can she swing? From a web? Yes she can! She’s a Gwen! Hey there! There goes the Spider-Gweeeeen!

And with that, check out our spoiler-free review below. 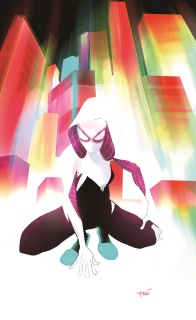 SPIDER-GWEN SPINS INTO HER OWN SERIES!
• BECAUSE YOU DEMANDED IT! The breakout hit of the biggest Spider-Event of the century is taking comic shops by storm this winter with her own new ongoing series – SPIDER-GWEN!
• Gwen Stacy is Spider-Woman, but you knew that already. What you DON’T know is what friends and foes are waiting for her in the aftermath of Spider-Verse!
• From the fan-favorite creative team that brought you Spider-Gwen’s origin story in EDGE OF SPIDER-VERSE, Jason Latour and Robbie Rodriguez!

Sometimes, the internet is really good.

In case you haven’t been on the tumblrs, the twitters, or the multiversity comicses, “Spider-Verse” was an event that hyped a lot of people (Myself included. Myself especially included.) with a dozen or so innovative interpretations of Spider-Man. There was a cool punk rock one. An EC Horror comics one. Gerard Way wrote Neon Genesis Evangelion fan fiction. It was a great time. But the most popular Spidey to come out of “Spider-Verse” had nothing to do with Peter. In “Edge of Spider-Verse” #2, Jason Latour and Robbie Rodriguez introduced the internet to Gwen Stacy, or rather a Gwen Stacy who was bitten by the spider that bit Peter in the 616, somehow made the coolest costume of the 2010s by herself, and also performed in a rock band called The Mary Janes who had their own song. Naturally, the internet loved it. So much so that it’s only five months later and we’re already reading “Spider-Gwen” #1.

There are a lot of reasons why Spider-Gwen was popular (strong female character, killer costume design, the universal appeal of turning Taylor Swift into a superhero), but one of the reasons that struck out to me was just how lived in Gwen’s universe feels. Her debut in “Edge of Spider-Verse” #2 wasn’t an origin story, it was like the continuation of one to two year long storyline. After Gwen gained her powers and became Spider-Woman, Peter Parker became upset that he wasn’t able to defend himself. Eventually, his frail man ego led to him inventing a super-power formula which just turned him into the Lizard and cost his life in a fight with Gwen, the details of which are still pretty vague. Now, Spider-Woman has to deal with her ever turbulent personal life, a rampantly growing crime lord, and a city that can’t tell whether she’s a threat or menace.

If that sounds too similar to Peter Parker’s adventures in the 616 (besides the him, uh, dying part) then don’t worry. Spider-Gwen’s universe is radically different from the main Marvel universe. Characters like Ben Grimm are now surly NYPD officers and traditional foes like J. Jonah Jameson are nothing to Spider-Gwen compared to the police captain assigned to track her down. By changing up the cast and dynamic of this New York, Rodriguez and Latour have created an entirely new universe to explore Gwen in, ensuring that she’s not retreading anyone else’s story lines.

That said, “Spider-Gwen”‘s uniqueness doesn’t hinge on whether or not Daredevil is a good guy. No, Rodriguez’s art brings with it an aesthetic that is vastly different from your typical Spidey adventure. The art is kinetic and vibrant, fitting for a high school aged girl like Gwen. Rodriguez also seems to be indulging in the trend of “cosplayable characters” with his designs for Gwen, obviously, but even minor characters like the Bodega Bandit. Seriously, there’s a Hamburglar knock-off who gets taken down in one page and somehow has more style than your average super villain. You should expect to see him at your local con. Rodriguez isn’t all cosplay and fashion, though. His use of dynamic perspectives ensures that “Spider-Gwen” is a comic in perpetual and fluid motion, even when the characters are sitting around and talking rock ‘n’ Roll politics.

Of course, it would be a shame to talk about the art in “Spider-Gwen” without mentioning colorist and letterer Rico Renzi and Clayton Cowles. Rico’s purple-tinted New York is utterly unlike any other depiction of the city in comics right now. It carries with it a sense of otherworldliness, suitable for a parallel Earth story, and even more suitable for a comic that looks like a music video at times. And what’s just as interesting as Renzi’s coloring is Cowles’s lettering. Cowles has long been one of the strongest letterers in the game but his work in “Spider-Gwen” is really top notch. Sound effects in comics are really a lost art that Cowles has reclaimed, especially in the major fight scenes. The onomatopoeias crack with an electricity that sell the impact of the brawls as much as Rodriguez’s art does.

Final Verdict: 8.8 – From top to bottom, the creators of “Spider-Gwen” #1 are all working at the top of their games and with one of the most exciting character finds of 2014. If you’re looking for a classic Spidey story that simultaneously feels brand new and hits all the notes that have made Spidey so resonant, than “Spider-Gwen” #1 is for you.