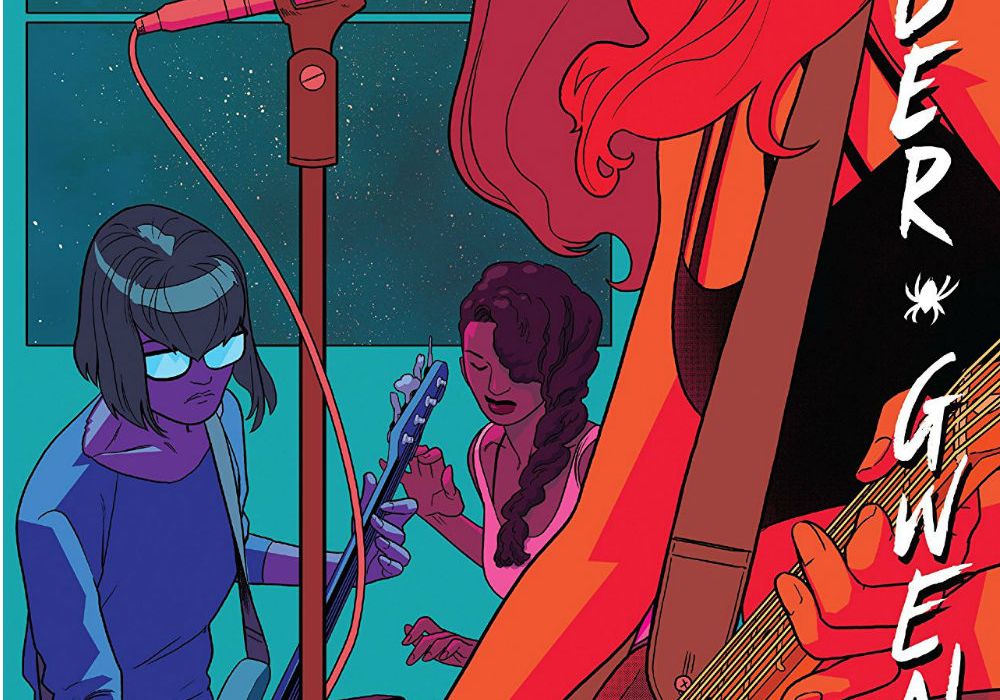 Hark, what’s that off in the distance? Is it a bird? Is it a plane? No, it’s a “Spider-Gwen” issue with almost no Spider-Gwen. And for once, this time that is a blessing. Spoilers ahead for, plot? I guess? Don’t worry. This month is basically a one-shot. 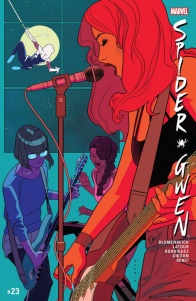 For the past few months, I’ve been pretty hard on “Spider-Gwen.” Predators hasn’t been its strongest arc, with all the small problems of the series all coming together to just undercut any of the tension that was necessary to make it work. It was dour and left behind the dynamic with the band that made the series work so well early on.

Because of this, I was very psyched for this issue. Well, to be more specific, I was very excited to see the backup story composed by Hannah Blumenreich, of Cowboy Bebop spidey-zine fame. And then the issue came out and instead of delivering what I expected – a lackluster end to the Gwenom set up and a rocking backup about the Mary Janes – we got exactly what this series needed to get back on track, or at least keep readers like me on board.

Let’s break it down. We open the issue, not on Gwen and the ominous shadow of Venom towering over her, but instead on Earth-8, with a strange version of Family Feud, with clown Steve Harvey, multiple Bodega Bandits and the Spider-Gwen family, The Amazing Eight. It’s a surreal image that helps to set the tone for the issue, letting us know that, despite the solicit and the previously on… segment, this is going to be a much lighter issue.

This is only reinforced by Utau (is every Watcher named some variation on Uatu?) watching Earth-8 on his TV, looking exceptionally bored. You can even feel the Doritos crumbs that would be floating around in the air of the panel; this is pure speculation but Rodriguez’s panels feel so alive that it seems as if you can infer what being there would feel like. Rodriguez’s facials expressions are also very strong this week, filled with life and an elasticity that lets even the normally stone faced Watcher run a gambit of emotions as he’s confronted about his lack of work.

Utau is also our stand in, sitting bored, expressing his displeasure with the tonal shift the series has gone through and missing the levity that, now, Earth-8 is able to provide. He’s disgruntled and having him snark at the other watchers who berate him makes for some great comedic moments. By framing the issue this way, instead of just dropping us into the lives of the Mary Janes, we get this meta-commentary by the creators that gives us a less jarring transition away from Gwen and allows for issue #24 to open well beyond the point where issue #22 ended.

But enough about the laziest Watcher in the multi-verse, let’s talk about Blumenreich’s Mary Janes. The last time we truly saw them all together, we didn’t get to see much of them outside of the context of Gwen and her ongoing problems. This issue we get the full adventures of a band missing its flakiest member. Right from the get go, Blumenreich establishes the personalities of each of the band members beyond just, Mary Jane is 616 Peter Parker levels of selfish and the other members are….there?

Needless to say, as much as I loved the band, their characterization prior to this always took a backseat to Gwen and, to a lesser extent, Mary Jane. They were the larger personalities and as such, took over every issue they were in. Not so this time. MJ, Glory, and Betty all feel distinct, with their own ways to sitting, walking, talking. They’re not just pieces to be posed to create drama for Gwen, instead they’re allowed to breathe and be themselves. Because of this, a majority of the conflict of this issue is character driven, with Glory’s insecurities and MJ’s externally visible ignorance to the feelings of other being the driving force behind the emotional moments of this issue.

Blumenreich’s (read Blumenreich and Gibson’s) art is integral to this, working in contrast to the more ethereal, bombastic art of Rodriguez, giving a more grounded feel to the comic. It’s just band mates trying to play a show and all the obstacles that they encounter instead of some planet shattering, Kingpin plot. However, when we do get some action, it feels weighty and satisfying (especially because of the dude who gets his butt handed to him).

There is also a distinct contrast of the way Blumenreich does her paneling compared to Rodriguez, which helps give it a different feel. Rodriguez’ panels, at least in this issue, are all wide-screen, stretching from one edge of the page to the other, while Blumenthal’s are gridded, broken up into neat rectangles and square. This is only broken during the aforementioned fight scene, where the panels open up to follow the action, sloping with Mary’s punch, and for the concert page, with each band member getting a jagged panel, overlaid on each other, visually representing the feel of their music.

Her paneling, while not necessarily being as varied as some other comic artists, makes this issue work because of its simplicity. I mentioned before that this issue is funny and much of that has to do with the paneling. Early on in the issue, MJ and Glory are discussing whether or not to do the show without Gwen and with Glory on drums. Betty (who we haven’t seen at all in the issue before this) chimes in off panel. Then, in the next panel, we just get a shot of Betty sitting crosslegged in a bean-bag chair, the other two staring at her before, in the next panel, we get a close up of Betty’s face as Glory asks her how long she’s been sitting there. Betty just replies, “Days,” with a nonchalant expression on her face. It’s a dry joke that, without a proper handling of framing, wouldn’t have worked.

That empty panel let us focus in on Betty (acting as a good introduction to her character here as well) and set up the joke that neither MJ nor Glory even noticed that she was there. There are so many examples of this that I could be here forever. It’s readily apparent that, despite only having two professional credits to her name at the moment, Blumenreich, has a firm grasp on how to use the medium to visually craft comedy and bolster it with natural, funny dialogue.
However, this brings me to my final point and it’s something that has bothered me about Spider-Gwen from the start – Backgrounds, the bane of any monthly comic artist. I believe that everyone has a different opinion on this but for me, a good use of background can make or break a comic. The backgrounds act as the setting, the dressing and a lack of them can be very jarring. This unfortunately happens here, with a salmon colored background at the beginning and a bird’s egg blue background near the end. It’s supposed to be the color of the walls behind the characters but instead of feeling like a wall, it just feels like a rectangle of color.

This by no means ruined the comic for me but it was distracting, especially when the characters were having a conversation that acted as the resolution to the arc of the issue. This will not be a problem for everyone though and is, unfortunately, just something that happens due to the rigors of a monthly book. I’d much rather see the effort go into crafting the characters, like we see here, than into adding texture to a background.

Either way, this issue was one that made me glad that I stuck with “Spider-Gwen.” It’s funny, heartfelt, and now I hope that at some point we can get a constant back-up story with Hannah Blumenreich and the Mary Janes. Or maybe, if the rumors are true and Rodriguez is leaving after Gwenom, we can get Blumenreich to do the main story. I’d love to see that.

Final Verdict: 7.9 – A return to form for “Spider-Gwen” and an issue that, even if you have no knowledge of the series prior, you should pick up, especially if, like me, you are a fan of Giant Days. Plus, a stellar cover.