Never have I seen a comic character catch on quite like Spider-Gwen. Before she even debuted in the pages of ‘Spider-Verse’ people fell in love. Now she’s had an ongoing series, a prominent role in a cartoon show, and is about to debut on the big screen. All of this in as little as four years! The thing about Gwen though, is that she is very much the product of the guys who created her. As she expands out into other series, it looks like Gwen has got to go through some growing pains. 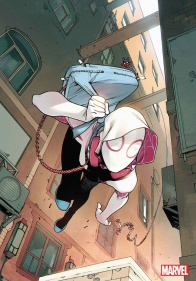 A SPIDER-GEDDON TIE IN! What? You thought we were done with Gwen Stacy after the first two landmark volumes of her series?! GET OUTTA HERE. It’s a whole new spin on Gwen and her world of Earth-65, brought to you by none other than SEANAN MCGUIRE & ROSI KÄMPE! We pick up with Gwen right where we left her – fighting crime through her home reality, unaware that it sits on the precipice of interdimensional calamity! Someone’s gonna be late to band practice…

Bearing the somewhat cumbersome name “Spider-Gwen: Ghost-Spider” (actually “Spider-Gwen: Ghost-Spider” #1 ‘Spider-Geddon Part I: Uncharted’), this first issue was always going to be a bit of a hard sell. It’s coming off of the wildly loved series by Jason Latour and Robbi Rodriguez, who gave the book its unmistakable style. Even though Gwen first debuted in the pages of a massive Spider-crossover, launching her new series in the same way seems like tempting fate, and it shows.

Because for one thing, I didn’t fully understand what was happening in this issue until I went and read “Spider-Geddon” #2. Never a good sign. The issue starts with Gwen’s status quo, though it leaves a bit out. A lapsed reader will be reminded that Gwen is the hero of Earth-65, a world where Peter Parker is dead. Gwen did some time in jail, but she’s back to protecting her city. The world now knows that it is Gwen Stacy under the mask, and straight up just call her “Spider Gwen” to her face (mask, whatever). Gwen doesn’t like this very much.

There’s a moment early in the issue where things really start to come together. Gwen sees her pal Harry Osborn and finagles him into buying her a burger. While not overtly romantic, the scene really captures that wonderful Spidey feeling of balancing life and hero stuff. When Gwen is called away to go be a spider, you can’t help but smile. It’s the same thing that Peter did to her in the 60s comics; now she’s doing it to Harry.

Of course, the reason she’s being called away is not immediately clear. It turns out to be a summon from Spider-Ham, the porcine Peter Porker of Earth-8311. It seems that the script called for Gwen to notice Ham posing on the building across the street, but unless you squint, you’d never notice. Until the reveal a page later, it’s not even clear what the blue and red shape is supposed to be. It’s not great storytelling from Rosi Kämpe, who nonetheless manages some pretty great art throughout the issue. She has the impossible task of making Rodriguez’s art her own, and it seems to be holding her back. Kämpe has a style all her own, but trying to fit into the Rodriguez box is an added dimension that seems to distract from the otherwise stylish action, pratfalls, and teen antics.

That’s not the only storytelling weirdness though. Around the halfway point, Ham tells Gwen that she’s needed over in “Spider-Geddon.” There’s a quick and dirty splash page, sort of summing up the events of “Spider-Geddon” #1 (and half of #2 as it turns out), but Gwen’s… memory? Seems to be hazy? Something is happening, it’s not clear, and suddenly there’s a whole new inter-dimensional conflict, involving alternate versions of familiar faces. Great stuff for a “Spider-Gwen” comic. But telling the story like this? Baffling.

I get it. It’s hard to work in the confines of a big corporate crossover. You got a lot of plots to juggle and with limited pages, why would you want to tell the same story that’s going on in another series. But something really got lost along the way in this issue. Instead of showing another side of the conflict in a way that deepens Gwen’s involvement in the main series, Seanan McGuire decided to tell the story she wanted to tell. And it seems like a really good story. But there’s all this other business in the middle, and it can’t decide which parts the reader wants to know.

That goes for the little things too. One panel had me wondering what was wrong with Gwen’s spider sense. Then a line in “Spider-Geddon” #2 reminded me that oh yeah, Gwen’s suit is now made of a symbiote. Maybe McGuire thought that readers would pick up on it, or that they would read “Spider-Geddon” #2 first, but some of us aren’t here for that. Some of us just really love Gwen. I know I walked around confused for a day until I picked up the other comic. I can’t imagine how a new or lapsed reader would fare.

At the end of the day though, I really do love Gwen. She’s my favorite of the new generation of Spider heroes. I’ve heard McGuire talk superhero comics, and I know she’s deeply thoughtful about superhero storytelling. I’ve seen Kämpe’s art in an “X-Men” annual and in “Genius” over at Image. Kämpe is an honest talent. Sometimes it takes a team a little bit to get a groove going. Hell, it happened with Dennis Hopeless on “Spider-Woman” last time we had a Spider-crossover, and I ended up in love with that series. But until that moment, “Spider-Gwen: Ghost-Spider” #1 ‘Spider-Geddon Part I: Uncharted’ feels like less than the sum of its parts.

Final Verdict: 6.6 – A smart writer, a talented artist, and a great character still need some time to figure things out.