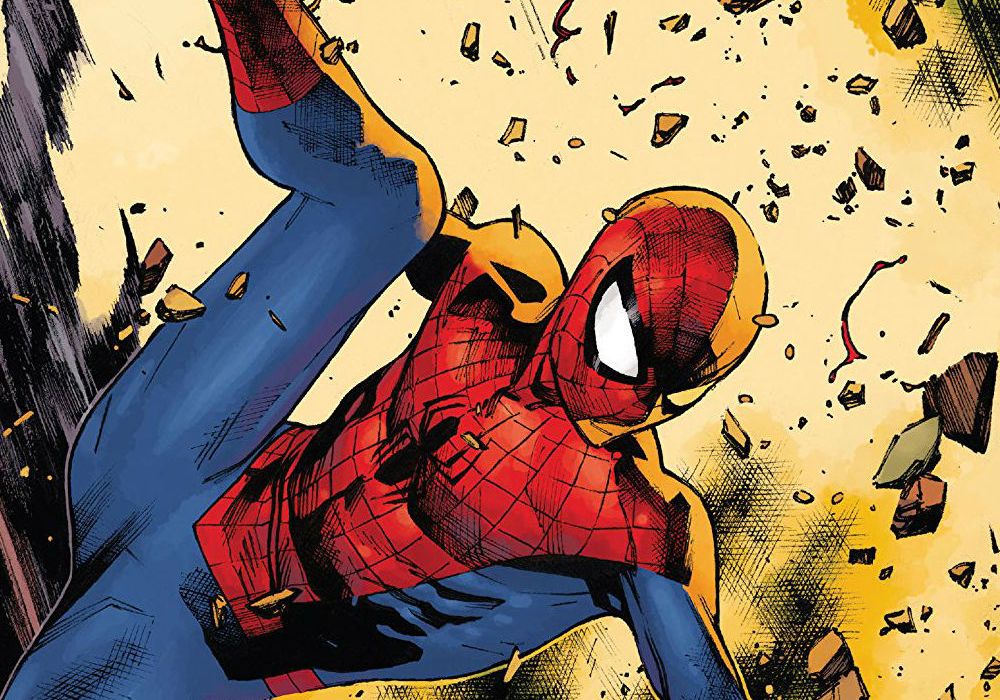 I don’t know about you, but I was pretty interested to read J.J. Abrams’s “Spider-Man”. He’s such a high-profile talent and in the past, I’ve really liked what he’s done with other iconic properties like Star Trek and Star Wars. I mean, I wasn’t even into the Star Trek franchise all that much so just imagine what he could do with Marvel’s beloved web-slinger. One would think this mini-series would be a home run. That might be too hard to tell just two issues in but still, how’s it going so far? 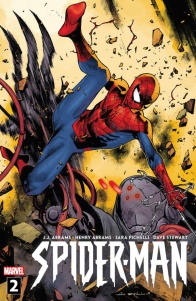 Written by J.J. Abrams & Henry Abrams
Illustrated by Sara Pichelli
Lettered by VC’s Joe Caramagna
Colored by Dave Stewart
The most anticipated comic event of the year continues from J.J. Abrams (Star Wars, Star Trek, Lost, Alias), Henry Abrams and Sara Pichelli (SPIDER-MAN, GUARDIANS OF THE GALAXY)! Peter and Mary Jane have had their first run in with the new villain Cadaverous and it did not go well. What horrific impact from this horrific villain will scar them the worst?!

Well, it’s going…alright, I guess? There are bits that I like but I feel indifferent to a lot of it. That might be on me though. Maybe my expectations were unfairly set too high. I certainly expected a more interesting villain. Cadaverous is a one-note villain, right down to the bland monologues. Killing Mary Jane is his one claim to fame but beyond that it’s always something something, we’ll be back! Yada yada, bring me the boy! You get it. He isn’t very scary, doesn’t feel all that threatening. What is Spider-Man ‘the key’ to exactly? In all honesty, I don’t really care.

They’re not as bad as the antagonist, but the protagonists of “Spider-Man” #2 could also be more interesting. The original Spider-Man is off across the world, not taking care of his son, because he’s saddened by the death of Mary Jane. Let the record show, it’s pretty messed up how Peter isn’t there for his son. Aunt May makes excuses for her nephew and explains Peter’s reasoning but…he still has a kid to raise. With great power comes great responsibility. You would think Peter would know better. It’s been twelve years, his grief is definitely not a good enough excuse at this point.

Aside from the mild novelty of his parentage, the main character, Ben, is just an average, ordinary kid. He’s a little awkward like his father but doesn’t really seem to have that distinct of a personality yet. Actually, he seems like a watered-down version of Peter in some ways. For example, he lives with his Aunt May and already has a femme fatale girl in his life, cat ears and all. The most interesting thing about him is his anger over his father’s absence. Their confrontation at the end of this comic could prove to be pretty interesting. Still, while his anger is completely justified, his actions edged towards annoying at times. Why burn the Spider-Man costume on the grill? Just put it back in the attic, dude. You’re just being dramatic.

Ben is at his best when he’s with his new friend, Faye Ito. Faye is the breakout star of this series, a likable an engaging character who, unlike the new Spidey, actually wants to be a hero. It would be cool if she somehow made it over to main continuity. She’s full of youthful energy and seems like she has it all figured out without being condescending or coming off as a know-it-all. Faye is so self-assured and confident that she shows up to Ben’s house dressed in full costume. Though it could have been communicated a bit more effectively, I also liked her message that anyone could be a hero. It’s a variation on the theme from Into the Spider-Verse.

The highlight of “Spider-Man” #2 is the artwork. The book does look great, that much is for sure. Sara Pichelli is basically Spider-Man royalty as the co-creator of Miles Morales and is a remarkable talent. While Cadaverous isn’t all that interesting, his design is certainly unique. Faye Ito’s design is interesting as well, both in and out of her costume. As a civilian, Faye constantly has paint splatters and drips all over her body and clothes. It really speaks to her carefree personality that she’s not bothered by the mess. Her costume is playful but practical, looks good and homemade at the same time. You know, something a high-schooler could reasonably put together.

As mentioned before, Ben doesn’t have many defining characteristics outside of his awkwardness, but Pichelli helps to communicate that trait effectively. Ben’s ears are just a bit too big and while he seems to be fairly tall, he’s pretty lanky. There’s an amusing panel in particular with Ben texting upside down, the straps of his tee shirt dangling loose. The main character wears his father’s costume for a good portion of this comic but you can tell who it is just by his body language. If you look closely at his costume, you can tell that the costume doesn’t quite fit just yet. Material bunches up a bit at the neck or the ankles. He’s subject to some slapstick humor as he finds his way. Pichelli draws Ben with very expressive eyes. Through the Spider-Man mask we can see his confusion, surprise and panic as he goes out in costume for the first time. Here’s hoping the story proves more interesting when he goes out for a second time.

Final Verdict: 6.0 – Not the worst but not the best stop on our trip through the Spider-Verse.