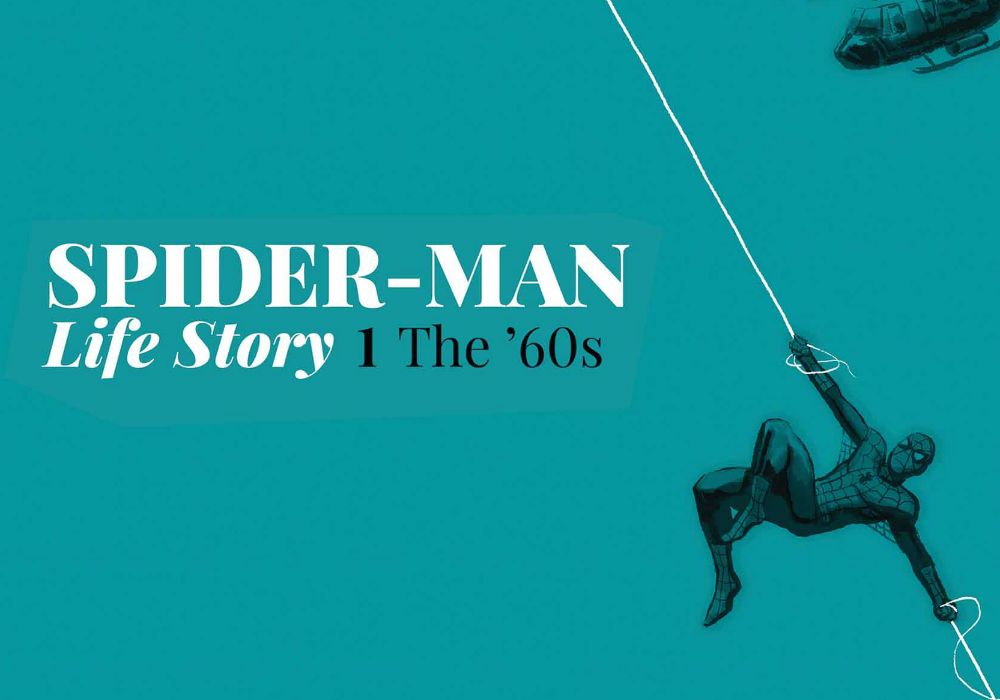 At first I wasn’t blown away by “Spider-Man: Life Story” #1. It’s an undeniably good comic, created by a journeyman veteran and a recent superstar. Then I got to the last page and suddenly, this entire venture clicked for me. “Life Story” isn’t just a good comic, the miniseries has the potential to be an all-time classic. There’s no way to discuss it without getting into spoilers. If you don’t mind, great. If you’d rather be surprised as I was, skip to the last paragraph. This is a fantastic comic with a lot to say. 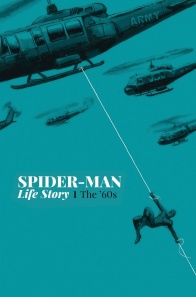 In 1962, in AMAZING FANTASY #15, 15-year-old Peter Parker was bitten by a radioactive spider and became the Amazing Spider-Man! Fifty-seven years have passed in the real world since that event — so what would have happened if the same amount of time passed for Peter as well? A special high-end limited series that’s a part of the celebration of Marvel’s 80th anniversary, SPIDER-MAN: LIFE STORY combines the talents of Chip Zdarsky (SPECTACULAR SPIDER-MAN, MARVEL 2-IN-ONE) and Mark Bagley (AMAZING SPIDER-MAN, ULTIMATE SPIDER-MAN) to tell the entire history of Spider-Man from beginning to end, set against the key events of the decades through which he lived! In this first oversized issue, when Flash Thompson is drafted to serve during the Vietnam War, Spidey must weigh the question of where his responsibility truly lies!

“Spider-Man: Life Story” pulls the same trick as “Marvels” and “Justice League: New Frontier.” It tells the familiar superhero story but sets it in the real world, and has time unfold in a real way. Peter Parker was bitten by a radioactive spider in the middle of 1962 when he was fifteen years old. The issue opens in 1966 and things are less than groovy as the Vietnam War is heating up.

On page three I said to myself, “it’s nice that they found an artist who can draw just like Mark Bagley,” before I looked back at the credits and remembered oh yeah, they got Mark Bagley to draw this thing! Bagley has been drawing Spider-Man for over 30 years, including the historic “Ultimate Spider-Man” run with Brian Michael Bendis, the same run that brought me back into comics. Bagley’s way of drawing Peter Parker, Gwen Stacy, and Norman Osborn is totally familiar and comforting.

But maybe too familiar! It’s great to have such a definitive artist working on his signature characters but this is supposed to be a different take. Bagley’s style is timeless, and this is a comic that’s supposed to be firmly rooted in the era. The clothes, the ads, the TVs in the background, remind you that this is a different time, but I found myself questioning if Bagley was really the right choice for this miniseries. We’ll come back to that.

Chip Zdarsky came onto the scene as comics’ new funnyman, and no matter how many times he works against type, he still surprises me. This isn’t a parody take on Spider-Man, it’s a very traditional story. You’ve got sickly Aunt May, and greedy J. Jonah Jameson, and long suffering Gwen Stacy. You’ve also got Green Goblin, and the big dramatic moment happens when Norman reveals himself to Peter as the Goblin and reveals that he knows Peter’s secret identity. That too is really traditional though! Sure we get scenes of Peter flirting with Gwen by saying things like “I’m a fab and you’re a fox” with is really groovy, but none of that is mind-blowing.

The real hook? Flash Thompson is going off to war. The Vietnam War. He was inspired by his hero Spider-Man to stand up and do the right thing. This is causing the neurotic Peter Parker to spiral into a deep well of self loathing. Should he enlist? Should Spider-Man go to war? How would that even work? He talks this out with a very well-written Captain America who’s shaken up from spending two decades (ha!) on ice. He disappeared during one war, woke up to a very different one and he’s still figuring things out. The one thing he’s sure about is that Spider-Man is a good kid, doing a lot of good by protecting people on the homefront. Cap’s gonna go to ‘Nam, but Spider-Man should follow his heart.

This feels, for lack of a better word, substantive. It’s not just Spider-Man swinging through a city filled with flower children, or meeting John F. Kennedy or something, it’s using a central experience of the era and the central themes of “Spider-Man” to tell, well, a life story. Then the freaking epilogue happens.

One year later, American soldiers are competing with Iron Man for “the glory” of winning battles, but you know what the war was like. We have the benefit of hindsight, we know that a lot of messed up stuff happened in the Vietnam war. The soldiers are about to shoot what looks like civilians but right before they do, they’re stopped. By the “traitorous” Captain America. Holy. Crap.

This isn’t the first time someone has asked the question “Captain America, but what if he was in Vietnam?” Jason Aaron did a really interesting take on the theme in “Ultimate Comics Captain America.” But seeing Cap go rogue in Vietnam really gives the issue a thematic throughline, and really establishes the mission statement of the series. As a good first issue should!

Peter Parker is supposed to be an everyman, dealing with the relatable problems we all have to face. If you tell a Spider-Man story about a particular time or place, Spidey is going to have to deal with those issues. His central morality is what carries him through, and an interesting story will make that a challenge. I can’t think of any challenge thornier than being a socially conscious superhuman in the era of ‘Nam. But we’ve got at least five more decades to go, so I’m sure we’ll find other ways to challenge our favorite good-hearted superhero.

I came in to “Spider-Man: Life Story” expecting a high quality issue. After all, Zdarsky and Bagley are all-time greats with a lot to say about the character. When the story seemed to be conventional, I shrugged and prepared myself to enjoy a well crafted extra little Spidey story. But the twists and turns here come not from plot or character subversion- they’re all about theme. This is a fabulous issue, and I would not be surprised if “Life Story” became an all-time classic, constantly in print, read and re-read for years to come.

Final Verdict: 9.2 – One of the most thematically rich Spidey stories, not to mention Marvel stories, in years.