Welcome to the seventies! We’ve got disco and oversized technology, but that’s the least of Spider-Man’s worries in this issue… 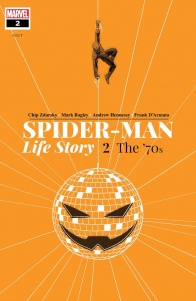 Chip Zdarsky’s exploration of the life of Peter Parker revels in its novel twists on the Spider-Man lore. There are a handful of moments in this issue alone that offer genuine surprises, often packing an emotional punch to boot. While the sheer volume of content featuring the web-slinger can make it tough for individual stories to stand out, “Spider-Man: Life Story” #2 does just that with its period setting and well-crafted story. With each issue taking place in a different decade, this series could very easily have been a disjointed read. Fortunately, Zdarsky has avoided that pitfall, carrying forward plot threads from the first issue while effectively making narrative use of the jump in time.

This installment takes place in the 1970s, with Peter Parker and Gwen Stacey an established and happy couple, the former working alongside genius scientist Reed Richards. While their relationship is strong, the era is a time of struggle as the unpopular Vietnam War rages on. It’s a conflict which has affected the couple personally, not to mention hurting the United States as a nation, prompting Parker to contemplate whether he made the right choice in not enlisting. All the while, Harry Osborn is working to keep Oscorp afloat as his father spends time behind bars, the pressure of his conviction clearly taking a toll.

Zdarsky juggles all these plot threads very well, keeping the focus on the relationships at their core. This issue alone contains memorable scenes with a number of classic pairings, from Harry and Norman to Peter and Gwen. These interactions are relatively brief, perhaps benefitting from the pre-existing knowledge that most readers will have of these characters, but their conciseness also helps keep the pacing brisk. Far from just recycling the familiar character dynamics, Zdarsky has plenty of new elements to add to the mix. One heated exchange between Parker and Richards regarding the ethics behind his hoarded inventions is particularly interesting, showing an inconsistency in the world view of the two characters that begs greater exploration.

The story these characters fall into isn’t quite as strong. The narrative blends elements from iconic spidey tales to create something new and achieves some success, building up a lot of great tension but ultimately falling a little short in the payoff. The way this storyline wraps up just feels a little rushed, leaving the ideas in its climax a tad half-baked and fan-servicey. It’s a plot that feels like a means to an end more than anything else, breaking Parker down to his lowest point, meaning there really is nowhere to go but up in the issues to come. There are also a few rough spots of dialogue where things veer ever so slightly into melodramatic territory, most notably during a confrontation with Mary Jane about halfway through the issue.

The art in this book is provided by Spider-Man veteran Mark Bagley, meaning it should be no surprise that it looks superb. After years spent penciling “Ultimate Spider-Man” with Brian Michael Bendis, he has no trouble throwing the acrobatic wallcrawler into action. So effortless is his rendering of the eponymous character, that the eye is drawn to smaller background details. For example, the laboratories of Reed Richards and Scipro-Genesis which are densely packed with bulky technology and chrome plating. It’s a very seventies notion of what the world of tomorrow might look like, and when paired with panels reminiscent of Spider-Man comics from the time, there’s an unmistakable sense of era to this book.

The colors by Frank D’Armata are strikingly subdued. While that may sound like a contradiction, the muted palette actually plays a huge role in building this issue’s thematic identity. The absence of bright colors serves to allude quite ominously to the personal trauma Parker has to come, while also effectively reflecting the somber national mood of the moment caused by the destructive war in Vietnam. The only exception to this is one scene set in a nightclub, but even the sultry lighting of that environment takes on an antagonistic feel as it progresses.

“Spider-Man: Life Story” is shaping up to be a superb out-of-continuity tale for fans of the character. Those who get a kick out of seeing classic stories reinvented will surely enjoy what Zdarsky has to offer, particularly as the character beats are strong enough to overcome any shortcomings in the narrative. This reviewer has often found it difficult to sympathize with Peter Parker and his rotten luck, but by placing him in the tumultuous seventies and putting him on a collision course with genuine moral quandaries, this series has a more compelling take on the character than any other book currently on store shelves. The art is also a big selling point, with spidey veteran Bagley as strong as ever, and the moody colors establishing its troubled period setting.

Final Verdict: 8.3 – Chip Zdarsky’s historical look at the life and times of Peter Parker deserves a spot on your pull list.