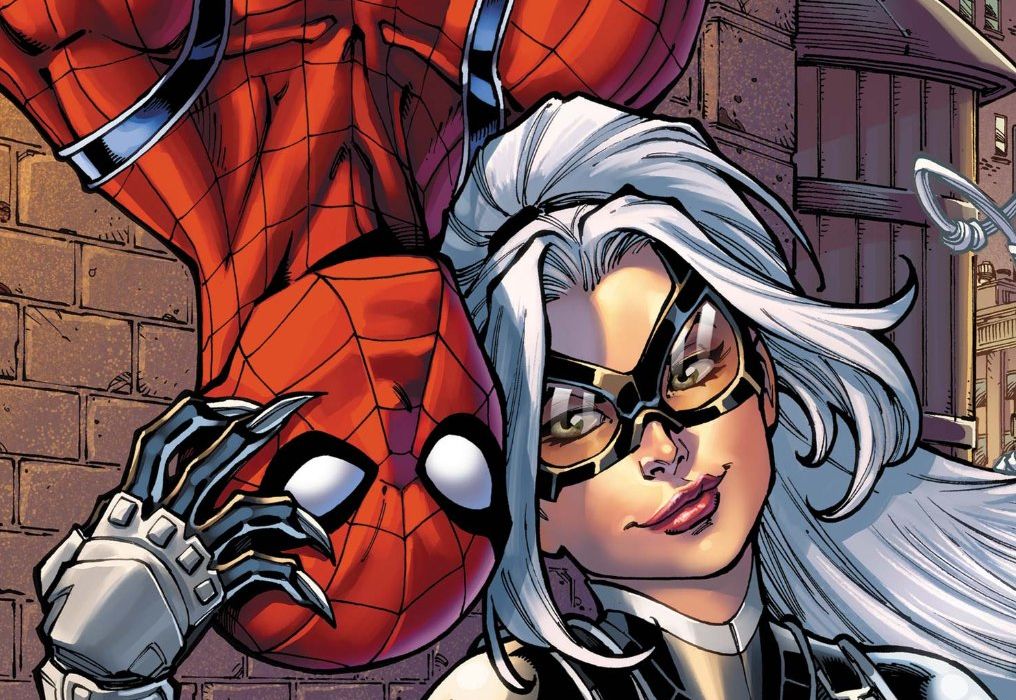 Marvel adds a new miniseries to their Gamerverse imprint with a new chapter in the version of Spider-Man seen in the hit Playstation 4 video game. Mild Spoilers Ahead 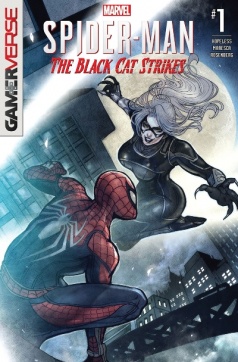 As Peter Parker, your friendly neighborhood Spider-Man begins trying to re-start his relationship with long time love Mary Jane Watson, criminal underworld leader Hammerhead is looking to up his street cred and power by filling the void left by the Kingpin, Wilson Fisk. Spidey heads to the Manhattan Museum of Contemporary Art to stop a heist based on intel from MJ.

The issue opens with Spider-Man attempting to stop the heist in typical energetic and acrobatic fashion, quickly dispatching the slew of thugs looking to steal a specific painting. Just as things seem to be turning in our hero’s favor, Felicia Hardy – The Black Cat shows up to not just steal the painting, but destroy it to get her hands on a jump drive hidden within.

Sliding into frame in a new costume, that’s even less cat themed than her previous duds, she takes the time to throw flirtatious quips and comment on Spidey’s own new costume while achieving her goal. In true Black Cat fashion, she scratches a loving message into the bulletproof glass keeping her safe from arrest and leaps to freedom, her mission complete. It’s at this point that the issue jumps back in time with Peter recounting the time her first met Felicia (Reminder: This is within the ps4 game universe).

The story picks up with Peter and MJ having been broken up for a few weeks and to keep his mind off his unhappiness Peter decides to be Spider-Man as often as possible. He was on a mission to prove to the world that Wilson Fisk was, in fact, The Kingpin of Crime, but once arriving as Fisk’s penthouse to gather evidence, he came across The Black Cat already raiding the joint. Shortly after, Fisk rushes in, clad in only a bath towel, determined to kill the intruder as Spidey watches from the shadows.

The rest of the issue moves at breakneck speed giving us more insight into Peter and Felicia’s relationship, both romantic and superhero vs. anti-hero. It’s a slam-bang hell of a fun time that ends up being both somewhat predictable and surprising all at once. For long time “Spider-Man”/Marvel fans, there isn’t anything terribly new here in terms of story, but as it is set within the video game version’s continuity there are some narrative changes to keep things fresh. Hallum does a great job capturing the characters’s voices giving everyone a timeless feel by never straying from traditional Spidey fare, and without feeling stuck in the past or trying to hard to modernize it all.

Overall this issue has a solid script that is never boring and will keep readers engaged straight through. There are some very mild spoilers for events in the game so if you haven’t played it and are particularly sensitive to learning details about some of the plot threads you may want to skip this. However, it is still a really enjoyable read whether or not you are acquainted with this Spider-Man universe. It is a a lot of fun to see how Peter interacts with both Felicia and MJ as they strike such a different chord in his personality. And there are a few times we see him responding to the two of them at the same time without either woman knowing about it.

Another great facet of this issue is the dual timelines we get to see. Jumping from the aesthetic of the game with Spider-Man’s new suit and a few other game specific details, to the classic look is great to see. It’s comforting, and for sure what the creative team was going for. Here’s a blend of new and old, enjoy!

Luca Maresca’s artwork is subtly great. It mostly plays it safe as it is a Marvel book showcasing its most (arguably) famous hero, and the story is pretty light thematically speaking, so one shouldn’t expect something genre shattering. That said, it is real pretty to look at. The energy level is just as high as the script and while I wouldn’t put it on my AAAARRRRRRTTTTT list of 2020 I have nothing bad to say about it. Which leads me to…

Rachelle Rosenberg’s coloring! Astounding as always! While she gives the entire issue her signature gloss and beauty, her work really stands out when we get to the flashback story. It’s classic Spider-Man and it is rad. Her work truly elevates this issue from being just another looked over Marvel comic – specifically a video game tie-in. This could have been handed over to someone cutting their teeth in the comics industry, but with a nicely planned story and well drawn art, having one of the best colorists today bring some of that gravitas to it is exactly what this premiere needed.

“Spider-Man: The Black Cat Strikes” #1 is the start of what could be a thoroughly exciting miniseries. It captures both the high-flying lighter antics with the fun side of Spidey everyone knows with some of the darker and riskier moments of his past. It’s all a neatly packaged in a story that knows its audience. It even includes an interesting twist to set up what’s to come.

Final Verdict: 7.0, Classic Spidey action that packs a punch with a new spin on his relationship with Black Cat.