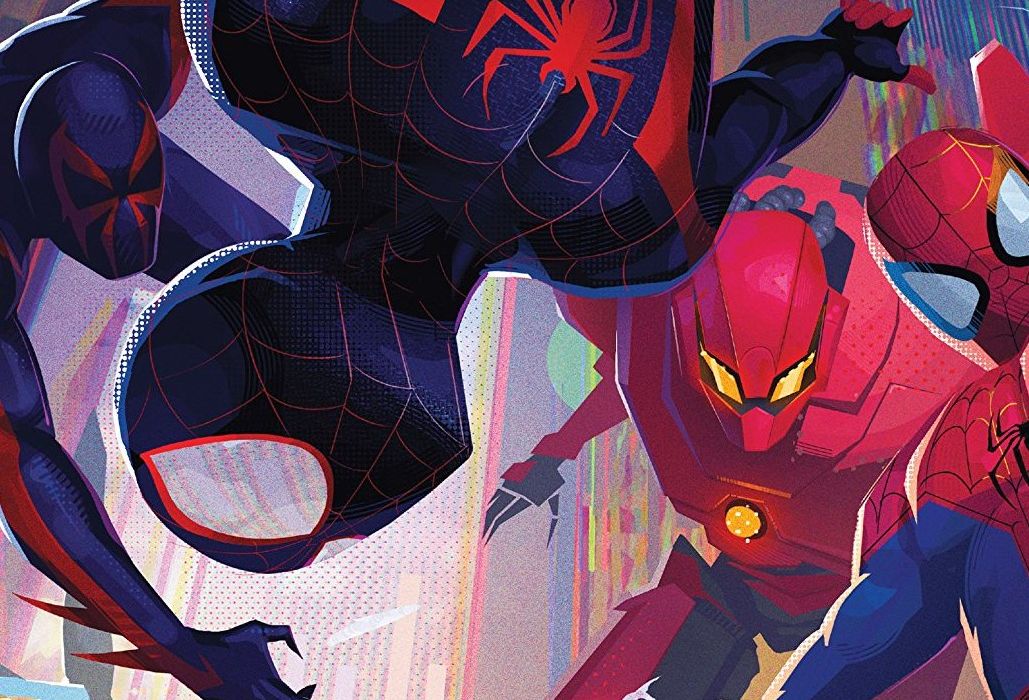 “Spider-Verse”#1 is a fun little romp through the Spider-Verse that uses a varied art team to set itself apart from the previous Spider-Adventures. Warning: spoilers ahead. 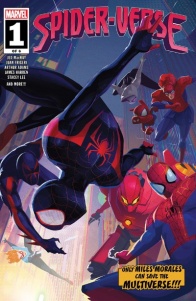 Miles Morales finally feels like he GETS this Spider-Man stuff… and then falls through a portal! But isn’t the WEB OF LIFE & DESTINY destroyed? Maybe not, True Believer. But who spun this new web? Regardless, Miles finds himself at the center of a multiversal adventure that will feature a who’s who of creators and characters as the series spins forward! And with a main cover by INTO THE SPIDER-VERSE character designer WENDELL DALIT!!! And each issue features #SPIDERSONAS from some of the biggest Spidey fans and comic creators both!

Jed MacKay and a murderer’s row of illustrators and colorists capitalize on the hype of Spider-Man: Into the Spider-Verse…nearly a year after it came out. “Spider-Verse”#1 takes Miles Morales on a journey throughout the Multiverse and shows us new and fresh Spider-Characters but is it enough to separate itself from the many Multiversal Spider-Events of the past few years? Let’s find out!

“Spider-Verse” #1 starts the story with Miles and does not waste any time getting to business with Miles being pulled into this multiversal adventure by the second page. There really isn’t a moment to get a sense of grounding in this opening scene but that tracks with the sort of breakneck pace that the rest of “Spider-Verse” #1 follows. Juan Frigeri and Carlos Lopez are the art team for this initial segment and they do a serviceable job. They skew closer to what feels like a contemporary Marvel house style, but that serves as a baseline for the number of artists we get later on in the story. The double-page spread of the web of destiny is very impressive and stuffed full of more Spider-Cameos than you can shake a web at.

The next segment appears to be illustrated and colored by Stacy Lee, which sees Miles chucked into a Spider-Gang War. The most exciting part in this scene is the main Spider-Gang member’s resemblance to Spider-Boy from the Amalgam Universe that combined Ben Reily Spider-Man and Superboy from DC. The world appears to be futuristic in a way but the setting feels too vague to get a concrete sense of what the “catch” of this universe is other than Spider-Gangs and Goblin Gangs. Stacy Lee’s illustration work is top-notch despite the lack of concrete place. Faces are incredibly expressive and there is a great sense of momentum in the action that does a lot even with this two-page pass through.

Arthur Adams and Federico Blee take us to Monsterhattan which is a really fun detour into some Kirby-esque monsters who are just as afraid of Miles as Miles is them, which is a really fun bit from MacKay. Adams also provides a Kirby and Ditko homage in the buildings on the panel that introduces Spider-Monster which is a fun touch. After that brief detour, Miles is thrown into Mad Max Mutant Road drawn by James Harren and colored by Dale Stewart, which is really fresh idea. The X-Men as irradiated antagonists in this wacky races esque car chase is really fun and Harren and Stewart’s designs really pull it off.

Miles then pops over to Spider-Punk’s world, drawn by Dike Ruan and colored by Carlos Lopez. Miles is happy to see a familiar face –well– mask. With this world not being entirely new, we get a little time to breathe as readers along with Miles even though these are still two pages of action. MacKay really does do well with the familiarity between Miles and Spider-Punk and subtly notes their shared Black identity through “brother” and “man” in dialogue. Ruan and Lopez also create very dynamic two pages.

Miles is then pulled into my personal favorite and most visually distinct of this multiversal misadventure with Sheldon Vella providing a Shonen inspired look to this world. Joe Sabino gets to do a lot of interesting lettering work with these pages by aping that style of comics. Vella really does an incredible job with these pages by incorporating a screen tone and having an excellent sense of page layout. The double-page spread of the landscape and panels of the story are a really great use of space and a smart scripting idea to break the two-page pattern that “Spider-Verse” #1 had been allowing each world. Vella also does a great job even in using the colors to tell the story, with Miles and Spider-Zero being in color because they aren’t from this world. The introduction of Spider-Zero in this art style is also really great. Her look is so exaggerated and casual that it immediately felt weird to see her in Juan Frigeri and Carlos Lopez’s style.

Frigeri and Lopez wrap up “Spider-Verse” #1 artistically by Spider-Zero explaining the stakes to Miles and setting up the rest of the series. These final few pages sort of wrap up what aims to be the premise of being a Spider-themed romp through the multiverse. The various art teams really add a lot to this particular issue and once audiences let go of the expectations of a new “Spider-Gwen” or a breakout Spider-Star, then they can enjoy the issue for what it is in terms of a fun romp. There isn’t a ton of character work in this first issue, mainly because Miles is the only one who’s on the panel for more than two pages. There is a bit with Miles’ doubting his place as Spider-Man, but that feels more of lip service to justify why Peter Parker isn’t at the center of the series.

Final Verdict: 6.9 – “Spider-Verse” #1 is a pretty fun story that doesn’t really stress itself out over story but thrives with a varied art team with fresh stories.