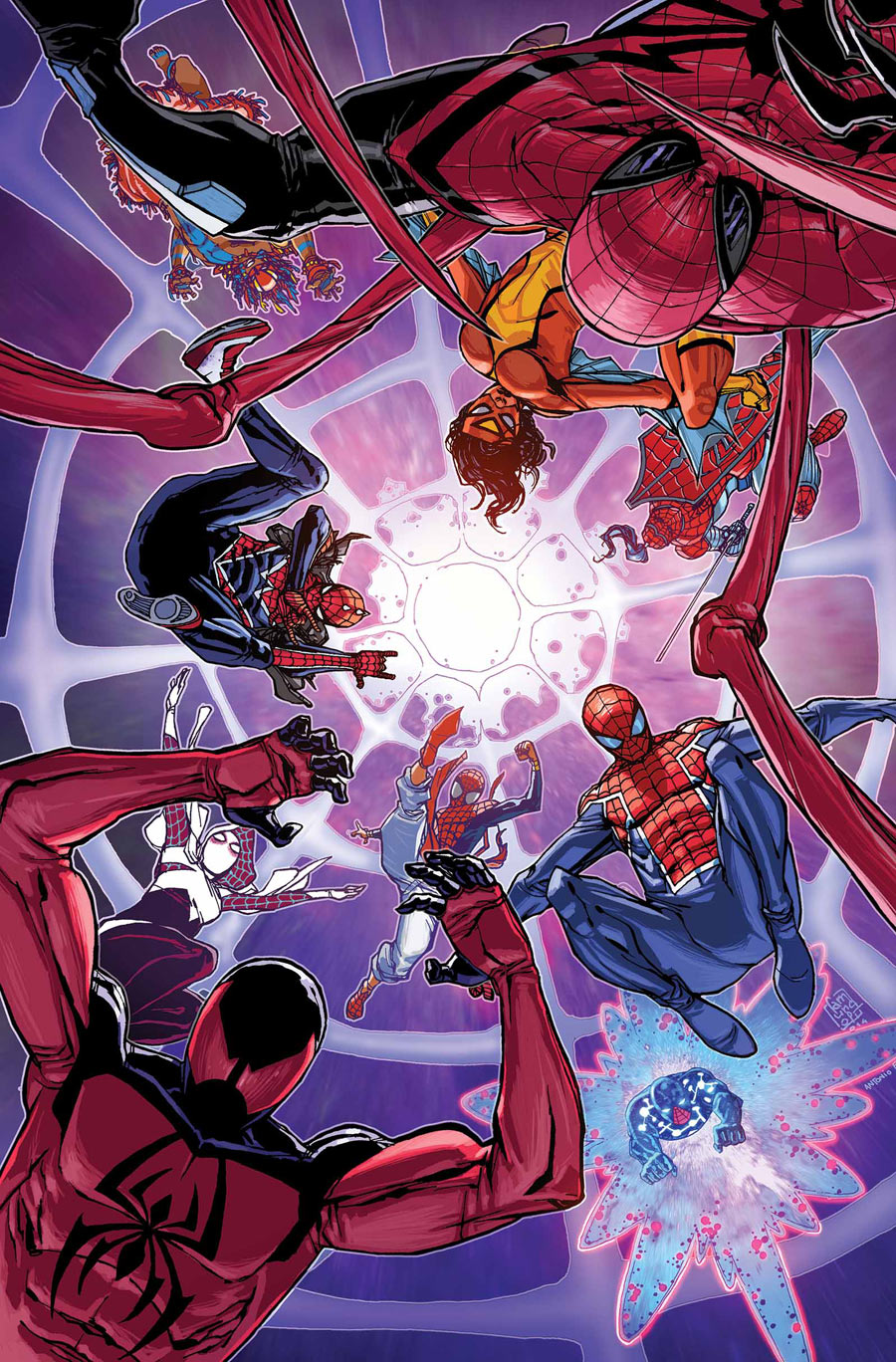 I’m a big fan of a lot of things, Marvel Comics being one of the top-tier items on that list behind professional wrestling and vegan Mexican food. And as a fan of the company, I was tapped to recap the company’s two major crossovers from 2014. “Original Sin” was a fun storyline wherein everyone temporarily lost their minds and had a good time for a few months while “AXIS” was a less-fun storyline wherein everyone temporarily lost their minds and had an awful time for a few months. Though it’s unfair and honestly pretty trite to just compare story lines to see “which is better”, it’s fair to say that the best crossover Marvel published in 2014 was the one we didn’t cover nearly as much: “Spider-Verse”. Check out our spoiler-free review of the crossover’s latest anthology issue (out of 3429) below, and why “Spider-Verse” may be the most important Marvel event of the last five years. 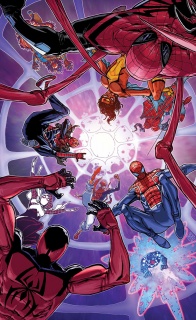 On the surface, every major Marvel storyline from the past year has been fundamentally off the rails. “AXIS” featured magic Nazi tentacles and Larry the Cable Carnage, while I can’t even begin to describe “Original Sin” despite the fact I recapped every issue. Uatu died, I think? Whatever. The concept of “Spider-Verse” is just as insane as its contemporaries: DIMENSIONAL VAMPIRES! from the VERY CENTER OF THE UNIVERSE are scouring the ENTIRE MULTIVERSE to hunt down EVERY LAST SPIDER including SPIDER-TOKUSATSU AND HIS FLYING ROBOT, LEOPARDON. It’s wild, and the internet loves it. Hell, the story didn’t even start before one of its prelude issues became so popular that Spider-Gwen immediately received her own ongoing series.

There’s a number of reasons why “Spider-Verse” has been such a hit, but ultimately it seems to come down to one aspect that sets it apart from other comic events of the 2010’s. While modern superhero comics seem obsessed with putting hero against hero, turning paragons of justice into assholes so we could justify a nine-issue long fight. Sometimes with Nazi magic, sometimes with Mark Millar; it doesn’t matter. The result is a product that seems soullessly cynical, a byproduct of a post-“Civil War” comics landscape we’re still not entirely over. “Spider-Verse”, however? If there’s one lesson to be learned from “Spider-Verse” and its infinite number of tie-ins, it’s that the creators behind this series love Spider-Man to the point where you can’t help but love the Ol’ Webhead yourself.

One of the genius aspects that makes “Spider-Verse”, specifically “Spider-Verse” #2, appealing is the open-endedness of its “Every Spider Ever” concept. This is made abundantly clear in Kathryn Immonen and David Lafuente’s story, based on the West African Spider-God Anansi. The vignette sees Spider-UK recruiting Anansi in the ongoing Spider-War by agreeing to participate in one of his many stories. It’s arrestingly charming, especially with David Lafuente’s adorable yet powerful art. Here, he builds a fantasy landscape that perfectly encapsulates the playful nature of this world in a way that makes it feel immediately familiar. With its fantastic storybook layout and succinct story, in just a few pages we’re given a fully formed character. What’s more, we’re given a fully formed Spider-Man. “Spider-Verse” isn’t just about Peter Parker, but about how the ideal of Spider-Man can find its way into so many other characters. If the final issue of the story in “Amazing Spider-Man” doesn’t feature someone talking about how “We are All Spider-Man” I will eat my hat.

Following “A Spider In Sheep’s Clothing” is a story revolving around Spider-Punk, a hero we’ve only seen in the background of the main story. To describe his vignette in a word: holy shit. Honestly, just look at this (courtesy of MTV). 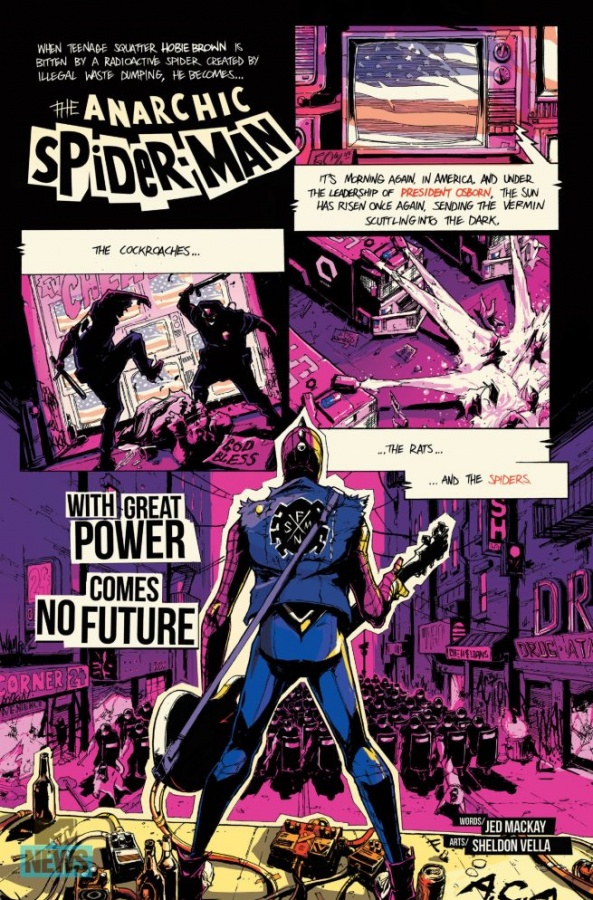 That is the first page. ‘With Great Power Comes No Future’ offers a ton of questions (“How did the US become like this?”, “Who is Hobe Brown?”) but the most pressing question is “Who the hell are Jed MacKay and Sheldon Vella and how were they not on my radar?” This section isn’t just exhilarating, it’s downright powerful. Here is a character, a villain, and an entire world that demands to be explored and within eight pages (including one killer splash page), we see a heavily condensed version of its beginning, middle, and end. “No Future” is dripping in confidence, style, and a rawness that is desperately needed by Big Two comic books. I don’t want to say more in fear of spoiling a comic that’s only eight pages, but suffice it to say that Mackay and Vella definitely need to continue Hobe Brown’s story. Leaving us with just these masterful eight pages is just downright cruel.

Over in Enrique Puig and and Francisco Herrara’s section of the anthology, we’re introduced to a brand-new luchador Spider-Man which works exactly as well as you’d think it would. Though there’s not nearly enough lucha libre, ‘The Spirit of the Streets’ still does what the Anansi story did: tell a succinct, vibrant story that broadens the scope of what Spider-Man could be. Though there’s a few gaps in the story (how this Spidey gained his powers is completely glossed over) and it is a bit run of the mill, “The Spirit of the Streets” demonstrates just how universal Spider-Man is. The story is told entirely in Spanish which is genius, not just for the whole “Why wouldn’t people in Mexico be speaking Spanish” reasons but because of the whole “universal Spider-Man” thing I just talked about. And though the English translation is a bit stiff, it’s still a great story and one that doesn’t assume English isn’t a “default” language which is always appreciated.

In addition to the three aforementioned stories there’s two mini-stories from Dan Slott, Ty Templeton, and Kris Anka. They’re adorable, especially Anka’s about a video game Spidey facing off against a digital Morlun. What’s even more interesting, however, is the story about two similar Spider-Men trying to determine what sets them apart. It’s clever, and a nice way to acknowledge that the “infinite universes” idea means that not every Spider-Man is going to be a Captain Britain or Spider-Ham. It’s a really witty side-story that would just feel distracting in the main series, but seems perfectly in place here.

Final Verdict: 8.9 – Overall, “Spider-Verse” #2 continues the main crossover’s mission of being an unabashed love letter to the spider-Man mythos. It seamlessly introduces new characters into the Spidey seamlessly and leaves the reader needing more. Not just because the characters and premises are cool, but because they’re infused with such an unmistakable love for the ideal of Spider-Man that you can’t help but want to support every new Spidey that pops up. It’s a damn shame that not every Spider introduced here is going to get their own series, but their moment in the spotlight here certainly leaves an impact. That said, Spider-Punk should be put into every Spidey comic published henceforth. Hell, put him in Infinity War.