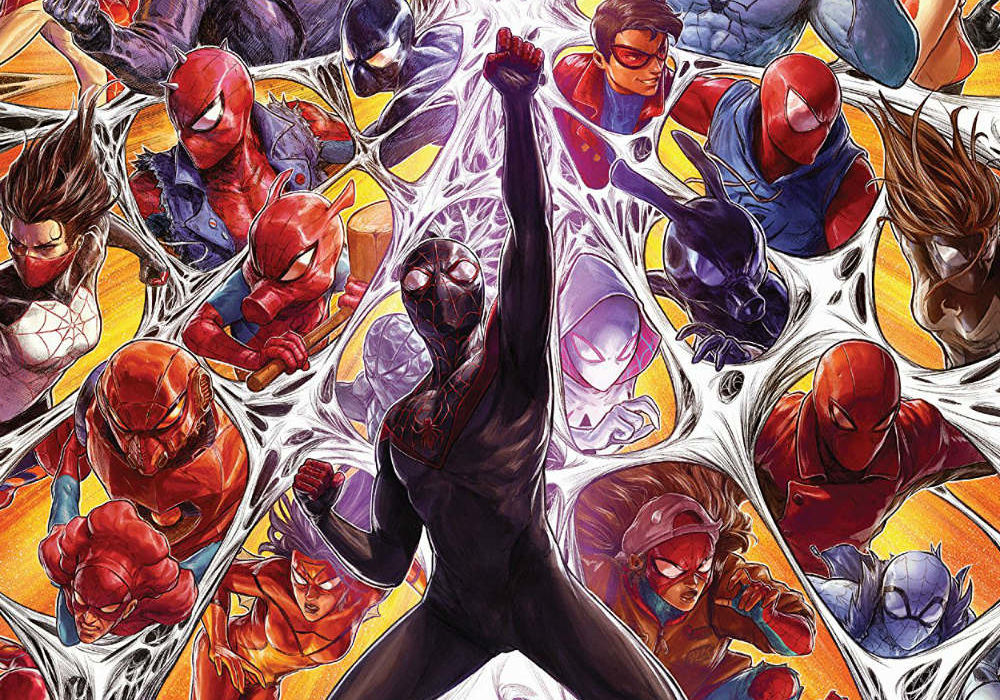 The conclusion to this latest volume of adventures set within this corner of the Marvel multiverse, “Spider-Verse” #6 manages to close all loose threads, but it still feels like an empty, generic experience. Is the formular wearing thin on the barrage of adventures told within this realm? 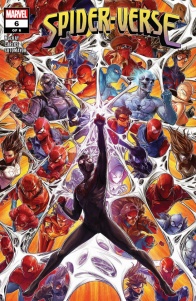 The conclusion to SPIDER-VERSE is here! All the various threads of this series (Miles Morales, Spider-Man Noir, SP//dr, Webslinger, Spider-Ma’am, and all the other Spider-People and Spider-Sonas) come together to re-spin the Web of Life and Destiny! But the journey won’t be easy, so don’t be surprised if all the spiders don’t make it through alive!

Telling stories within the spider-verse, i.e., the corner of the Marvel multiverse where a plethora of Spider-Man heroes exist and interact, has become something of a constant. Part of the blame of that are the very good early series on this realm, and of course the major animation feature film, Oscar-winning, no less. However, simply entering this dimension is not enough to warrant success, and the formula seems to be wearing thin, if this latest volume of “Spider-Verse” tales are any indication.

Talking about the broader volume first, the story of MacKay, Carlos, and team follows a similar formula. A crisis occurs that affects the spider-verse (and, by consequence, several Spider men and women), which than rally together to avert said crisis. This generates the opportunity to create new characters for the endless void, some that certainly have certain unique about their visuals, backstory, or powers. It this feels familiar to any of the readers, it is because it truly is.

Starting with the positive first. Carlos’s art is certainly kinetic and dynamic. He has a good eye for composition, which can be easily perceived on some of the splash pages where a large cast is present. Each spider person stands out, feels organised, so that the entire short comes together nicely. Carlos also manages to make facial expressions unique, making characters distinct not only by their uniforms, but rather by the way they stand and communicate. There is not much in terms of page and panel variety, but there are some very effectively done battle scenes, with strong visual cues for eye movement. The story certainly flows forward in a strong pace.

Sotomayor’s color blend nicely into the madness, further supporting the distinction among characters, their power energies, and costumes. There is plenty of heavy lifting in terms of energy signatures, and the escalating surges of power coming from the loom that becomes the focal point of this universe and story.

It is, however, on plot, that “Spider-Verse” #6 suffers the most. Readers of the entire series probably have guessed by now where Annie May is, simply because the plot revolves around a specific aspect for far too long. Like a magician failing to create distraction, the full attention on that trips the big reveal as it walks to the stage.

From then on, everything the issue has to offer is a series of battles and confrontations, which culminate on the rescue of said Annie May in something of an anti-climatic fashion. What may be more concerning, the characters on this final issue are little more than pawns in service of the thin plot, with little to no development from their own perspective.

Focusing on the positive, there are some stronger dialogue choices towards the end, and an exploration of self-sacrifice that ties thematically with the broader pathos of Spider-Man and the ever-so-present “with great powers, comes great responsibility.” The writer avoids spelling it out loud, respective the reader’s intelligence, so those final pages of the issue offer some truly compelling moments.

That said… it is a bit too little too late for its own good. Readers will likely end this issue asking what was the purpose of it all, what is the major change on the spider-verse landscape, since the entire adventure was so focused on it to begin with. Had it offered more in terms of character development, the not-so-cataclysmic ending could have been more easily forgotten, as it would have been balanced from a more personal experience.

All in all, “Spider-Verse” #6 is a solid delivery on the visual aspect, with strong composition on big splash pages, and even better confrontation moments, where illustrations and colors come together to provide a beautiful canvas, with an apt visual flow. However, the overly focus on a thin plot, without a corresponding balancing on character development, makes “Spider-Verse” #6 feel like a mixed opportunity to tell something unique within the multiverse of Spider-Man.

Final Verdict: 6.9 – Beautiful and dynamic, “Spider-Verse” #6 falls prey to an over-reliance on multiverse story tropes, with little focus to characters and a plot that leads to an unsatisfying conclusion.