Jessica Drew gets a shot at a solo title, but issue #1 kind of feels like it doesn’t know whose story to tell. 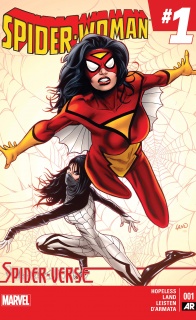 Jessica Drew has been many things – Agent of S.H.I.E.L.D., Agent of S.W.O.R.D., Avenger and so much more, but nothing could prepare her for the multidimensional insanity of Spider-Verse! War has come to anyone with spider powers and they’re being picked off one by one. The supremely powerful Morlun and his twisted family will stop at nothing to eliminate every Spider-Man and every Spider-Woman in every universe.

For better or worse, Jessica Drew’s re-introduction to the Marvel universe was always going to be under some serious scrutiny. Milo Manara’s, now infamous, pseudo-pornographic alternate cover got people talking for a lot of the wrong reasons, but all publicity, as they say, is good publicity. This issue should’ve been Marvel’s chance to silence their critics by delivering a strong, female character with depth and a solid narrative arc, but instead, “Spider-Woman” #1 is…a bit of a mess really.

Firstly, and perhaps most prominently, there seems to be a severe lack of origin in this issue. Aside from a throwaway paragraph on the first page readers are given next to no information as far as power-set, motivation, or characterisation goes for their titular character. Spider-Woman has been elected by Peter Parker to essentially baby-sit ‘Silk’ a talented but inexperienced Spider who could be the key to the safety of every Spiderman, woman, and child who’s ever existed. The issue picks up directly from the current “Spiderverse” crossover that’s affecting spider-totems across the Marvel universe and the choice is an understandable one, I’m not disputing that Spider-Woman would be caught up in the whole Spider-Crisis that’s happening, but from the outset of this issue you can’t help but feel like the title of this series is focusing on the wrong Spider.

Opening Spider-Woman’s debut title in the middle of a crossover event this immersive seems like a questionable move as it definitely alienates not only the casual reader, but anyone who’s not fully briefed on the goings on of about a dozen Spiders at the moment. Having Jessica play second fiddle to a larger storyline in the opening issue of her own series makes this book seem like an optional extra rather than a new must-read.

Hopeless does a decent enough job with what I can only assume was a pretty restrictive brief. The dialogue between spiders flows comfortably enough, although he labours the plot point of ‘Silk the inexperienced newbie rebelling against Spider-Woman the jaded veteran’ a little hard, to the point that I found it hard to empathise with Spider-Woman’s position all that much. Even when thought-bubbles appear to give us an insight into Jessica’s inner feelings they’re almost exclusively geared towards Silk, or the situation at hand, offering little in the way of personal motivation or even personal conflict. It seems as though she’s been roped into this whole event simply by virtue of having powers that are too close to being a spider’s for her to have avoided it completely.

But what’s most telling, perhaps, is that when the villains do appear, they’re barely even interested in Spider-Woman, viewing her more as collateral damage/an annoyance in the way of the more appetising spiders. And if your title character isn’t even the most interesting Spider-Person in your narrative then it might be time to re-evaluate the focus of the story.

Land’s execution of an multiple alternate reality New Yorks, complete with cyber-suited, hoverboard-riding street thugs and tame dino-steeds are pleasing enough but there’s nothing unique to hang onto here. It’s a first issue with no new characters, no new costume designs, and largely recycled scenery, so it’s understandable that there isn’t too much to get excited about, but this issue does still feel largely paint by numbers as far as art is concerned. Facially, Land still isn’t providing much in terms of variance of expression and, given that most of the characters involved are either partially or fully masked this could be justified with a lack of canvas to work with, but if Spider-Woman’s minimally expressive panels are anything to go by, this book could end up being far more stoic than any spider-book I’ve read before.

Ultimately, my biggest gripe with “Spider-Woman” #1 isn’t that it’s terrible, or even that it’s execution is thoroughly confused, it’s simply that it’s so very forgettable. Rather than feeling like the passion project of a creative team with an inventive storyline to tell this issue feels like a sub-par addition to the “Enter the Spiderverse” mini-series. The similarities are all there, except that each of those issues managed to portray a decent enough origin story alongside their addition of depth to the larger event they were tethered to.

I’d say that Silk probably sums up my feeling towards the wasted opportunity of a first issue better pretty concisely when she says “It just sucks that I finally get to hang out with the Spider-Woman, and it turns out she’s a friggin’ stick-in-the-mud”.

Final verdict: 5.3 – If you’re following the Spider-Verse storyline you’ll probably need this to complete the collection. If not, I’d save yourself the money; it wouldn’t make much sense anyway.