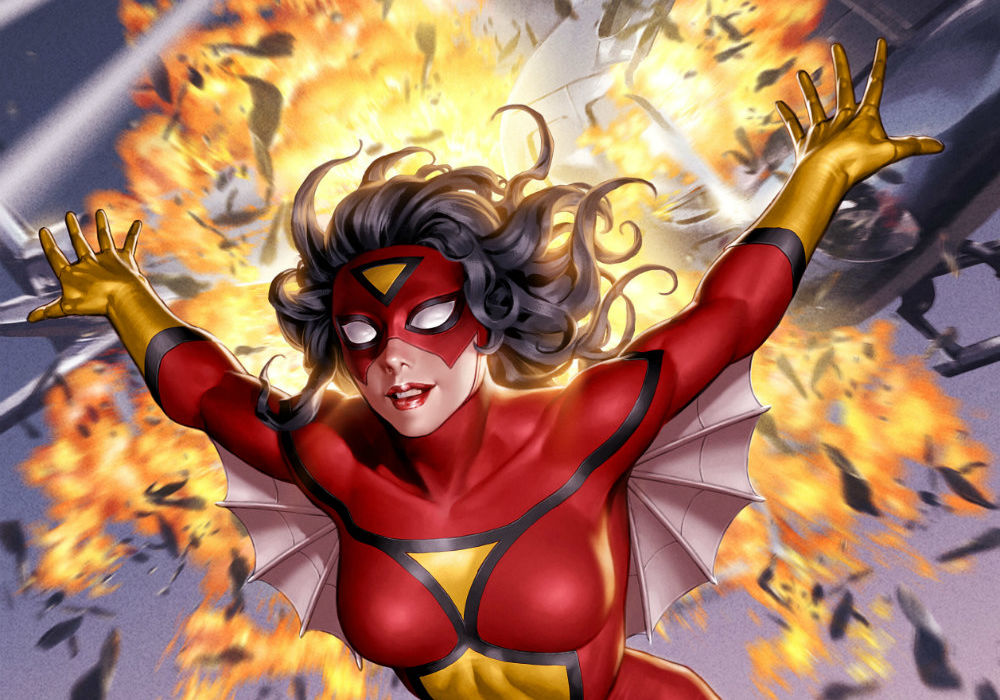 You know them! You love them! It’s time to read all about the newest comic starring your favorite wall-crawler. Wait, what? No, I’m not talking about Peter. The one with the cool red and black costume!…No, not Miles Morales either. Come on guys, you’ve got this. I’m talking about Captain Marvel’s best friend, Jessica…no, not Jessica Jones! I’m talking about the one and only Jessica Drew, star of the new “Spider-Woman” #1. 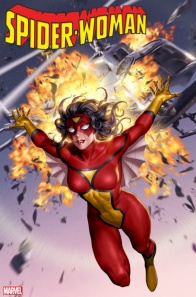 Written by Karla Pacheco
Illustrated by Pere Pérez & Paulo Siqueira
Lettered by VC’s Travis Lanham
Colored by Frank D’armata
SPIDER-WOMAN IS BACK, AND PULLING NO PUNCHES! Jessica Drew hasn’t been feeling like herself lately (she’s not a Skrull, we promise). When the angry, irritable, and unwell Spider-Woman takes a simple security gig to help get back on her feet, she finds herself besieged by unknown forces out to destroy everything around her. What’s wrong with Jessica? Just how DID she get this job? And who are these violent lunatics who keep trying to blow her up? WHO CARES? Does Spider-Woman have someone to punch? THAT’S ALL THAT MATTERS. An explosive new series that pushes Spider-Woman into new heights of action and adventure from the mad minds of Karla Pacheco and Pere Pérez, this is the Spider-Woman book you’ve been waiting for!

Obviously, this is the first issue of “Spider-Woman” but I really think special attention should be paid to that fact. The #1 of any comic, be it a mini-series or ongoing, is very important. This is where we get a feel for where the story’s headed as well as the new creative team’s take on the character. For any new reader looking to get into Spider-Woman, this (or the #1 of another volume) is a potential and likely jumping-on point. So with all that in mind, what happened in such a momentous comic?

Spider-Woman fought goons on a yacht and got sick.

It may be an over-simplification but that really does cover the whole main story. An unusually irate Jessica’s hired to protect some bazillionare’s daughter, fights off the would-be-kidnappers and gets violently ill in the end. Maybe I’m holding first issues up to an unfairly high standard but I definitely wanted more out of this comic, wanted a better showcase for Jessica’s character.

Her inner monologue is mostly exposition or commentary on what’s currently happening to her during the fight. The same is true for the dialogue. When I ask myself what I actually learned about the character, my only takeaway is that she feels angry and annoyed. There’s not really much that makes Jessica stand out here when there’s plenty of past material to work with. Spider-Woman has been a S.W.O.R.D. agent/Skrull hunter, private investigator, secret agent and single mom…there really is a lot of potential there. The final stinger in “Spider-Woman” #1, her getting sick and her powers possibly acting up, has potential too…I just wish there was more of that in this comic.

The villains, if you can call them that, are largely forgettable. They’re mercenaries with machine guns in silly sailor outfits. That’s all you need to know. That being said, it is cool to see Jessica fight them. I mean, she really beats the absolute crap out of them. “Spider-Woman” #1 is almost nothing but superhero action and artist Pere Pérez makes sure there’s never a dull moment. Visually, the comic is a lot of fun.

The fight is kinetic and full of energy and there are plenty of stand-out moments too. The very first page where Drew bloodies up multiple goons against a dark background makes for a great start. There’s also lighter moments where the heroine launches a chocolate fountain at one goon and chucks an annoying little kid at another. I particularly liked when Jessica flashed a predatory smile at the bad guys through the glass before smashing it with a powerful kick.

Then there are the really big action moments from Pérez that are like something out of a summer popcorn flick. At one point, Spider-Woman uses her powers to jump-start an electric sports car and drives it off the yacht, sending it flying down into the mercenaries’s getaway boat and blowing it up. She also uses the yacht’s anchor to grab a helicopter in mid-air and send it crashing into the water before using her venom blasts to blow it to kingdom come. It’s all very entertaining, I have to say. Jessica Drew definitely earns her paycheck with superheroics like that.

Even the final stinger is intriguing in it’s own disgusting way. After Jess throws up a glowing-green liquid, she’s left face-down on the yacht’s deck right in the mess. Spider-Woman stares with wide, horrified eyes at her reflection in the green liquid that now bubbles and sizzles and forms the shape of her emblem. Again, an intriguing ending.

The back-up story proves less intriguing. It’s basically just more exposition, showing Jessica fighting alongside ‘Strikeforce’ and getting her new costume before taking the gig she was on in the main story. Paulo Siqueira’s artwork felt really similar to Greg Land’s, which is okay I suppose. More often than not, it isn’t really my cup of tea though. Also, I have to say, the reasons for Jessica’s new costume don’t really make sense? She wants something “normal-ish” to blend in for normal work but that’s definitely a superhero costume. It’s actually funny because Kris Anka’s previous design, with the glasses and discreet jacket, is actually perfect for what she’s looking for. Oh well. The page where she’s showing off the new look is pretty cool. All in all, the entire comic is pretty cool…with a lot of room for improvement.

Final Verdict: 6.5 – Marvel promises that “This is the Spider-Woman book you’ve been waiting for”…maybe not quite yet though.