Gerard Way and Jake Wyatt team up to bring us the last in a series of other-worldly one-shots setting up for an inter-dimensional battle that could spell disaster for every Spider-Man, Woman, and Child we’ve ever known. 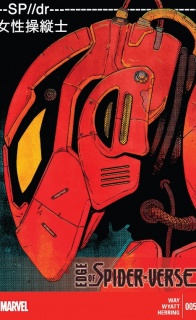 What or who is SP//dr? Introducing a new character to the Spider Verse!

“Edge of Spider-verse” has been a beautifully left-field introduction to Marvel’s upcoming Spider-Man crossover event. Each issue in the run has been a one-shot that gives a previously unknown Spider-Person from parallel dimensions a chance to strut their stuff, simultaneously widening the scope of the Spider-verse and opening audiences up to the true deadly potential of arch-villain Morlun’s plans.

When this was originally teased, way back in dim and distant August, the issue that everyone was raving about was Jason Latour and Robbi Rodriguez’ “Edge of Spider-Verse #2” – AKA Spider-Gwen. While Latour and Rodriguez really hit it out of the park with their incarnation of the friendly neighbourhood Spider-Gal, every issue of “Edge of Spider-Verse” has been pretty stellar so far, with each creative team bringing something new and interesting to the table — and this week’s offering from former My Chemical Romance frontman Gerard Way and relatively unknown artist Jake Wyatt doesn’t disappoint.

Way and Wyatt’s incarnation of Spider-Man is Peni, a pre-teen denizen of the Parker clan who’s origin is heavily influenced by classic manga. After the death of her father, this universe’s original Spidey, Peni was the only one with the genetic code necessary to take up the mantle (and mech suit) of SP//dr. And that’s pretty much all you need to know about her; the standardised origin story of Peter Parker is so ingrained on the communal consciousness of comic-book readers that every issue of “Edge of Spider-Verse” has been able to largely bypass exposition in favour of action, giving the creative teams a chance to shake up the traditional formula and deliver something that feels familiar, and yet fresh at the same time.

#5’s particular brand of Spidey is executed perfectly by Jake Wyatt’s art. His homages to classic manga can be seen in almost every panel, from the Japanamerican near-future city-scape to the colour choices, to the character design, right down to glimpses of iconic manga characters in the backgrounds of choice scenes. Wyatt has done his homework to craft a universe that would slot right in between Akira and Cowboy Bebop on your shelves (if you’re shelving your comics by tone instead of alphabetically, of course).

Most importantly, his work on the SP//dr suit is phenomenal. The interlocking elements and exaggerated limbs echo back to the EVA suits in “Neon Genesis: Evangelion” but Wyatt has co-opted this style and keep the fluidity of a human Spider-Man. Furthermore, his balance of swooping, action packed splash panels and close-ups mean that you’re able to get the full scope of SP//dr’s physicality without losing Peni’s humanity.

Way’s scripting is paired pitch perfectly with Wyatt’s art to create something that flows like a neo-noir epic in the making. He’s crafted an introverted protagonist who doesn’t quip with most Spidey’s usual finesse but instead listens to music while she fights, which gives him the chance to eschew traditional thought bubbles in favour of lyrics which mirror Peni’s emotions in a more abstract, poetic, fashion.

His dialogue, when it comes, is in snatches of what could be seen as super-heroic existentialism. Way has isolated Peni’s key hang-ups and opens her up to the audience with a vulnerability that plays well against the physical strength of her super-suit. Way’s confidence with the source material means that we’re able to really power through what could have played out as a whole six issue arc in the first few pages of this issue. He’s aware of his target audience and their familiarity with the Parker mythos which means that he can spend more time subverting and expanding on it with his own variant. The issue never feels rushed, and Way and Wyatt’s ability to balance Punk-Rock levels of violence with subdued, contemplative super-speak makes for a universe that I’d be happy to read more of. Their well-paced world-building means that, by the time Peni’s whisked away to join the Spider-Corps, you already feel like you’ve been with her from the start and seen her progress.

Given the calibre of other Spider’s that have been recruited for this mission, including fan favourite Gwen Stacey, and combined with the fact that Morlun has already proven a more than worthy adversary for almost any Spider One-on-One, “Edge of Spider-Verse” is opening itself up to be a potentially heart-rending run. There will doubtless be casualties and, if Dan Slott and his team of creatives carry on building relationships as quickly and effectively as this one then this crossover is set to carry all the weight that a good Marvel event should do.

Final Verdict: 8.5 – Fresh, fast-paced, and full of reverent references to its roots. This one-shot is a must have for fans of both Spider-Man and Manga.