Scott Westerfeld (author of the Uglies and Leviathan series), Alex Puvilland (artist of “Templar” and “Prince of Persia”), and Hilary Sycamore (colorist of “Battling Boy”) team up for “Spill Zone,” the first volume in a series from First Second Books. 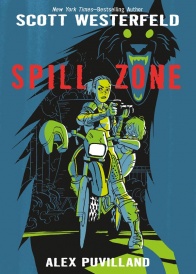 Nobody’s ever really explained the Spill. Was it an angelic visitation? A nanotech accident? A porthole opening from another world? Whatever it was, no one’s allowed in the Spill Zone these days except government scientists and hazmat teams. But a few intrepid explorers know how to sneak through the patrols and steer clear of the dangers inside the Zone. Addison Merrick is one such explorer, dedicated to finding out what happened that night, and to unraveling the events that took her parents and left her little sister mute and disconnected from the world.

I’m not the kind of person that likes reading a book on a computer screen—I distance myself from it when I can—which is probably why a lot webcomics I’d really enjoy seem to slip under my radar time and time again. “Spill Zone” kicked off early October of last year, but I only discovered it about two weeks ago. However, despite being digital, I got sucked in big time. That’s not a common experience for me.

A big part of that is the way Scott Westerfeld, Alex Puvilland, and Hilary Sycamore work together. Honestly, I’m rather surprised that this is Westerfeld’s first solo comics writing project, because he displays a tremendous amount of trust in his fellow creators. Often times a prose writer switching to comics tends to overwrite at least a little, but Westerfeld seems entirely comfortable with stepping back and letting the art tell the story. And I don’t just mean this in a page by page or even scene by scene way—the whole story structure is built around important pieces of story information being revealed visually.

The story itself is tailor-made for comics, with the Po’Town spill zone itself being a major visual component. Addison, the main character, also serves as the narrator, and it’s easy to see how the narration could have been used to do more of the heavy lifting, especially in terms of Addison’s emotions. Interestingly, most of the emotional content is carried by the visuals instead. Being a good prose writer does not necessarily translate to a good comics writer, but Westerfeld takes to comics like a seasoned pro.

Of course, it helps that he’s working with creators like Puvilland and Sycamore.

Puvilland, comes from an animation background, currently working for DreamWorks Animation while doing “Spill Zone” on the side. And this background shows, because he has an excellent sense of scene direction. Clearly, a great deal of thought has gone into how the characters move through the panels, when to create momentum (moving left to right) or emphasise a struggle or barriers to progress (moving right to left). I don’t think the direction of travel matters as much in cinema as some film theorists would have you believe, but in a comic, where reading direction is extremely important, I think it has a huge impact. (Just take a look at the scene from pages 83 to 86, when Addison is being followed. There’s a very strong sense of momentum until she turns the corner to find her way blocked, and wouldn’t you know it, the scene direction changes.) Considering a big part of the narrative revolves around barriers and being able to get around them, this sort of attention becomes a big part of “Spill Zone’s” pacing.

Another aspect of the narrative that becomes more important as the story progresses, is the act of being observed and playing roles. Almost all the characters are two-faced in some form, whether benign or malignant, so panel composition plays a big role in telling us who is observed and who is the observer, especially as this often shifts throughout a scene. Through body language or thought balloons we get an idea of when a character is playing a role or being more genuine, but with the juxtaposition of panel composition we get a sense of how successful their deception is.

Puvilland pulls off this stuff so well though, it’s practically invisible unless you go looking for it. You feel it before you consciously process it.

The other part of the art is Sycamore’s colors, and it is by no means a small addition. Color is a big part of comics storytelling most of the time, but in “Spill Zone” it takes a bigger role than usual. The colors have the usual roles we see in most comics, of orienting the reader in time and space, separating scenes, drawing the eye to key details, and externalizing the emotional lives of the comic’s characters. In “Spill Zone,” color becomes the visual language of spill zone itself. The zone is a radically lurid, and when shown in isolation from the outside world, I think it’s easy to underestimate what Sycamore is doing here. It’s when this world is in contrast with the outside world that we see the complexity of her work.

After the hypercolor spill zone, the colors of the world outside the spill zone look comparatively dull, but the range in these scenes is actually quite vast, and each distinct from any other. Yet in any of these scenes, you can drop in a little bit of the spill zone and it always stands out. The way Addison’s spill zone photographs seem to pop off the page is so unnatural and unnerving.

Sycamore created a color language that when contrasted with other sequences always pops off the image in a way that’s far from subtle, but she can augment that effect so that it’s subtle when it needs to be too. There are moments when she slowly bleeds it into a scene without the reader immediately noticing. The result is surprisingly creepy.

Another interesting aspect of the spill zone’s color language is the use of deliberate registration errors. I found this an excellent way to externalize the way the characters feel about the spill zone, that there’s something off. But later, the effect is used even more powerfully when there are no registration errors at the beginning of a scene, but the colors drift as the scene progresses, creating an effect like a skin crawling dread.

Considering the Sycamore’s incredible work on “Spill Zone,” I must admit I’m baffled that her name isn’t on the cover. It seems a rather strange oversight, and it’s my only real quibble with the book.

This volume is just the beginning though. “Spill Zone” is the first of a multi-book series, and its focus is clearly on establishing its characters and world, while building tension and setting up its big questions. It’s not about answers just yet. There is clearly a bigger story waiting to explode out of this one, but not at the expense of making this first volume the best it can be. Book 1 works on its own without feeling confined by the story to come.

The final online installment of “Spill Zone” Book 1 goes up tomorrow, but for those that like me that prefer physical copies, there’s a nice hardcover version out today. I must admit, I really like First Second’s marketing approach on the book. I may not be the most enthusiastic digital reader, but having the story serialized online got me hooked so that I absolutely had to pick up the book. And there’s a prequel, “Spill Night,” coming out on Free Comic Book Day, which I’ll definitely be picking up too.

Final verdict: 8.5. An excellent book from a trio of creators that work in seamless unison. They’ve laid the groundwork for an engrossing series, and I’m already excited to see what the next volume will bring in May 2018.