“Marvel Legacy” is in full swing, and though many series are now numbered in the hundreds, there are still a few number one issues. One of these new series is “Spirits of Vengeance” which follows part-time Ghost Rider and full-time biker Johnny Blaze and his quasi-satanic buddies as they battle the evilest evil the Marvel Universe has to offer: the demons and devils that creep among humankind. 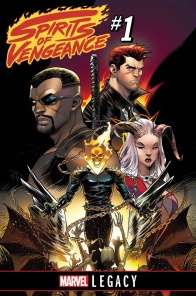 Cover by Dan Mora and David Curiel
Written by Victor Gischler
Illustrated by David Baldeon
Colored by Andres Mossa
Lettered by VC’s Cory Petit
WAR AT THE GATES OF HELL Part 1 A dead angel. A silver bullet. A kept promise. For ages, the war between Heaven and Hell raged in the unseen corners of society, both sides in delicate balance that could topple if the right weapons were in the wrong hands… When an undercover angel is murdered, Johnny Blaze, the Ghost Rider, must find the killers and punish them…But this time he won’t do it alone: A deadly team must rise from the darkest depths of the Marvel Universe to form an unholy alliance – HELLSTORM! SATANA! BLADE! They are the SPIRITS OF VENGEANCE! PLUS: Includes 3 bonus MARVEL PRIMER PAGES! Story by Robbie Thompson and TBA! Rated T+

“Spirits of Vengeance” is executed with basic competence. Mostly. Character voices are strong, especially that of Johnny Blaze. There’s a lot to like about the art, which is as big and bombastic as you’d hope from a comic that’s basically the story ripped off the side of a van. The problems in the issue are mostly small, nit-picky things, but as they add up they start to overwhelm.

Take, for example, the action scenes. Ghost Rider is one of the most powerful characters in the Marvel Universe, practically invincible and armed with a slew of over-the-top powers, especially his penance stare. When Johnny first goes full Spirit of Vengeance to take out a pair of demons, every panel looks awesome, but it is hard to tell what is happening panel to panel. There’s fire, there’s screaming, there are creepily-designed demons crawling, but there’s no sense of time or space. Every image could be frozen on the side of that van and look great, but it’s the responsibility of comic book storytelling to connect those images.

When we first meet Johnny, he’s at a biker bar, being his laconic blue-collar self. It hit me early on, lots of Marvel heroes are pretty well off (either from being super scientists or being taken care of by the government) and almost all of them are urban. Even Hawkeye — an abused kid from Iowa who ran away from home to join the circus — is now a Brooklyn hipster. Johnny Blaze is one of the few Marvel characters representing the country roads of America. In his origin story, he’s a motorcycle stunt rider, but he could just as easily be part of a derivative NASCAR show.

This is emphasized when he finally meets up with Daimon Hellstrom. The Son of Satan, who I last remember being part of Baron Zemo’s Masters of Evil, is now a dapper, suit-wearing gentleman. This is one of my nitpicks. There’s no word on how Hellstrom went from living in an underground city working with neo-Nazis and demons, to suddenly owning a creepy manor. Even though it’s a good premise, it breaks with continuity in a distracting way. I don’t remember ever seeing Hellstrom wear a shirt, much less a jacket and tie.

Setting Johnny and Hellstrom up as a duo in this way is a cool idea. It emphasizes Johnny’s salt-of-the-Earth characteristics while casting Hellstrom as a sophisticate. Even though it makes for a cool visual, the issue never really does anything with the idea. It’s so obvious from the art that these two are supposed to be contrasted, but the story squanders what could have been an interesting new relationship for these two characters.

By the end of the issue, the Daywalker himself makes a dramatic appearance, but Blade doesn’t yet join the team. It was there “Spirits of Vengeance” sort of lost me. The villains have cool designs, but I have no idea what their greater plan is. Even in the immediate, it’s unclear what evil they are perpetrating, besides being demons and looking metal as all hell. It’s clear the team is going to assemble based on the cover and the backup feature, but they haven’t yet, nor do they have a reason to. This comic is so decompressed, this first issue doesn’t include a full mystery, or even the start of one. It’s more like the teaser for an eventual mystery.

That’s a lot promised and not a lot delivered. Not a great way to introduce a first issue to a new series. Even major fans of Johnny Blaze and Blade (such as myself) have little to cling to. There’s not an obvious setup that draws you in. There’s not a reverence for continuity that plays off of nostalgia. It’s a brand new story for better or worse, and it’s too messy to get a good read on.

The best thing the issue has going for it are the designs. In the hands of the wrong artist, demons can look like blobby people. Not so here- the various demons, necromancers, and mystical informants all have unforgettable looks. One villain looked so iconic, I found myself desperately googling to find out where I had seen her before. The answer was nowhere, she just fit right into the Marvel Universe. David Baldeon is the right artist for these characters.

It’s possible I’m being harsh. Maybe “Spirits of Vengeance” will deliver. It certainly has the potential to bring “Hellblazer” style dark magic mysteries to Marvel. That’s a wonderful idea. If I could review a comic based on potential, “Spirits of Vengeance” would get high marks, but I’m only reviewing this first issue. As it stands, it’s a bit of a mess.

Final Verdict: 5.5 – The designs may be rad as heck, but “Spirits of Vengeance” is a muddled and confusing first issue.