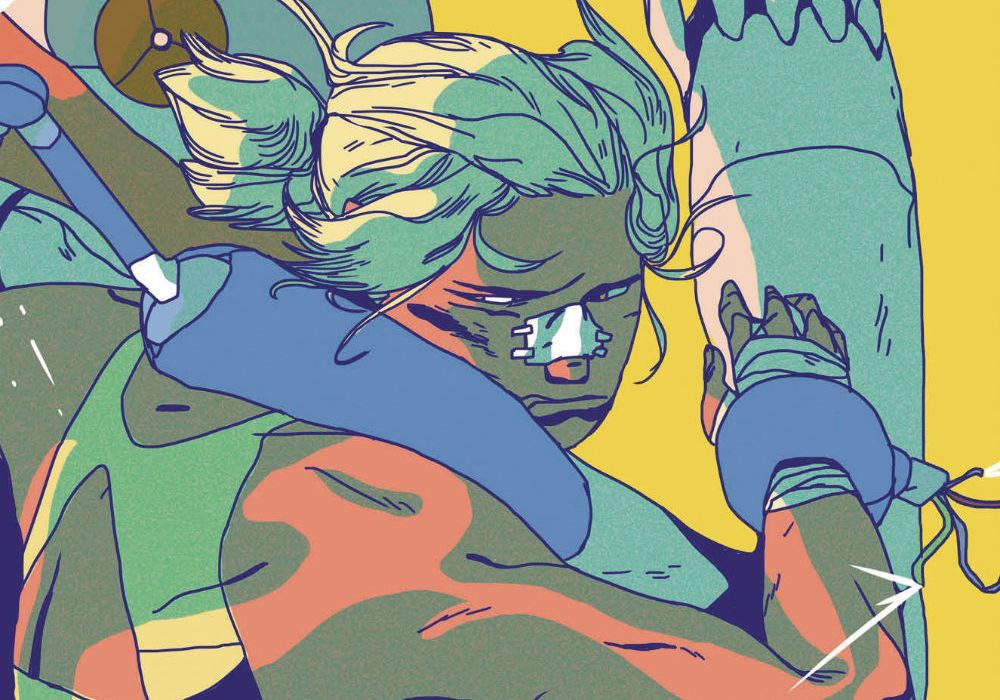 As Vault Comics continues pumping out new books, how will this one fare? Read on for our review, which contains some spoilers. 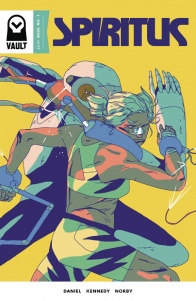 A champion fighter convicted of murder, Kinju Dayal faces automated confinement: The transfer of her consciousness into a state programmed labor machine. But a ruthless underworld boss diverts Kinju into a vessel unshackled from its rigid programming. Only Federal Marshal Rueben Reveles stands between the armored warrior and sanctuary.

“Spiritus” is the type of book that surprises you by not surprising you. You start reading, going through the motions as usual, and before you realize it you’ve read the entire issue, fully understood every concept that’s been thrown at you, and are excited for more. There’s a rare smoothness to “Spiritus” that sets it apart from other books, and it proves you need far more than concept alone to sell a story.

As a book that plays with themes of identity, the switch between personal and impersonal perspectives keeps us engaged from the start. The first scene has our protagonist, Kinju, meeting with someone in an undisclosed location and giving out small personal details as necessary. We can feel her unease at the situation, and we immediately relate to her struggle.

Pretty soon, though, we switch from this personal view to a completely impersonal government informational video. The video’s primary purpose is to give us some exposition on the type of world we’re dealing with, as well as the situation Kinju is fated to face. But it never feels like a slog, or even like exposition, because of the shift from personal to impersonal. As soon as the video finishes, the man in the room makes a completely personal comment to Kinju about how, according to that video, she will be treated like “[literal] shit.” Again, we shift back from impersonal to personal. It’s a smart device that keeps us engaged through potentially dry material, and sets up some of “Spiritus”‘s greater themes to come.

Kennedy’s art in these early scenes sets the mood equally as well, using a scratchy, imperfect line to depict characters and making heavy use of color to set the scene. It’s great that Kennedy does his own color work, because I’m not sure how good his linework would work without it, and vice-versa. Together, though, they play off each other to fill in the information the other lacks, coloring figures as blocks with one or two tones each, which may or may not match the background. Kennedy’s art is sufficiently grounded and impressionistic, drawing us in with both style and substance.

As “Spiritus” continues, we eventually get a major plot twist where Kinju’s consciousness transfers to another body. In the lead-up to that scene, Daniel uses some interesting strategies. With a six-panel grid, the three panels on the left side of the page depict the people who are expecting the situation to continue as normal, while on the right, you have the people who are manipulating things so the spirit transfer will occur. Juxtaposing their reactions, we end up with a much stronger scene than if we were to have seen only one side, building tension by contrast.

In the scene right after the spirit transfer, Kennedy also goes for some unconventional techniques. In particular, he makes use of the fact that he is both illustrating and coloring. To depict Kinju’s new sense of sight from inside a machine, he uses black as the color for everything except his linework and colors his lines with a mixture of teal and salmon sections. It’s a strange and disorienting palette, as disorienting as it must have been for Kinju herself after awakening in this new body. Kennedy also uses a similar unconventional color palette when looking from the outside of the body, a strange mixture of dark blue-greens and pinks. Everything works to create an unsettling atmosphere for this unsettling situation.

Technically, I think “Spiritus” is great. Especially as a first issue, this issue sets up the story with ease and provides a smooth and engaging read. Probably the biggest negative, though, is how the entirety of the issue’s story is summed up on the back cover. Now, this could also be seen as a good thing because it means the book has a strong core concept (and it does!). I don’t, however, think the story we get has enough to beg readers to pick it up here instead of next issue. There’s no deeper themes that get played with (though they are set up), and the scenes play out pretty much how we could have imagined. Ultimately, it’s down to the quality of the writing and art to get people to check out this issue. And I do think those are strong enough.

In all, this was a wonderful start to a new series. With engaging scenes that pull you into the book’s world and some fascinating art to depict it, this first issue of “Spiritus” has a strong enough creative force behind it to push it beyond the sea of new number ones out there. Even the strongest concept needs to be executed well, and these creators deliver in a marvelous new way.

Final Verdict: 8.2 – A fantastic debut, the creators make the experience of reading this issue far better than you could imagine from the concept.