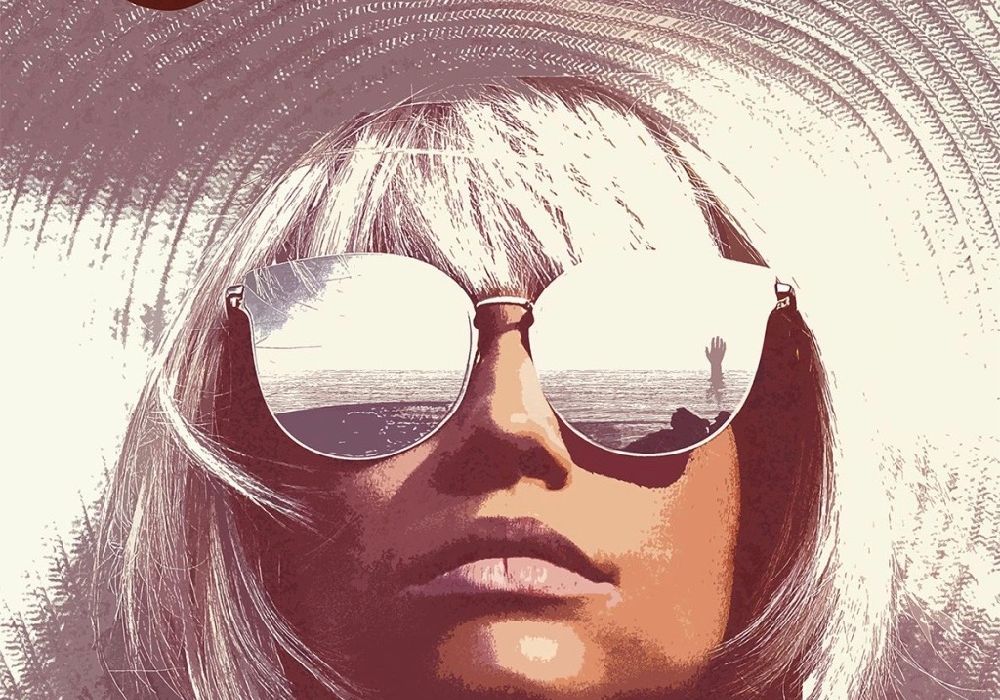 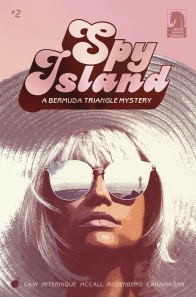 Super-agent Nora Freud is fine, thank you. Yes, she’s stuck on an island in the Bermuda Triangle without a clear mission. She’s running low on sunscreen. Her sister has just arrived. And the body of a man Nora recently assassinated just floated in with the tide. But. She. Has. This. Totally. Under. Control.

Glance at the title page for “Spy Island” #2 and you’ll see a list of creators with all of the usual titles, plus two artists credited for “Supplemental Art.” Two issues into a four-issue run, I think it’s safe to say that the art created by Lia Mitternique and Stella Greenvoss is anything but supplemental. It’s as vital to the story as the colors or lettering. Is it an aesthetic choice? Of course. But it’s also much more than that.

The two-page spread that immediately follows the aforementioned title page is a great example. Illustrator Elise McCall’s layout is perfect. A short panel on top runs across both pages. Tiki torches light a beach at night. The waves are calm, the stars are out and Connie stands off to one side. She is completely alone, staring out at the water, her dress blown by the light breeze. It’s a melancholy, tranquil scene.

Right below that, however, back on the left-hand page is a recap of the first issue, as written by Connie’s sister, Nora Freud, the book’s protagonist. “I looked amazing,” she begins, proceeding to take us through a series of Polaroids with all but the last picture drawn by Elise McCall and colored by Rachelle Rosenberg. Meanwhile, the text is handwritten in cheap black marker with red arrows that guide us from one statement to the next. There’s a photo of a button from the Bermuda Triangle Preservation Society that has a 3D quality to it, and the last Polaroid is also an actual photo of “a guy Connie dated in high school.”

“I rest my case,” Nora writes.

Below that is a large panel that halfway looks like it could be a movie poster or maybe an invitation to tonight’s big shindig, Call to the Kraken. Except there are little vintage black plastic labels with embossed white letters plastered over the top of each character, giving us an additional layer of supplemental art and cheeky commentary. “Doug Something” is the name of the first character. Elsewhere in the book, there are additional random photos, as well as a two-page drink menu from a hipster tiki bar. “Toy plane included,” one drink reads. “Collect all five!” On another page, the contents of Connie’s purse, each of which is a photograph, are laid out orderly in a photorealistic collage.

The overall effect is campy, stylish, retro, meta and fun as hell. There are stories within stories within stories. The tone is wistful, yet haunting. Everyone is half on vacation and half on the clock. Mixing business with pleasure with subterfuge and espionage. There’s a mysterious plotline that runs, twisting and turning through it all, but it’s almost unnecessary. Chelsea Cain’s dialogue is brilliant and the characters well imagined. It’s their relationships—or lack thereof—that keep us turning pages. It’s like some kind funky mashup between “Fantasy Island” and “Mysterious of the Unknown.” (Is Vlad Popov actually Tattoo…?)

McCall’s illustrations are fantastic, with outstanding designs for both the mermaid and kraken, but her other characters also shine. Harry Fauntleroy, for example, is sufficiently James Bond-esque, but also happens to wear a Union Jack banana hammock, completely befitting his adolescent, countess-chasing ways. Nora is stylish and nearly elegant, but sports bikini tan lines that constantly peek out of her clothes. These are damaged characters who seem to have traveled the world only to end up on this godforsaken island, accessible only by boat, with a new shipload of tourists each week.

Rachelle Rosenberg’s colors completely hit the mark. Again, the kraken is stellar, a great blend of cool and warm colors. It’s haunting, violent, bloody – but never strays to far from camp and quirkiness. The “supplemental” additions of a Bermuda National Archive, Division of Photography label affixed to the supposed photograph and a folded newspaper article paper-clipped to the other side are genius. Throughout the book, however, Rosenburg’s vibrant colors either give everything an edge, or take the edge off, according to plan. The purples are luxurious, suggesting a perpetual twilight, while sparsely used yellow and orange hint at campfires off in the distance.

Narratively, there’s a great twist at the end, deepening the mystery and bringing everything back to a very human level. The characters, in some respects, are made-for-TV and larger-than-life, but Cain also keeps them nicely grounded, vulnerable and real. With a mere two issue left, I fully expect things to catapult to a rollicking conclusion. Let’s just hope this first book is one of many to come.