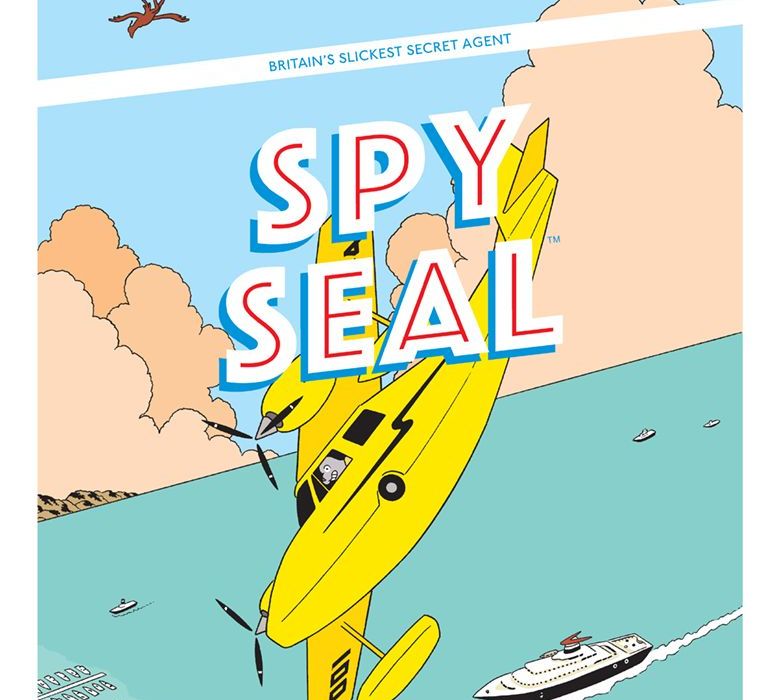 Bond might be the suavest agent on Her Majesty’s secret service, but our new friend Malcolm just might be Britain’s slickest super agent – it says so right on the cover, so it’s got to be true. How do the escapades of Rich Tommaso’s intrepid pinniped fare this week? 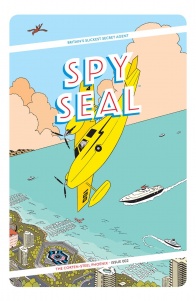 ‘THE CORTEN-STEEL PHOENIX,’ Part Two. Malcolm Warner, aka SPY SEAL, takes off to the beautiful French Riviera on his first assignment for THE NEST. There, he meets his contact, KES–-a seasoned agent who is sent in to guide him through this very tricky covert mission.

“It’s not easy for any spy in the beginning,” says Kes, after revealing to Malcolm that his good-natured over-enthusiasm has made a mighty sticky wicket of his first ever assignment.

In the wonderfully composed scene that opens “Spy Seal” #2, Rich Tommaso gives the headliner a certain, cane-swinging grace as he strolls into the suspicious Phoenix Gallery. Under the guise of an art dealer named Falconer, Malcolm’s clad in a tan overcoat and hides his face behind tight, circular spectacles and a tidy black goatee. There’s an over-earnestness to this look that, along with Tommaso tipping his hat that this aesthetic is most likely Malcolm’s overall impression of how the moneyed class look and act, stands in stark contrast to the Bohemian-chic of the artist working the display room.

There’s elegance and deceptive simplicity to Rich Tommaso’s smooth design sense, so you can be sure the seal cuts a dashing figure. It’s just one that sticks out as plainly out-of-place as the finely manicured beard sloping off Malcolm’s chin. And that’s all before he straight-up inquires about the dubious piece of artwork he was only supposed to sniff around for. It’s that delightful lack of guile and subterfuge that makes this spy seal so endearing. Furnished by a color palette that leans heavily into bright yellows and reds, there’s an innocent exuberance to this story that harkens back to Herge’s early adventures with Snowy and that other guy.

“Spy Seal” #2 may feel like a gentler take on the super spy genre, but there’s an infectious glee seeping through these pages. Chased off by reptilian thugs wearing shoulder-holsters and black sunglasses, Malcolm is drawn running down a beachfront path with palms open, fingers outstretched to the sky, and a hop-skip-jump in his step that seems more like he’s energized by the unbridled thrill of the moment rather than concerned about any of its severity.

That’s really the name of the spy game here: bright colors and unabashed fun. I’m not sure whether Rich Tommaso set this up as an anthropomorphic tale because he likes drawing birds and mice in suits, turtlenecks and berets, or whether he just genuinely has a passion for when animals act like people. Either way, the lack of irony on display is refreshing. And Tommaso is a clever enough writer to dive into the premise in unexpected ways, that seem so obvious in hindsight.

After the botched gambit at the art gallery, it becomes apparent Malcolm’s hotel room is being watched. It’s no longer safe, regardless of the fact he’s been told to wait there for instructions on the new path forward. At this point, he notices a prostrate mouse caught snapped in a mousetrap in the corner of his room. Of course, his handler just so happens to be a mouse… And as soon as Malcolm notices a tiny brown envelope held between some tiny mouse teeth, Tommaso feeds us a panel of the handler springing upright, propping the trap open like he’s holding up an Olympic weightlifting bar, and winking at Malcolm (but really, right out at us). It seems that “Spy Seal” #2 uses its anthropomorphism as a way to reinforce that, at heart, this is a spirited romp about spies that seriously have fun being spies.

In the current zeitgeist – comics, prose, and cinema included – espionage and intrigue too often seem addled with angst, ultra-violence, hyper-cut editing, or a goulash of all three. In that context, it might feel like Tommaso’s pace lags a bit. And while there are some sequences that feel a bit bogged down in dialog, the overall rhythm is warm and welcoming into this world of the Nest and Corton-Steel. Rich Tommaso’s unhurried panels are crystal clear in their intent and propulsive when they need to be. Take the car chase through the winding, narrow streets of the French Riviera – it’s a sequence that could easily have stalled out had Tommaso been a lesser artist. But in his hands, it’s handled with swerve and verve.

Overall, “Spy Seal” #2’s classicist lines and coloring tics really take flight alongside these seals and kestrels. As usual, Rich Tommaso captures a twinge of bittersweet nostalgia, but the fact Malcolm seems genuinely bad – or at least, very rough around the edges – at this type of intrepid, adventuring is something that feels fresh. Things can only get better for him, which means things will definitely get better for us.

Final Verdict: 8.0 – Wasn’t sure if I was totally on board for this after the first issue. But this one seals the deal.