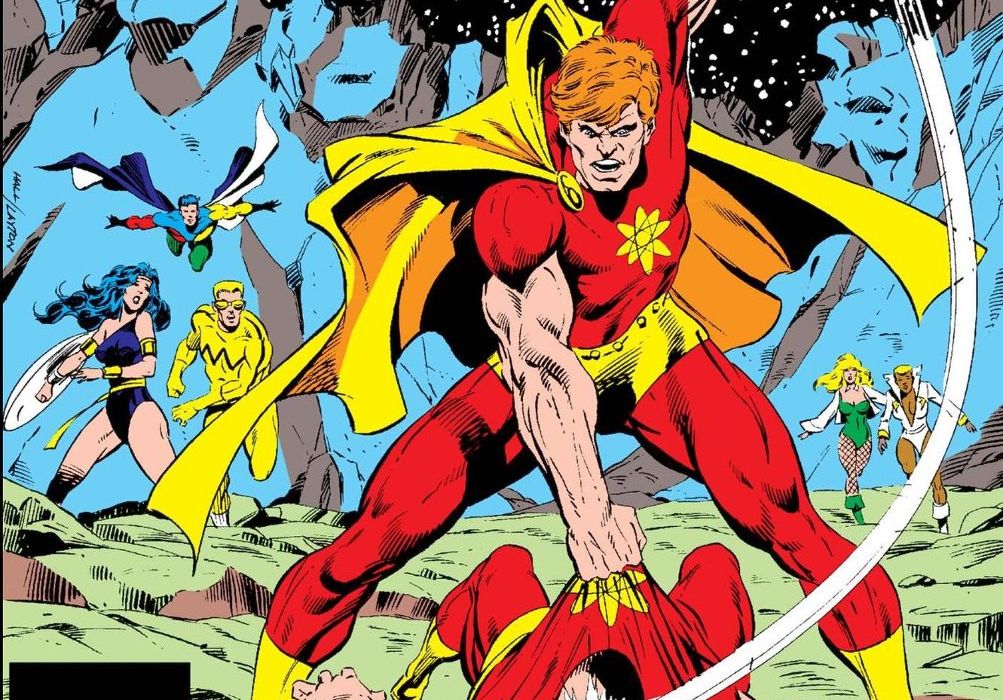 There is an evil clone within the ranks of the Squadron! Hyperion has been replaced by an extra-dimensional doppelganger, pulled into their Earth by Master Menace. But the evil Hyperion has gotten significantly less evil after falling in love with Wonder Woman-pastiche Zarda (a.k.a. Power Princess). Although he did murder her husband and seduce her as she was grieving. Maybe not quite as “significantly less.”

But if the cover is anything to go by, the original Hyperion is back. And the battle between the doubles will end in death. But these kinds of covers are usually deceptive. There’s no way the leader of this superteam, as moral complicated as it is, would murder someone, even if they w— **SPOILER ALERT** Actual Hyperion just beat him until he melted!! 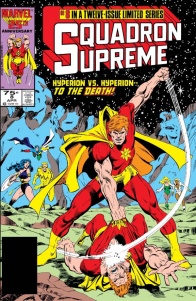 The Whizzer learns that villains have obtained technology from the Squadron’s factories as Hyperion frees himself from extra-dimensional limbo.

I’d like to start by discussing the names of the principal players in this book’s opening sequence. Issue #8 opens with yellow-clad avenger “The Whizzer,” whom narration claims originally intended to call himself “The Boomer.” If I had to guess, I would say he was born somewhere between the years 1946 and 1964. At least within this timeline. It’s still Marvel. That could slide. He’s battling two bank robbers: a cowboy-themed bandit known as “The Rustler,” and a big guy in battle armor known as “Bollix.” I’m not given the impression that Bollix is British. But for my own amusement, I’m going to pretend he is. Bollix will now sound like a Guy Ritchie villain in my head when I read his dialog.

Either way, the story opens with the resident speedster bringing down a couple of goons. The police try to stop them with their non-lethal “Gumdrop” weapons. But it’s no use. The villains are equipped with force field belts which deflect the stun blasts. After Whizzer dispatches the bad guys, we learn that the force belts are being manufactured at old munitions factories decommissioned by the Squadron themselves. Same with the gumdrop guns. We then shift to one of those factories, where former Institute member Quagmire makes the female workers uncomfortable. Blue Eagle, still heartbroken over Lark’s B-Modding, doesn’t have the patience for his crap, and punches him in the face.

This sequence gives us a slightly better understanding of the B-Mod process. Turns out it’s more akin to the A Clockwork Orange procedure. Eagle can punch Quagmire. But if Quagmire strikes back, he gets violently ill. Although there’s another twist just a page later. The forcefully reformed supervillain rushes into the factory when a conduit breaks, saving thirty workers before succumbing to the toxic fumes. So either Quagmire was a decent dude at heart, and the only reason he wasn’t committing crimes was physical illness, or the Squadron Supreme just brainwashed a guy to a very likely death.

Hard shift to a new plotline. Arcanna is getting a checkup from Dr. Decibel, confessing that she’s been hiding her pregnancy so the team doesn’t worry about her. Decibel can’t do anything because his B-Mod programming won’t allow him. Anyway, enough of that plot.

Another hard shift as not-Hyperion leads a team home after some off-panel superhero stuff, flying ahead to spend some quality time (wink wink) with Power Princess. But floating somewhere within ethereal subspace is the real Hyperion, along with our old pal Master Menace. After a bit of techno babble and a shaky-at-best promise from his nemesis, Hyperion breaks out of the dimensional prison. He engages his doppelganger in a battle that sees Mount Rushmore destroyed and a giant stone nose used as a weapon. Energy vampire Lamprey is able to discern which one’s which through… well, energy… though it’s the true Hyperion who must be restrained. The fight ends when the imposter quite literally liquifies, after confessing to the murder of Zarda’s husband.

It’s an incredible fight scene, one that simultaneously makes you wish there was a movie and reinforces the power of comics as a medium. It ends with the heartbreaking line “Soon the canyon is silent… save for one woman’s gentle sobs.”

The first half of the issue feels disconnected from the second half a bit. But that’s probably bound to happen with the litany of subplots for each member of the team. But even if they’re introduced a bit rapidly, each plot thread still works. I did expect the evil clone bit to be dragged out longer, possibly leading to the eventual downfall of their Utopia. But that may be the easy way. This series feels episodic, even as it builds towards a larger narrative, in a way that very much gives it that epic feel. And while epic is a word that’s often overused, particularly on the internet, I can’t think of a better word to describe this series. After all, there’s a fight scene where one Superman beats up another with a giant stone nose in the ruins of Mount Rushmore. That’s pretty epic.

Bob Hall’s back on art duties this issue, with most of the original creative team. While the art has remained pretty consistent for the entire run of the series, Hall has a knack for expressive characters. His Hyperion 1 is gloriously furious, while his Hyperion 2 is heartbreakingly melty. Though sneaking a peek at the neck issue, it appears he’s off again. It really is a feat that the art’s remained solid with a rotating door of creators. But I do like Hall’s work in particular.

One more note on character design… yeah, there was a Whizzer in the 40s, and that guy wore yellow. I don’t know if “whiz” meant “pee” in the 40s, but I’m pretty sure it did in 80s. 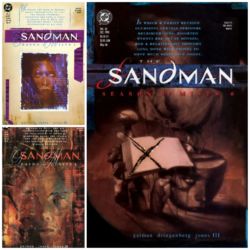 It’s time for the second act of the story of Morpheus and his journeys throughout the earthly plane – – though this time he is leaving Earth to right a previous wrong.Written by Neil GaimanPenciled by Mike DringenbergInked by Malcolm Jones IIIColored by Steve OliffLettered by Todd KleinIn this prologue issue to the acclaimed “Season […] 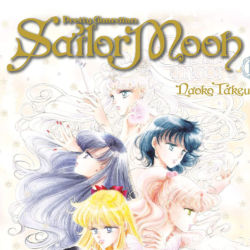 Welcome back to the Summer Comics Binge of the “Sailor Moon” manga, today we’re looking at the final chapters of the main series itself. All of Usagi’s Sailor Guardians, and her beloved Mamoru, have been slain by Galaxia and her minions. Together with the Sailor Starlights, Princess Kakyuu, and Sailor Chibi Chibi, our heroine flies […] 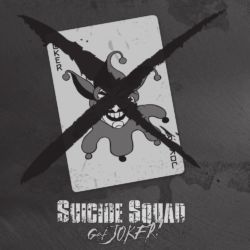 Some Kind of Suicide Squad: “Get Joker!”

We’re taking a break from digging for artifacts for a while to return to Some Kind of Suicide Squad. Originally when I did this last year there was supposed to be two more entries, the Black Label Suicide Squad minis “Get Joker” and “Blaze” and then for various pipeline delivery reasons they kept getting delayed, […]